Stephanie Perkins' 'Isla and the Happily Ever After' Gets High-Fives 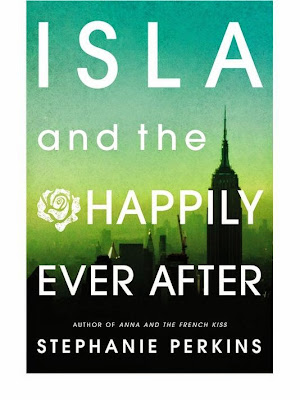 
Isla and the Happily Ever After by Stephanie Perkins doesn't arrive until Aug. 14, but it's already getting fantastic support from some awesome authors. Such as …

Rainbow Rowell, award-winning, best-selling author of Eleanor & Park and Fangirl, says, "Stephanie Perkins' characters fall in love the way we all want to, in real time and for good."

Tahereh Mafi, author of the best-selling Shatter Me series, says, "Stephanie Perkins is the Jane Austen of our generation. Her stories ache, soothe, and leave you breathless with joy; there's true magic in these pages — it's an experience you won't soon forget."

Stephanie responds to the praise: "It's a surprise, honor, and absolute thrill to have Rainbow and Tahereh's support on this series. To be honest, I'm giddy! They're such brilliant authors, and their writing is so achingly true and good. The kind of books that hurt, you love them so much. Their stamp of approval makes me feel like I've done something right."

About the book book (courtesy of Dutton Children's):

If Paris is the world's most romantic city, falling in love should be easy for hopeless romantic Isla and introspective cartoonist Josh. But as they begin their senior year at the School of America in Paris, life after high school creeps ever closer, and Isla and Josh are forced to deal with the challenges of every young-and-in-love couple must face, including the possibility of a future apart. Sure to please, Stephanie brings the stories of the leading ladies Anna and Lola, and their respective counterparts Etienne and Cricket, full circle.

Find out more at www.stephanieperkins.com.