Today I have author Cassandra Kemper here to do a guest blog for all of us. I met Cassandra on goodreads when she voted for my blog for Blog of the Month in a group there. We started talking and I found out she was an author and of a book that was on my tbr list. So I asked her if she would like to do a guest post on my blog and she was very enthusiastic about it. As was I. Here is a little more about Cassandra:

I go by Sandy, but I like to put my full name on my published works. :D It makes it feel official.

I am an indie fiction writer. I have been published a few times without pay, and I have won monetary prizes from a couple of writing-related contests. I have recently had my novella, "The Madder Hatter" self-published on Amazon/Kindle (it's free!), as well as its sequel, "The Madder Woman." :D

For more information about “The Madder Series,” go to the “Madder Series” page on my "Sandy's Write" tumblr. :D

Currently, I'm taking a break from the Madder series (yes, there will be more books) to delve into the world of superheroes and super villains. :D That's right, my next book is going to be a sci-fi origin story of a superhero, a super villain, and a poor girl caught in the middle of the chaos.

I'm still in the research phase, but so far I know that it is going to take place during the Great Depression (fun, fun ;D) and that one of my main characters will be a Chinese descendant.

Lev Grossman, author of The Magicians series and senior writer for Time, argues that “writers write [fanfiction] and put it up online just for the satisfaction…. The culture talks to them, and they talk back to the culture in its own language.”

As a writer of fanfiction—though I do profit from it now, thanks to stories in the public domain—I can say that there is quite a bit of truth in Grossman’s assessment. But if writers write fanfiction as a response to the culture, why do readers read it? Are they responding to a response? Probably. All that I can tell you for certain is the reason why I read fanfiction, which is to develop a deeper understanding of the characters, the setting, and/or the plotlines I am already familiar with. In other words, I just want more from the story that is provided, and fanfiction gives me that.

Grossman is correct when he claims that fanfiction is a way of communicating, but it’s not just between fanfiction writers and the culture; it is also between fanfiction writers and readers. A fanfic is like a debate between the writer and readers about what an original work could be, and readers either agree with the writer’s portrayal or they don’t. Ultimately though, like any good debate will do to a debater, a reader will come away from a fanfic with a better understanding of her perception on the original work. I do, anyway.

It does not matter if the story has a solid, conclusive ending; if I love it, I always want more from it. I want to explore alternate universes where the characters make different choices; I want to witness how the original plot could unfold if it has a different antagonist; I want to see what the story could be if all the romance is taken out of it, or if romance is added to it. All these possibilities…it continues my relationship with the story, helps me understand it better, and makes me love it all the more. And I highly doubt that I’m the only one who feels this way.

Look at Lewis Carroll’s Alice’s Adventures in Wonderland. That book’s ending is as conclusive as it can get, and not only did Carroll write a sequel to the book, but other people have based their movies, television series, and/or novels off of Carroll’s most famous work. And there are a lot of reasons for this, but one of the main ones must be that we, the consumers and the fans, cannot get enough of Alice’s Adventures in Wonderland. We want more—more Alice, more Wonderland, you name it and artists have shown you a different version of it.

Sherlock Holmes, The Wizard of Oz, the works of Shakespeare, even Star Trek—all of these stories and a lot of others have readers and viewers wanting more. This is what fanfiction provides. Whether you want more understanding of what a setting is like, who a character could be under different circumstances, or whether you just want to witness more of your favorite character’s existence, fanfiction provides it. This is why writers write it, and it is most certainly why readers read it. We simply want more.


I really enjoyed that. What a great post. I hope you all enjoyed it also. I was happy to have Cassandra here today and I hope she will come back in the future. If you want to find out about Cassandra, go to her goodreads author page: Click here 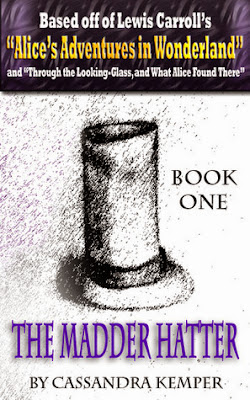