John Banville: 'Quirke Comes From the Damaged Recesses of My Irish Soul'

(from theguardian.com
by Hannah Ellis-Petersen) 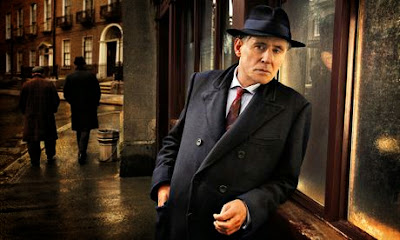 
There are two John Banvilles. The first, a Booker prize-winning novelist, is famed for his poetic and sensory fiction. The second, a crime fiction alter-ego by the name of Benjamin Black, is the one the author admires most.

"My Benjamin Black books are a triumph of nerve and spontaneity I hope," Banville said, "whereas Banville is moulding things away quietly down on the ground, in the darkness for years on end, hoping eventually to come up into some kind of light."

The Benjamin Black books, centred around the charismatic but troubled pathologist Quirke in 1950s Dublin, are now to be brought to life by BBC One. The highly anticipated adaptation, Quirke, will air on Sunday night and features the Irish actor Gabriel Byrne in the title role alongside Michael Gambon, with each episode taking their storyline from a different book in the series.

Banville, who won the Booker for The Sea in 2005, began writing his Quirke novels in 2004 after being inspired to adapt a screenplay he had written years earlier that never made it to the screen.

He said the Quirke books were rich with his childhood recollections of Ireland, far more than so his literary writing.

"I trawled through my memories of being a child when I was writing the books and I was astonished at how much I could remember.

"Quirke lives in the apartment in Dublin which I inherited from my aunt and he moves around in that area where I was when I first moved to Dublin. He's better off than we were in those days, but yes, it's soaked in my recollections. It is more connected to the circumstances of my life than my Banville books.

"As a child Dublin seemed like a magical world. Even still, the smell of diesel fumes still brings me back there. But looking back I realise what a narrow world it was, how poverty-stricken it was. It was a beautiful city, dingy and ramshackle with a melancholy beauty – most of which is gone now."

The hard-drinking, intolerant yet highly instinctive Quirke is a character Banville said had come from the "damaged recesses of my Irish soul. I sympathise with Quirke; he is a very damaged person, as many Irish people are from their upbringing.

"I wish he had more of a sense of humour, but it's quite hard to be humorous in crime fiction, I'm not sure why. My Spanish publisher said to me, I'm so in love with Quirke but couldn't you lighten him up just a little bit. And Gabriel [Byrne] brings a lot of darkness to the character."

While religion is notably absent from much of Banville's literary fiction, with his Quirke novels set in 1950s Ireland "when the church controlled our lives at every level", Banville admitted it was impossible to ignore.

The author himself conceded condemned the Catholic church as a cult, having abandoned his faith in his late teens.

"Back then it was driven by fear. When I was growing up as a Catholic, we were never told about the joys of religion. What we were told about was if that we didn't love God enough to displease ourselves, then God would condemn us to eternal damnation. It's a pretty potent message to give to a seven-year-old child and to keep banging it into us throughout our lives, so giving it up was quite a wrench. If you've been inculcated into a cult, and Irish Catholicism is a cult, then it is hard to break free from."

He continued: "When you're brainwashed like we were, you think this is normal, how things should be and Catholic upbringing is straightforward brainwashing. We were fed a lot of nonsense and a lot of lies under the guise of faith. Meanwhile the church is raking in money and abusing the people in its care. The priests and nuns were denied sexual love and amorous love which I think is appalling, it's a criminal thing to do to people.

"We knew that there was abuse and we knew it was bad, but we didn't know it was quite as bad as what was revealed, and we didn't know the criminal way in which the church protected the abusers, switching them from parish to parish to cover it up. Human beings have this amazing capacity to know but also not know at the same time."

Banville had little involvement in the TV adaptation – "the last thing they want is the author on set" – but had a brief meeting with the writers.

"I met Andrew Davies and we spent a very pleasant afternoon walking round Quirke's Dublin and went for a pint and he asked me some questions about Irish phrases – that was about it really."

As an author who famously deemed his literary novels "an embarrassment", Banville said he had a far less conflicted relationship with his Benjamin Black work.

"They are two completely different writers who have two completely different processes. I certainly like the Benjamin Black books more than my Banville novels because they are pieces of craft work and I like to think they are honestly made," he said. "My Banville books are attempts to be works of art but because perfection can never be achieved they always ultimately fail. So when I look at my Banville books all I see are the flaws, the faults, the failures, place where I should have kept going to make a sentence better."

He added: "When I publish a book and have to do readings, I do it with one eye closed or through my fingers because I know I'm going to find all kinds of horrors." 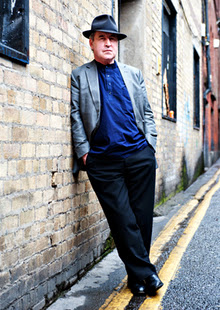