Writers Pen a 'Flash' Forward to the Past


Whether it's with the future version or the speedster in the present, writers Robert Venditti and Van Jensen are going full throttle with the Flash.

The future is now in a lot of ways for DC Comics — from the recent Futures End weekly series to September's line-wide "Five Years Later" event — but Venditti and Jensen were doing it before it was cool. They introduced a blue-tinged Flash from 20 years in the future in the writers' first issue, The Flash No. 30, and then continued it in Flash Annual No. 3 as he travels to the past to figure out what's wrong with the Speed Force.

Meanwhile, Barry Allen — in his regular crimson togs as the Flash of the present — is investigating who's broken into the Central City police department and is committing crimes with stolen weapons.

Drawn by Brett Booth, Flash No. 31 (out Wednesday) continues both mysteries while also showing the development of the relationship between Barry and Wally West, the recently reintroduced biracial version of the fan-favorite DC character who's not happy with the Flash for incarcerating his uncle Daniel. (He was running about as the supervillain Reverse-Flash, a little piece of info Wally doesn't know yet.)

In the future, though, Wally and Barry are very close — enough so that the Flash is emotionally wrecked when Wally is killed in a car accident in Flash No. 30, and he's intent on fixing the past so it doesn't happen.

"We're showing you almost in a lot of ways the ending, and the mystery is how everybody got to that point," Venditti says. "It's a different way to tell the story but also a very fun and challenging one."

DC fans have been clamoring for the return of Wally since the publisher's "New 52" relaunch three years ago, and Venditti expected a mixed reaction from people with a younger and different version of the character who had been the Flash himself for many years in the comics.

But neither of the writers wanted to tell the same story of Wally and Barry either, Venditti says. "That's a story that's already been told and collected in volumes of books that people can go and read on their shelves.

"We're very much trying to put our own spin on that but also stay true to the character traits and the core character qualities that make Wally always who he was and make his relationship with Barry what it was, as well."

That first iteration of their relationship had them growing as people by knowing one another, according to Jensen, and that's a major part of the relationship between them in the new Flash book.

"Barry is one of the few superheroes who is able to act not necessarily as a father figure but almost as a big brother," Jensen says. "And not only is he able to teach Wally things, but then Wally's continuing to teach Barry things."

The dynamic is not something seen a lot in comics, where often the adult-youth relationship is hero and sidekick a là Batman and Robin.

"Being a parent and having two kids myself, I can tell you that the child affects the adult just as much as the adult affects the child," Venditti says. "In some ways, they're role models for each other, and that's going to be a huge focus for Van's and my run on the book — not just in the first arc but past that, as well."

Jensen adds that he and his wife have a son on the way, and "it's very much where my thinking is. Those little very personal scenes of character interaction, they've taken on a different layer of meaning writing them, and in every way it's made the series better and richer than what we had already planned." 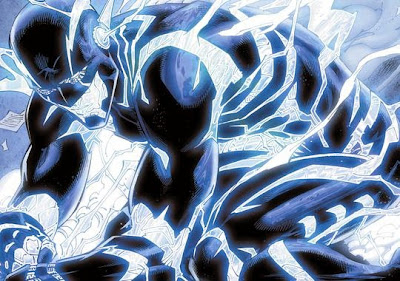 The future Flash continues his investigation into what's wrong with the Speed Force in "The Flash" No. 31.(Photo: Brett Booth/DC Comics)


Upcoming issues will also feature big reveals about the future Flash, according to Venditti, and it plays into the "Five Years Later" chapter in September.

"Basically there's something wrong with the Speed Force," he says. "Future Flash knows this, Flash of the present doesn't, and the story line is going to be about the limitations of Barry's power set and the effects it can have not just on him but on the world around him."

Future versions of Flash's Rogues such as Mirror Master and Trickster will also play big roles, and the writers will be exploring the same ideas as with the future Flash — Barry said he would never kill yet in the annual, readers watched him kill Gorilla Grodd 20 years later.

In their stories of the present and the future, Venditti and Jensen are exploring how time and incidents can change people and have a huge impact on shaping who they are. For example, Wally is where Barry could have been if not for Detective Frye taking him under his wing following the murder of his mother and the subsequent incarceration of his father.

"Now Wally represents an opportunity for Barry to do the same, which is exactly what Barry would do being the kind of guy he is: He's always wanting to help and do what he can for others," Venditti says.

And in issue 31, a major Rogue gets into a situation where he's doing the same bad-guy stuff he's always done, yet when Flash isn't there to save the day, there are severe and unforeseen repercussions.

"That's true of anyone in any walk of life," Venditti says. "The border that separates someone who's a success with someone who is down on their life or in jail, there's not that big of a difference between those people, and if circumstances play out a little differently, you could easily be one or the other." 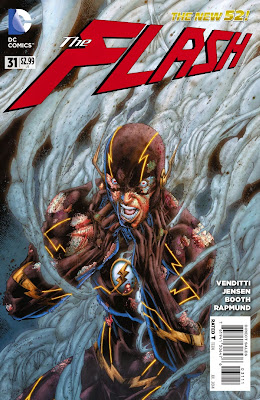