21 Modern Mysteries You Won't Be Able to Put Down

(from buzzsugar.com
by Tara Block) 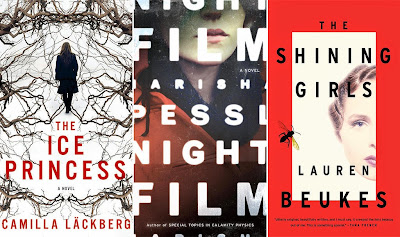 It all began with an early obsession with Nancy Drew, then I moved on to Sherlock Holmes and Agatha Christie, and before I knew it I was devouring any book that promised thrills, intrigue, and murder. Is there a detective in it? I'll read it. Bonus points if the protagonist is a woman. And the cherry on top is if the author is British or Scandinavian (or Irish). That said, Gone Girl is one of my favorite books of all time, so if you feel the same, you'll probably love my other picks. Obviously, this isn't an exhaustive list — I've only included books I can vouch for (aka that I've read) — but here are 21 modern mysteries guaranteed to keep you up all night, in order of tame to terrifying.

The book: The Expats by Chris Pavone

The hook: A suspense thriller that keeps you guessing about the characters' true identities, motives, and loyalties. The chapters go back and forth between the past and the present, culminating in the end.

Fear factor: You may be at the edge of your seat trying to put this puzzle together, but you won't be scared.

The book: Claire Dewitt and the Bohemian Highway by Sara Gran (No. 2 in the Claire DeWitt series)

The hook: A San Francisco-set new-age noir murder mystery with a sharp, highly flawed female detective as the lead.

Fear factor: It's a murder mystery with some mystical elements but not frightening in the least.

The book: The Sweetness at the Bottom of the Pie by Alan Bradley (No. 1 in the Flavia de Luce series)

The hook: A precocious, chemistry-obsessed 11-year-old girl attempts to solve a murder in this charming mystery set in the English countryside.

Fear factor: It's a very light, humor-filled murder mystery. No need to hide under the covers for this one.

The book: The Vanishers by Heidi Julavits

The hook: A woman haunted by a mother she never knew must deal with an altercation with her mentor that takes her down a rabbit hole into her past and her future.

The book: Déjà Dead by Kathy Reichs (No. 1 in the Temperance Brennan series)

The hook: This is the first in an ongoing series of books (No. 17 just came out this year) starring forensic anthropologist Temperance "Bones" Brennan as she solves murders alongside a cop love interest mostly in either Montreal, Canada, or Charlotte,NC. It also inspired the TV show Bones, although the characters and plots differ.

Fear factor: There are always some nail-biting scenes in which Temperance's life is in danger or she's trying to save someone in the nick of time, but it's more thrilling than scary.

The book: The Cuckoo's Calling by J. K. Rowling under the alias Robert Galbraith (No. 1 in the Cormoran Strike series)

The hook: A supermodel's suicide might not be what it seems when her brother hires an ex-military private investigator to uncover what really happened, digging up family secrets along the way.

Fear factor: Harkens to the good ol' days of detective stories, with likeable, rough-around-the-edges main characters and a plot that keeps you guessing. Big on mystery, light on the scary.

The book: Joyland by Stephen King

The hook: Set at a beachside carnival in the '70s, this supernatural mystery is a nod to the kind of ghost stories you told around the campfire.

Fear factor: This ghost story is about as scary as the haunted mansion ride, and just as nostalgic.

The hook: Graphically abhorrent monsters, dark history, and murder make this time-traveling story about a boy who discovers his late grandpa's secret past anything but kid friendly.

Fear factor: What really makes this book chilling is the vintage photos interspersed throughout, which the author used as inspiration for the story.

The hook: I never like to give away too much with this one, because the more ignorant you go into it, the better. I will say that this is the story of a toxic marriage, deceit, and manipulation. I've never read anything like it before or since.

Fear factor: Besides being terror-stricken with the idea that all relationships are f*cked up under the surface, this story has some geniunely icky moments that may give you goosebumps.

The book: The Ice Princess by Camilla Läckberg (No. 1 in the Fjällbacka series)

The hook: This Swedish crime drama series is chillingly sinister and superbly written, and it kicks off with an engrossing story about the suspicious suicide of a beautiful young woman found frozen in a bathtub.

Fear factor: It's a dark murder mystery, sure, but considering the series only gets darker as it goes on, I'd say this one won't have you spooked.

The book: The Likeness by Tana French (No. 2 in the Dublin Murder Squad series)

The hook: The concept of this series is unique in that Tana French takes a minor character from the previous novel (all of whom are detectives at the same Dublin squad) and makes them the protagonist of the next. In this follow-up to In The Woods, a female detective is called to a murder scene where the victim looks exactly like her and carried an ID with the name she used as an undercover detective years before.

Fear factor: Reading the premise alone sent tingles down my spine, and it keeps you mystified until the bitter end. However, the bulk of the story isn't as unnerving as the rest of the series.

The book: Faithful Place by Tana French (No. 3 in the Dublin Murder Squad series)

The hook: All the books in this series have a way of burrowing into your psyche and lingering with you for days or weeks after you finish them, but this one especially so. Alternating between the past and the present, this story follows a detective who never recovered from being dumped by his first love on the day they were supposed to run away together. Then his entire world is turned upside down when her suitcase is found 22 years later in their meeting spot.

Fear factor: This is one of those psychological mysteries that messes with your head more than anything.

The book: The Stonecutter by Camilla Läckberg (No. 3 in the Fjällbacka series)

The hook: If you've read The Girl With the Dragon Tattoo, you know that those Scandinavians have some sort of dark magic when it comes to creating crime thrillers, and this is no exception. All the books in this series incorporate chapters that give you insight into some unknown, usually sinister character, and in this one you get a historical story alternating with the modern-day investigation of a murdered little girl found in the water.

Fear factor: Whenever kids are involved, you can bet the story is going to be both sad and disturbing, and this book has a creepy edge to it.

The hook: A journalist faces her own dark past and family secrets when she goes back to her hometown to investigate the grisly murders of two preteen girls.

Fear factor: Not gonna lie, just thinking about this book again gives me the heebie-jeebies. Not to say too much, but there are some straight-up nauseating moments. Definitely not a feel-good story.

The book: The Preacher by Camilla Läckberg (No. 2 in the Fjällbacka series)

The hook: The remains of two young women who had disappeared 20 years ago are found next to a new victim in this thrilling story of family secrets and religious fanatics. It alternates between the present investigation and the perspective of the murdered girls, including their final moments.

Fear factor: It's one thing to follow a crime from the safety of the detective's perspective, it's another to be put in the shoes of the murder victims when you know their macabre fate.

The book: In the Woods by Tana French (No. 1 in the Dublin Murder Squad series)

The hook: Three children go missing, but only one is found — a boy with blood-filled sneakers who lost his memory of what happened in his state of shock. That boy is now a detective who must return to his hometown to investigate a murder with similarities to his own unsolved mystery.

Fear factor: Children being murdered in the woods is a recipe for an eerie piece of literature, and this one will raise the hairs on the back of your neck.

The hook: The sole survivor of her family's mass murder in their home, a little girl is now a fully grown train wreck who begins to doubt her young testimony that her brother was the killer. The narrative jumps back and forth in time, taking us through the day of the tragedy from the perspective of all the characters involved.

Fear factor: Life (or death) sucks for pretty much all the characters in this story, so it can be just as depressingly sad as it is terrifying.

The book: The Girl With the Dragon Tattoo by Stieg Larsson (No. 1 in the Millennium Trilogy)

The hook: Just as dark and chilling as the icy Swedish setting it takes place in, this thriller follows a disgraced journalist who sets out to solve a decades-old case of a missing girl alongside an unconventially badass computer hacker.

Fear factor: The graphic rape scenes, violence against women, and ominous villains are enough to turn your stomach. But as disturbing as it is, you really can't put it down.

The book: Broken Harbor by Tana French (No. 4 in the Dublin Murder Squad series)

The hook: A detective with his own murky past finds himself attempting to solve a twisted murder of two small children and their father — along with the attempted murder of the mother — who were all found dead in their home. Adding to the mystery of the crime is the numerous holes smashed in the walls, the baby moniters scattered throughout the house, and the menacing animal trap in the attic.

Fear factor: Nothing like a home break-in with a multiple homicide to have you hiding under your bed. You'll be double- and then triple-checking your door locks while reading this psychological thriller.

The book: The Shining Girls by Lauren Beukes

The hook: This sci-fi mystery puts you in the shoes of two main characters as it alternates chapters: a ruthless, repulsive time-traveling murderer and the one victim who got away and is now hunting him. There are mystical elements to this story, but it's mainly a thrilling and gruesome crime novel.

Fear factor: This is probably the most gory of the bunch, and there's a major ick factor as you're forced to read the chapters from the killer's point of view. It's a frightening read with some nail-biting moments.

The hook: The daughter of a reclusive, enigmatic filmmaker known for pushing boundaries with his horror films is found dead under mysterious circumstances, and a journalist becomes obsessed with finding the truth. This haunting story also creatively incorporates fake news clippings, Wikipedia entries, and other media throughout. It's petrifying, inventive, and deeping engrossing.

Fear factor: Let's just say you might not be able to sleep at night. While lot of the horror of the novel is more in your head — à la an Alfred Hitchcock film — it's straight-up blood-curdling at times.


Blogger's note: I want to read them all! I have heard of a lot of them. I read "Joyland" and loved it it should be on this list. I think I am going to get "Gone Girl" because of the fact the author of this article did not want to reveal anything. That got my interest going. Plus I know they are making a movie so I think I will start there. Do you think any other books deserve to be on this list? Let me know!
Posted by Mollydee55 at 5:08 PM