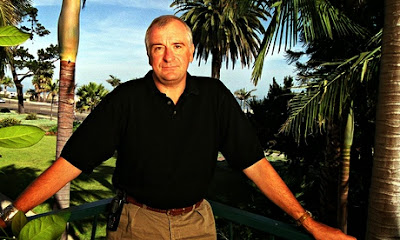 
Extracts from an abandoned draft of a Hitchhiker's Guide novel by Douglas Adams are set to be included in a new biography of the late author after they were discovered amongst the papers in his Cambridge archive.

Adams died in 2001, aged 49, leaving behind him seven much-loved novels and three co-authored works of non-fiction. The Salmon of Doubt, published posthumously in 2002, was a collection of fragments and part of an unfinished novel culled from his hard drive, but his new biographer JL Roberts, who was given full and exclusive access by Adams' family to his papers, found a treasure trove of unsuspected work within the boxes and boxes of material housed in St John's College.

A selection is set to be included in his forthcoming biography of Adams, The Frood, from cut extracts from the first Hitchhiker's Guide novel, The Dentrassi and Arthur's Reverie, to extracts from the "lost" draft of Life The Universe and Everything, including one on "Inter-Species Sex".

"The Salmon of Doubt was taken from the hard drive of all Douglas's many different Apple Macs," Roberts said. "Nobody had ever thought about a paper trail though. Douglas Adams was the king of new technology, and people probably thought he'd had a huge bonfire of all his papers. But there are boxes and boxes of notebooks, lots of typescript stuff, paper printed from the computer … it was just an enormous job."

There is "an enormous amount of material out there that has never been seen before", said Roberts. As well as Life, the Universe and Everything, the biography will feature an alternative original pitch for Hitchhiker, a lost rough script for the second television series, and further scraps of unused material, with names like Baggy the Runch and The Assumption of Saint Zalabad.

The Life, the Universe and Everything draft, Roberts said, has "whole chapters where the characters are doing different things – different ideas he never got round to using, [such as] chapters written from Arthur Dent's point of view".

But "none of this stuff is finished", he added. "It's very important to contextualise this material properly … and I understand people thinking that this is raw material and he didn't want it to be seen. I spend part of the book asking what Douglas would have wanted … but there are so many great Douglas Adams jokes which have been completely air-sealed for the last 20 years. [And] I think it's wonderful that we finally get to read some of this stuff."

The book is authorised by the Adams estate and Douglas Adams' family, including his daughter Polly and his sister Susan. Although there have been previous biographies of Adams, including Nick Adams' Wish You Were Here, and Neil Gaiman's Don't Panic, The Frood takes an "all-new" approach, said publisher Preface, part of Random House.

"It would be ridiculous to pretend that Douglas Adams' life and work has gone unexamined since his dismayingly early death at 49, but throughout the decade since the last book to tackle the subject, the universes Adams created have continued to develop, to beguile and expand minds, and will undoubtedly do so for generations to come," said the publisher, announcing publication of The Frood in October.

The book will, said Preface, tell the story "of Adams's explosive but agonisingly-constructed fictional universe, from his initial inspirations to the posthumous sequel(s) and adaptations", with Roberts interviewing friends and colleagues "for a fresh take on the man and his works".

The title is a word of Adams' own invention, meaning an amazingly together guy. In his own words: "Hey, you sass that hoopy Ford Prefect? There's a frood who really knows where his towel is."

The news about the release of unseen material comes shortly after Hitchhiker fans around the world celebrated Towel Day - the annual phenomenon on 25 May marking the day fans gather for Adams' wake. Adams' fans know that a towel is "about the most massively useful thing an interstellar hitchhiker can have", and proved it earlier this week by taking part in a series of towel-bearing escapades.

As Adams put it: "any man who can hitch the length and breadth of the galaxy, rough it, slum it, struggle against terrible odds, win through, and still knows where his towel is is clearly a man to be reckoned with."