When the Water’s Too Cold, Something Else to Dive Into 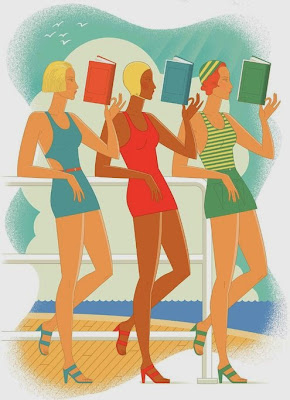 The shredder ate your A.T.M. card. You hear sirens because you butt-dialed 911. Your kid blew up canned cherries in the all-white kitchen because she’s an aspiring filmmaker, and Steven Spielberg once did it — his mother got to like the bloodstained look. You finally bagged the neighborhood pest in a Havahart trap, and it’s the cutest, fluffiest thing, but you never want to hear the deranged hiss of an angry raccoon again.

Yet throughout all this, you haven’t looked up from what you’re reading. Why not? Because we have entered the fun season with the sandy nickname, the one known for books impossible to put down. (For novelty’s sake, no words rhyming with reach, teach or bleach will be used in the text of this review.) Whatever your taste, the publishing world has an offering for you, whether it’s sci-fi populated by talking bees (Laline Paull’s “The Bees”) or the would-be Proustian Norwegian literary event of the season, “My Struggle,” by Karl Ove Knausgaard. (Volume 3 comes out next week.) For those playing catch-up, Michael Lewis’s “Flash Boys” is the most urgent nonfiction horror story of the year.

As for this summer’s brand-new reading, if there’s one overriding motif, it’s this: the crazier, the better. The most curious work of gossip is William Stadiem’s “Jet Set,” a jumble of aeronautics history, high times from the 1950s and ‘60s, incredibly versatile name-dropping (from Mrs. John Jacob Astor to Christine Keeler of the Profumo scandal) and Sinatra’s “Come Fly With Me” as a kind of theme song. If, by hook or by crook, it can be connected to the glamorous days of air travel, it’s shoehorned in here.

The most curious international hit to land here, with a blurb invoking Stieg Larsson, is “The Truth About the Harry Quebert Affair.” Written by Joel Dicker, who is Swiss but spent childhood summers in Maine, it is weirdly tone-deaf about American life. The narrator has written only one novel, but it is such a hit that he shows up on red carpets, has a V.I.P. box in Madison Square Garden and gets “the right to make every man in New York jealous by dating Lydia Gloor, the star of the country’s top-rated TV show.”

Then there’s Terry Hayes’s “I Am Pilgrim,” a first novel of dubious literary provenance, since Mr. Hayes’s earlier writing credits include a couple of musty “Mad Max” movies. (These are not remembered for their dialogue.) From a distance, “I Am Pilgrim” looks like a movie treatment or another lurid, violent thriller with a case of A.D.D. It begins with a grisly New York crime scene in which the victim’s six-inch heels lead the main character, a forensics wizard, into a morbidly erotic daydream about exactly how she died. It is so much in keeping with current pop cultural clichés that it leaves him thinking, “Sex today sure isn’t for sissies.”

Sold? Maybe. Mr. Hayes is cashing in on exploitation but laughing at it, too. By the end of the next paragraph, he takes aim at the type of young women “who mistake People magazine for news and a Japanese symbol on their backs as a sign of rebellion.” Then he leads the action to the basement of the building in which the woman was killed, has a plumber find a seven-digit number in a pipe and has Pilgrim — our forensics guy, and the hero of a great big projected trilogy — peg it as a Turkish area code, just like that.

By Page 50, this book has involved Detroit, Dubai, Red Square, the Black Hills of South Dakota, Santorini, Greenwich and a Nazi concentration camp; its plot has touched on the martial art Krav Maga and a secret code disguised as Shania Twain music. Mr. Hayes’s globe-trotting book has more kicks, twists and winks than anything of its dusty genre has provided in a long time. You will be happily surprised to find a new thriller franchise with brains to match its brawn.

As a stellar new author, Mr. Hayes can’t rival the man behind “The Closer,” a warmhearted, charmingly frank baseball memoir. But Mariano Rivera, telling his story with Wayne Coffey, knows the value of understatement. At the start of this book, it is 1990, and Mariano has grown to the age of 20 in a sleepy Panamanian fishing village when a contract-toting man from the New York Yankees arrives, offering $2,000. For that, Mariano figures, he can buy shoes without holes and play a little baseball before settling into his chosen career, that of a mechanic. Babe Ruth? Hank Aaron? He’s never heard of ‘em. 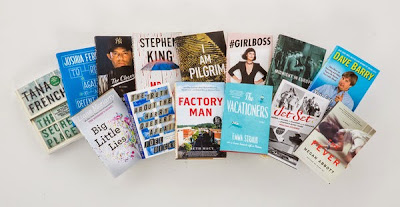 
“The Closer” describes such a devout, decent and admirable guy that “Happy Father’s Day” might as well be its subtitle. It’s as inspiring as it is exciting, and a tonic next to this summer’s more risqué success stories. Compare (because no one ever will elsewhere) Mr. Rivera’s uphill journey with that of Sophia Amoruso, the author of “#Girlboss,” a book of advice for the budding young female chief executive. Never mind that the clothing empire Ms. Amoruso presides over is called Nasty Gal, and that it sells items like the Nasty Gal Uh Huh Honey Skirt ($52); never mind that her book describes Dumpster diving and shoplifting as early phases of her career. The fact is that in 2006 she started an eBay shop selling vintage clothing, and she now calls herself the head of a $100-million-plus business, dishing out maxims like “Money looks better in the bank than on your feet.”

As a book meant to amuse and instruct young women, “#Girlboss” certainly has the edge on most of what passes for advice right now. Ms. Amoruso actually sounds interested in the success of persons other than herself. But if you were on that clichéd desert island and could follow only one sage’s advice, it would have to be Dave Barry’s. When Mr. Barry stops delivering books funny enough to annoy the traveler sitting next to you, let’s stop dropping his name.

That’s not to say that his latest, “You Can Date Boys When You’re Forty,” is uniformly funny. There are a few pieces you might skip; his “Fifty Shades of Grey” parody isn’t as drop-dead as his recent takeoff on the “Twilight” series. But his “Air Travelers’ F.A.Q.” is guaranteed to disturb other passengers.

And in a chapter called “How to Become a Professional Author,” he warns that there is no easy way to achieve literary success. “No, you must roll up your sleeves, plant yourself in front of your computer and perform the difficult — and lonely — task of writing a letter to a successful author asking for free advice.” Should such letters go unanswered for more than two weeks, it’s wise to begin stalking those famous authors, be they living (James Patterson) or dead (Jane Austen). Speaking of Austen, he believes that if she were alive to read the “Fifty Shades of Grey” books, she would die all over again.

Mr. Barry’s fans know who they are, and his book’s fate is an absolutely sure thing. So is that of “Mr. Mercedes,” the latest from Stephen King. Mr. King happens to be such a dependably strong storyteller that readers know exactly what to expect from him, except on those unmistakable occasions when, as with the breadth and ambition of “Under the Dome,” he breaks the mold. This time, he’s in reliably fine form with a taut, suspenseful race-against-time book about a retired cop who is pitted against a Mercedes-driving thrill killer. Since Mr. King delivers such cafeteria-style abundance and variety, a very different kind of King novel, “Revival,” is only six months down the road.

Two more sure things: anything by Alan Furst, who has yet to write an unalluring spy novel and whose latest, “Midnight in Europe,” has the novelty of beginning in New York in 1937. “You could do what you liked, nobody cared,” he writes of an Irish bar in Murray Hill, because there’s not a place in the world Mr. Furst can’t make sound louche. Even his version of Christmas shopping at Saks Fifth Avenue sounds ominous and erotically charged. And anything by Liane Moriarty, if just circumstantially. Ms. Moriarty’s “Big Little Lies” (not due out till July 29) comes after “The Husband’s Secret,” which was so popular that a follow-up with blank pages could rack up brisk sales.

“Big Little Lies” infuses a school community in Australia with a sinister aura, but the book to beat in that plot realm is “The Fever,” by Megan Abbott, a hot new entrant in the “Is it the next ‘Gone Girl’?” sweepstakes. The actual Gillian Flynn, who wrote “Gone Girl” and will keep selling copies of it until something better comes along, has expressed admiration for Ms. Abbott’s haunted high school kids and the shivers they send. What has gotten into the girls in this book, sending them into seizures? Something occult? Chemical? Erotic? Psychosomatic? Ms. Abbott plants a strange phosphorescent lake in the region, attaches frightening symptoms to the girls’ attacks and then keeps her readers scared and guessing. She’s an adroit Edgar winner who knows how to play tricks.

Two of the summer’s most entertaining novels come from previously well-praised but underwhelming sources. Anyone who failed to appreciate Joshua Ferris’s “Then We Came to the End” and “The Unnamed” should be that much more delighted by the astringent wit of “To Rise Again at a Decent Hour,” his caustic book with a deadpan dentist for a narrator and a surprising spiritual bent that struggles forth from the man’s deadpan cynicism.

And the Emma Straub of “Laura Lamont’s Life in Pictures,” a benign but mannered Hollywood period piece, is nowhere to be found in “The Vacationers,” a scrappy portrait of a family bringing its Upper West Side troubles to Mallorca for repair. The 20-year-old heroine is keenly observant enough to think that Cary Grant in “Charade” reminds her of her father: “high-waisted pants and a way of talking that was both flirtatious and belittling at the same time.”

Another big surprise: “Factory Man,” the first book by Beth Macy, who has found a terrifically rich subject for her investigative reporting. Ms. Macy zeroed in on a family-run Virginia furniture company that was being put out of business by cheap Chinese knockoffs, and happened to find an owner determined to fight back. Ms. Macy got to know the factory town, its workers, the facts behind offshoring and the tactics that might keep it at bay. Early warning: “Factory Man” (coming July 15) is an illuminating, deeply patriotic David vs. Goliath book. They give out awards for this kind of thing.

And finally, here’s a sure way to tell when the summer reading season is ending. The last hurrah will arrive on Sept. 2. It’s “The Secret Place,” by Tana French, and there are some things we bet on. Leaves will change color. And Ms. French’s next one will be good.

Plots (and More) to Pore Over

YOU CAN DATE BOYS WHEN YOU’RE FORTY: DAVE BARRY ON PARENTING AND OTHER TOPICS HE KNOWS VERY LITTLE ABOUT, by Dave Barry. 224 pages. G. P. Putnam’s Sons. $26.95.

JET SET: THE PEOPLE, THE PLANES, THE GLAMOUR, AND THE ROMANCE IN AVIATION’S GLORY YEARS, by William Stadiem. 368 pages. Ballantine Books. $28.

THE CLOSER, by Mariano Rivera with Wayne Coffey. 280 pages. Little, Brown and Company. $28.