The Joys of Judging a Book by Its Cover

A woman’s melancholic eyes, heavy-lidded with desire, float in the nocturnal sky over a brashly lit skyline and amusement park.

Stark rays shoot down from the heavens, illuminating a solitary house on a bare hill.

A face, its features only half-realized, emerges with eerie, mournful anger out of gruff black brush strokes.

Book jackets. They aren’t the main feature of the exhibition “Gatsby to Garp: Modern Masterpieces from the Carter Burden Collection,” which opened this week at the Morgan Library & Museum. But amid a display of nearly 100 items, including first editions, galley proofs, manuscripts and letters, they attract your eyes immediately. Which is just what they were meant to do.

This exhibition embraces a period of American literature that extends not just from Gatsby to Garp but from James (Henry) to Morrison (Toni). It was a period when American literature was encountering the American century, and when reading — for brows high, middle and low — had not yet been altered by glowing screens. Jackets were the way books announced their significance in the modern bookstore — an institution that had this single century of hearty life. 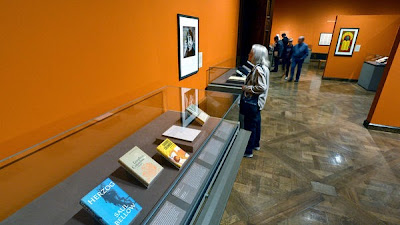 Galleys, first editions and photographs amassed by Carter Burden from 1973 to 1996. Credit Philip Greenberg for The New York Times


So this could be thought of as the jackets’ golden age, and those I mention will be instantly recognizable, if you have spent too much time in secondhand shops: Francis Cugat’s treatment of Fitzgerald’s “The Great Gatsby” (1925); Arthur Hawkins Jr.’s vision for Faulkner’s “Light in August” (1932); and Mel Williamson’s evocation of Saul Bellow’s “Herzog” (1964).

But the show’s curator, Carolyn Vega, also makes sure that we see the connection with what lies between the covers. We learn that one draft of Paul Bacon’s jacket design for Joseph Heller’s “Catch-22” once had, in place of its antic dancing figure, “a single hand with its middle finger raised.” Fitzgerald was still working on Gatsby when he saw an early draft of this jacket design with its nocturnal eyes; he told the publisher he had “written it into the novel,” perhaps as the inspiration for the gigantic disembodied eyes of Dr. T. J. Eckleburg peer from a billboard.

Nearly every object here is illuminated in similar ways, by revealing something about its origins, reputation or influence. This is usually one of the difficulties in literary exhibitions: It is impossible to offer the actual substance of the books, so the curator must make something of their presence, use them to illuminate one another, show why they are gathered in one place. In this case, that may have been a bit easier because, in one respect, they reflect a single sensibility: They were originally purchased by Carter Burden, who died in 1996 at the age of 54 but had already (as the exhibition points out) “assembled the greatest collection of modern American literature in private hands.”

Burden began collecting in 1973, acquiring a Paris edition of Henry Miller’s “Tropic of Cancer” (1934) — a book Burden wrote about in his senior thesis at Harvard. He went on to buy what he called “every aspect and manifestation” of more than 3,000 authors. A great portion of that collection was donated to the Morgan by his family, including “scarce editions of canonical works” like Ezra Pound’s cantos and first editions of James, Faulkner and Hemingway. Some of his intensity, even his mania, can be sensed in this selection, which includes reviewers’ galleys, publicity material and inscriptions. (A selection of authorial portraits by Irving Penn fills out the show.)

What we don’t learn at the Morgan is the full scope of Burden’s energy, which is worth a novel itself. As Burden’s obituary in The New York Times tells us, his father was a great-great-grandson of the railroad magnate Cornelius W. Vanderbilt, and his mother was a niece of the actor Douglas Fairbanks. After he married the equally well-connected Amanda Jay Mortimer, the couple gave spectacular parties in New York in the 1960s, before he settled into a life of extraordinary philanthropy, serving for nearly a decade on the City Council and owning, for a time, both The Village Voice and New York magazine. (He and his wife divorced in 1972, and Amanda M. Burden, as she is known, went on to serve as director of the New York City Planning Department in the Bloomberg administration.)

The size of this collection allowed Ms. Vega to put together a century-long survey that she has divided into historical movements, including “The Lost Generation” (represented by Fitzgerald, Hemingway, Dos Passos and Miller), “Inventions in Modernism” (Pound, William Carlos Williams and Robert Frost), “The Harlem Renaissance” (Langston Hughes and Zora Neale Hurston), “American Spaces” (Faulkner, Sherwood Anderson, Willa Cather, John Steinbeck) and other categories.

Burden’s first-edition copies of James’s “The Golden Bowl” (1904) and Wharton’s “The House of Mirth” (1905), for example, provide an occasion for us to see how James encouraged Wharton when she declared her interest in writing about New York society. “Let yourself go in & at it — it’s an untouched field, really,” he wrote.

Another writer is more explicitly generous here; reviewing Philip Roth’s “Goodbye, Columbus” (1959) — shown in both British and American first printings — Bellow wrote that, “unlike those of us who come howling into the world, blind and bare, Mr. Roth appears with nails, hair, teeth, speaking coherently. He is skilled, witty, energetic and performs like a virtuoso.”

And there are glimpses of the work behind the books. Faulkner claimed he wrote “As I Lay Dying” in two months during “quiet hours on the job at the local power plant.” Steinbeck’s 1919 high school yearbook is here; he was its associate editor. Raymond Chandler, represented by an “advance review copy” of “The Big Sleep”(1939), began his writing career “after he was fired for drunkenness and absenteeism from the Dabney Oil Syndicate in 1932”; he wandered “up and down the Pacific Coast” and began reading cheap pulp magazines.

But what would any literary exhibition be without a few jabs at critics? In reviewing Jack Kerouac’s “Maggie Cassidy” (1959), John Ciardi, the poetry editor of Saturday Review, said the author was “basically a high school athlete who went from Lowell, Mass., to Skid Row, losing his eraser en route.” In a letter, Allen Ginsberg rose to his friend’s defense: “New Art should not arouse hostility among the learned, but does, and alas always has.”

And it is possible to imagine Burden’s grin when he bought an advance review copy of “A Farewell to Arms” (1929) that had already passed through the hands of other collectors, one of whom received Hemingway’s inscription: “What is the writer of a book expected to write in a review copy of that book, sold by a reviewer and purchased by a collector — except to hope they all have their moneys worth and are happy.”
Posted by Mollydee55 at 9:05 AM