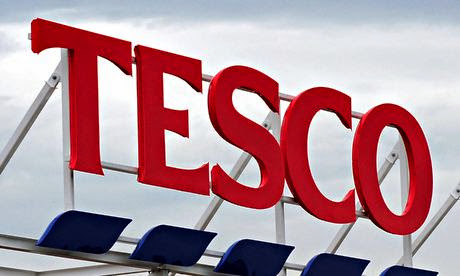 If you tolerate this, then your children won't be next … a Tesco sign. Photograph: Rui Vieira/PA


So far in my four decades, I have lived a life blissfully free of controversy. No paparazzi have ever staked out my front door and, with the odd (in both senses of the word) outraged commenter aside, I have never, to my knowledge, sparked loathing and fury in anyone I either know or don't. So it was with an ease prompted in equal measures by naivete and common sense that when Tom Hodgkinson of the Idler Academy emailed me several months ago to ask whether I would like to be a judge for this year's Bad Grammar award, I agreed with not the slightest bit of hesitancy.

Well! Who knew that an interest in how the English language works was tantamount to announcing oneself as a frothing-mouthed raving loony? Are sentence structures the new poll tax? I could only assume so from the frankly hilarious rage that greeted the announcement of our shortlist this week. I feared I had failed in my capacity as a judge already when my presence on the panel did not prevent the prize from being raged against on the website I write for, when one especially outraged chap wrote that I and my fellow judges, Jeremy Paxman and Rowley Leigh, were "peddling sneering, condescending, dismissive, misanthropic, elitist, made-up twaddle"? He suggested that our rackety prize was some kind of undefined Gove-ian conspiracy and, perhaps mistaking our prize for actual legislation, that we were "language police". I could spend longer dismantling this particular blog but, first, life's too short and, second, seeing as the gentleman's main objection seemed to be that the prize was inspired by a book (that I had heretofore never encountered) called Gwynne's Grammar, and he himself has written a competing grammar book, I'm not convinced there's really any need.

Even lovely Michael Rosen seemed to feel the bile rising at the prospect of these awards, calling them "nasty" and insisting that bad grammar is "no big deal. We all make mistakes. In most circumstances it's no big deal. We get what the person meant from the context."

Indeed we do. This, it seems, lies at the heart of this issue: should grammar be prescriptive or descriptive? In other words, should we all adhere to a set of hard rules from the 16th century or should we just blunder along, let language take its course and assume we know what each other means? Obviously, the answer lies between those two extremes. But I am going to speak up here in defence of good grammar and, contrary to the suggestion of one columnist, my defence is in no way endorsed or inspired by Michael Gove.

One doesn't need to be Thomas Gradgrind to be interested in the rules underlying the English language, or to believe that good communication and understanding depend on clarity. Grammar is not just about learning sentence construction: it's about speaking clearly and plainly and cutting through obfustication. But even aside from that, and most importantly of all, good grammar will help you get laid.

I learned grammar at my school in the US and I am eternally grateful I did because, when I moved to London in the early 90s at the age of 11, I learned that grammar was not, weirdly, on the syllabus. As a result, I found learning foreign languages, such as French and Italian, far easier than some of my new English friends did because I understood the subjunctive tense and verb conjugations. Only one other girl in my year had also had grammar lessons and she, too, found learning foreign languages a comparative doddle. When we were about 16, a bunch of my friends, including my grammatically-correct friend, all went off on a German exchange and my friend, with her superior grammar skills, pulled not one, not two, but THREE German boys. I'm telling you, Munich has yet to recover from her visit, and grammar lessons were never so popular as when the German exchange trip returned to London.

As for my second piece of evidence for the defence, as anyone who has ever dabbled in internet dating knows, there is no bigger turn-off – none – than a spelling or grammar mistake in a prospective suitor's biography or correspondence. Yes, everyone makes mistakes and language mutates and blah blah blah, but in the pitiless world of internet dating, it is simple human instinct to rule someone out on such grounds. I've had friends cancel dates due to a simple rogue apostrophe. So consider that, grammar descriptivists. The perpetuation of the human race depends on good grammar.

So when the award rolled around on Thursday night, we all felt the heavy weight of the human species on our shoulders. Our shortlist was pleasingly outraging and the Idler Academy was veritably packed out with passionate fellow grammarians. There were some delightful entries (I particularly like the cafe chain Apostrophe misusing an apostrophe, although that is, strictly speaking, more a punctuation mistake than a grammatical one) and some downright depressing ones. Rowley Leigh voted for Tristram Hunt's incomprehensible speech, but Jeremy Paxman and I both voted for Tesco, so it took the prize. Tesco, it may be remembered, was nominated for using "less" not "fewer" in reference to numbers on loo-roll packaging – "Same Luxury. Less Lorries" – and for describing its orange juice as "most tastiest". I suspect this will come as a disappointment to those who predicted that our Gove-ian prize would go to Hunt (he was runner-up) but that's the problem with dismissing basic grammar rules: you don't always talk sense.
Posted by Mollydee55 at 2:56 PM