Sometimes we must revisit the past to embrace our future.

Twenty-four years ago, the murder of a Chicago police officer changed Joey DeLuca’s life. He lost his best friend and first love, Meghan McConnell, when her mother whisked her out of town. Now, on the eve of another officer’s death, Meghan is back and about to step into his life again.

There is very little gray in Joey's line of work as a Lt. Detective--it is either black or white, right or wrong. But Meghan’s insistence on finding answers to her father's murder threatens those beliefs and throws his marriage to CPD Detective Andi, his career, and the entire DeLuca family in jeopardy when new revelations come to light.

Can Joey save his marriage, solve the murder, and keep his family together all at the same time?

The third book in the DeLuca Family Series, TRUE blue can also be enjoyed as a stand-alone novel.

Lieutenant Detective Joseph Anthony DeLuca Jr. of the Chicago Police Department knelt beside the victim and lifted the edge of the plastic sheet to expose the bloodied head and lifeless torso. His gut clenched. This never got easier, but this guy was a cop, a detective under his own watch, and that fact irked him even more.

“How the hell did this happen?” he asked Sergeant Davis, the slain detective’s immediate supervisor.

Oh, yes, he’d gotten the quick initial briefing when he’d arrived on scene. A convenience store robbery in progress. Shots fired. Officers responding, but before backup could arrive, more shots fired, and then a car screaming down the street and Detective Mark Beattie, pursuing on foot, struck down, his body flying through the air on impact, his head smashing against the pavement when he landed.

“Why was he here in the first place?” Lieutenant DeLuca added, ignoring the sweat that beaded on his brow. The late afternoon heat was stifling. The August sun’s hot rays radiated off the pavement. It didn’t help the sick feeling in his gut.

“He was following up on a lead on a previous robbery attempt,” Sergeant Davis said, “questioning a woman in the apartment across the street. As near as we can tell, he must have heard the first gunshots and he ran outside to check it out.

“The suspect began shooting toward Beattie, and Beattie returned fire, but then the suspect ran toward the woman’s car. He grabbed the woman and threw her aside so he could get into the car. That’s when Beattie took off after him on foot, right about the time another car came racing down the street. The car slammed into him. Beattie didn’t have a chance. Near as we can figure, it was the getaway car.

“The woman’s sitting in one of the patrol cars. She’s pretty shook up. Her eleven-month-old baby was in a car seat in the back. Both are okay. The suspect never made it out of the parking lot. It seems Detective Beattie got off a fatal shot before he was struck by the car. CSU is still working over the perp.”

Lieutenant DeLuca’s jaw clenched as his eyes focused on the bloodied features of his detective. Beattie was a good man, one of his best. He’d left a wife and two children, middle school age. Just last week, the man was telling him about a trip he was planning to take with his family to the Wisconsin Dells. He remembered the light in Beattie’s eyes as he talked about how excited the kids were.

“EMS worked on him for a full twenty minutes before calling it,” Davis continued. “CSU found a bullet hole in his neck and one in his chest. Not sure what really killed him—the impact, the gunshots, or smacking his head on the pavement. Take your pick.”

“What about the owner of the convenience store?” DeLuca asked.

Lieutenant DeLuca shook his head. “Are they done here?” He nodded down at Beattie.

“Just finished up, for now.”

The lieutenant eased the edge of the sheet down and said a silent prayer for his detective before looking up again at Davis. “Then let’s get him the hell off the street. Has his wife been notified?”

“I’ve already sent one of our men over there.”

“We’re not releasing his name until I know his wife’s been notified.”

“Any chance the first guy out of the store is the same one that slammed into Beattie?”

The sergeant shook his head. “I don’t know. The timing’s pretty tight. So far, none of the witnesses have put the two together.”

“Then we’re looking for a third suspect.”

“I think so. I’ve got officers canvassing the area.”

Lieutenant DeLuca glanced around at the crime tape surrounding the scene, at the crowd of gawkers and media already assembled around the perimeter. He hoped their man got there before word got to Beattie’s wife. With today’s instant information age, he was sure the news of another cop killing in the city of Chicago was spreading like wildfire across the airwaves, as well as the Internet. He glanced again at the assembled media. They’d want an official statement soon.

“What about the hit-and-run?”

“We’ve got a description of the vehicle. Put an APB out on all channels. Nothing yet, but we’ll find him, Lieutenant.”

“You’re damn straight we’ll find him. What about the prior attempted robbery? Any leads there?”

“We’re checking the surveillance video. We’ll be putting a description of all the suspects out within the hour, along with the video. Of course, they’re all wearing ski masks, but who knows? Maybe we’ll get lucky and somebody will recognize them. The two robberies could be tied together.”

“In the middle of the day?”

“A dare. An initiation, maybe. Crazy what these punks are trying now.”

The lieutenant’s stomach burned. No matter how hard they tried to clean up the streets, some days it seemed like the gangs were getting the better of them.

His cell phone buzzed. He reached into the inside pocket of his suit coat and pulled it out. The caller ID indicated it was Andi, his wife.

Officer Andrea DeLuca was a detective, too. She would have heard about the incident already. She’d also know who was shot and that it wasn’t him.

Deciding he wasn’t ready to talk to her about it just yet, he let the call go to voice mail. Less than thirty seconds later, it buzzed again, this time indicating a text.

He sighed and texted back.

Are you going to be able to make it to the dinner tonight?

Damn, he’d pretty much forgotten about the dinner. His sister Angela and her boyfriend had invited the DeLuca clan, along with about fifty of their closest friends, to the soft opening of her boyfriend’s bistro. His sister had been pretty adamant about all of them attending.

He texted back, Chances are, not. Go on without me.

He paused for a second and then typed, Me too, and hit send. Why did he hesitate? He didn’t exactly know. Things had been tense between them lately, but he couldn’t quite put his finger on why. Perhaps it was because he was up for a promotion soon and he was working long hours to try to not screw it up. Between that and Andi’s own dedication to their chosen line of work, it seemed they were spending less and less time together. He glanced back down at Detective Beattie. The team had returned and was now placing his body into a body bag. He frowned. Maybe it was time he and Andi did some re-evaluating.

He was about to slip the phone back into his pocket when it buzzed again. Glancing once more at the caller ID, he didn’t recognize the number or the area code. It definitely was not one of his fellow officers or a member of his family. Ignoring the call for now, he slipped the phone back into his pocket and scanned the assembling media again. No less than three satellite trucks had joined them.

According to his cell phone, it was 4:53—just in time for the evening news. Loosening his tie, he took a step toward them. The temperature was a searing ninety-seven degrees. Add in the humidity and the heat index, it had to be about one hundred and five. The heat didn’t help the tension in the streets. It was a well-known fact that crime, including homicides, went up when the temperatures rose.

He glanced up at the sky. They could use a cold front to come blowing through, complete with thunderstorms. It would be a welcome relief.

But there wasn’t a cloud in sight. 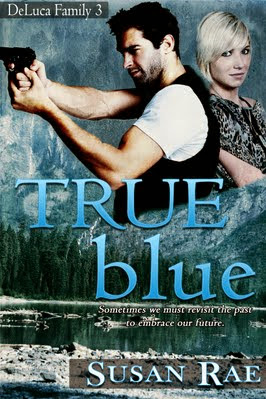 Susan Rae grew up in the suburbs of Chicago and received her Bachelor of Arts Degree from Columbia College, Missouri with an emphasis in creative writing. She penned her first melodrama in fifth grade for a Girl Scout Drama badge. Complete with hero, heroine, and dastardly villain, it wasn’t so different, really, than the romantic suspense she writes now.

“I love writing romantic suspense because it allows me to combine a sexy, passionate love story with a gritty suspense tale—in my opinion, the best of both worlds. It also allows me to express my appreciation for the outdoors in the settings that I recreate on the page.”

Freefall, Susan’s second novel, takes place in Wisconsin's Kettle Moraine Forest and beautiful Door County. ICE blue returns to the busy streets of Chicago and the shores of Lake Michigan to continue the story of the DeLuca family which began in her award winning first novel, heartbeats. In TRUE blue, the third book in the DeLuca Family series, Susan was thrilled when it became apparent that her characters must take a trip to Montana’s majestic Glacier National Park.

When she is not sketching characters, you might find Susan on the golf course working on her handicap, or traveling around the country seeking out new settings for her novels with her husband and empty nest puppies, Ginger and Nikute. To read more about Susan’s novels and the writing life, please visit her website/blog at www.susanrae.com 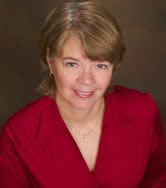 There is a blitz-wide giveaway of a $10.00 Amazon gift card. Simply click on the following link which will take you to the rafflecopter form where you will follow the instructions there to enter: http://www.rafflecopter.com/rafl/share-code/NDA4MjY0MDFhMDY3NGJmNzk2NDA5M2VhM2I4M2I2OjI3Mg==/