(from theguardian.com
by William Atkins) 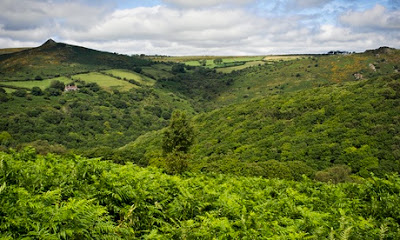 Where nature has maintained its inviolability' … bracken on Dartmoor. Photograph: Martin Argles for the Guardian

Three years ago I set out on a series of walks on and around some English moors. Starting in the south west (Bodmin Moor, Exmoor, Dartmoor), I made my way to the Pennines and the Borders. My guides were the people I met, but also the writings of those who'd been there before me.

The book that resulted from those walks is underlain by a trinity of novels that shaped our perceptions of the moors: RD Blackmore's Lorna Doone, Arthur Conan Doyle's The Hound of the Baskervilles and Emily Brontë's Wuthering Heights. But there are other volumes, less well-known, that guided my walking and my thinking. They're a peat-slathered, irascible lot, not all of them beauties; but they became precious to me.

1. The Heart of the Moor by Beatrice Chase

Sent to Dartmoor on doctor's orders in 1903, Chase eventually came to refer to herself as the "Lady of the Moor". In her early books she describes her new neighbours with the florid, prayerful aloofness of a missionary. But for all her flaws as a writer and a neighbour, she can, occasionally, startle you with her vigilance. A sheep's eye, for instance, "looks to be made in two pieces joined in the middle by a long black seam".

2. Tarka the Otter by Henry Williamson

Tarka was rewritten 17 times, according to Williamson – "in what can only be described as anguish arising from a sense of insufficient knowledge". To ease that anguish he sought out his fictional otter's haunts, including the "high cold moors" of Devon and Somerset, often sleeping outdoors. His friend Ted Hughes, who met Williamson while living (with Sylvia Plath) in the shadow of Dartmoor, observed that the older man came to resemble his subject – "that fierce, fiercely alert, bristly look". In order to write about an otter, it was necessary to become one.

3. Remains of Elmet by Ted Hughes

For Hughes himself, growing up in what was then the West Riding of Yorkshire, Tarka "gave shape and words to my world". In this volume of poetry he returns to the valleys and moors of his Calder Valley youth, reviving the land's myths and histories, and his own boyhood memories. In the volume's early editions his poems are accompanied by Fay Godwin's monolithic black-and-white photographs of the valley and its surmounting hills. She and Hughes shared with Emily Brontë a vision of these moors as not merely ruinous and bone-strewn, but places of transcendence – "a stage for the performance of heaven".

Ted Hughes's fellow poet and friend spent several impoverished years in the 1960s garreted high above Saddleworth, on the edge of its dark moor, and in time he began to see the land with the beadiness of a native. In his epic little prose book about the south Pennines, he's snarky about Saddleworth's "didactic and sentimental" poet laureate, Ammon Wrigley; but both men understood that the moors were not to be accommodated by any Romantic notion of "landscape". For Hughes, the moor was a "desert", albeit one that had a "particular grip" on him. A generation earlier, Wrigley saw the moor as an enemy to be vanquished – a glowering menace, forever threatening to retake the cultivated land.

Of the throng of early 20-century guides to "Brontë Country", Southwart's 1923 book is the only one that really gets its feet wet. She writes of the moors above the Brontës' home village of Haworth with an earned lyricism, understanding that the moors' "dreariness" was not a straightforward thing. Among her human subjects is a soldier returned from war, Ernest Roddy (though she doesn't name him), who went to live, with his chickens, at Top Withens, the ruined farmhouse said to be the model for Wuthering Heights. "The loneliness of the moor," Southwart maintained, "is not the lack of kind, but the hunger for something unattainable."

The vicar of Danby from 1850 to 1900 reckoned he walked 70,000 miles "in the prosecution of his clerical duty". Forty Years in a Moorland Parish is a charming shambles, a brimming, tottering archive of the mythologies and terrain of the Cleveland moors – a place that came to represent for Atkinson not only liberation, but the promise of eternity.

7. The Moorlands of North-Eastern Yorkshire by Frank Elgee

When Elgee was a boy in 1890s Middlesbrough, recovering from the empyema that would ruin his health and shorten his life, his father bought him a copy of Canon Atkinson's British Birds' Eggs and Nests. Elgee went on to know the North York Moors better than even his Danby predecessor, and wrote what remains the most comprehensive, and impassioned, description of that region. "It would have been natural to have been in love," he wrote of his breathless, adolescent moor-walks. "I was: with a cold stony waste of hills and dales."

8. The Middle Marches by GM Trevelyan

The eminent historian was a Northumberland boy, and knew and loved the county's moors as one who'd tramped them as a child. His potted history is also an elegy: "Cloudland", he calls the moorland heights; and he captures more vividly even than Walter Scott the feeling one can experience on those moors, that not only the world, but oneself, has been enlarged.

9. The Black Dwarf by Walter Scott

"Haunted by a consciousness of his own deformity", the antihero of Scott's 1816 novel of misanthropy and revenge makes his home on "Mucklestane Moor", above Liddesdale. The Black Dwarf is based partly on a real-life recluse known to the author, and partly on a spiteful supernatural being of Border lore, the "Brown Man of the Muirs". Scott was aware of his novel's own deformity, and regretted its 'bungled' ending, but it's likely that it was absorbed by one acolyte of his, Emily Brontë: it's not hard to see its influence upon her own novel of moorland misanthropy and revenge.

10. The Desert World by Arthur Mangin

The French naturalist includes in his definition of deserts "all the regions … where Nature has maintained her inviolability". In his strange and beautiful 1869 book he takes in not only the Sahara, but the Russian steppes, the "prairies, pampas and llanos" of the New World, the Poles, the Pyrenees – and, in England, "an extensive and romantic tableland of granite": Dartmoor. Like Glyn Hughes on Saddleworth Moor, Mangin knew that the word "desert" derived from the Latin desertum: "abandoned". And on a day of drizzle, standing among the stone hut-circles of Dartmoor, that feeling – of the landscape's abandonment – can be potent.

• Blake Morrison reviews The Moor: Lives, Landscape, Literature by William Atkins
Posted by Mollydee55 at 10:18 AM