Baudelaire Dismissed Victor Hugo As 'an idiot' In Unseen Letter 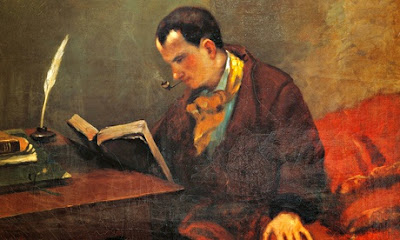 
Victor Hugo, revered author of Les Misérables and towering French literary giant, was also something of a nuisance – at least according to his contemporary and fellow poet Charles Baudelaire.

In a January 1860 letter to an unknown correspondent, Baudelaire bemoans how Hugo "keeps on sending me stupid letters", adding that Hugo's continuing missives have inspired him "to write an essay showing that, by a fatal law, a genius is always an idiot". The letter is being auctioned by Christie's in New York, alongside a first edition of Baudelaire's celebrated poetry collection Les Fleurs du Mal, containing the six poems that were deleted from the second edition. The set is expected to fetch up to $100,000 (£60,000), according to the auction house. 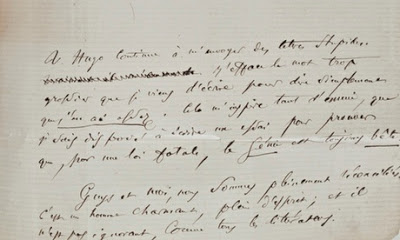 
Publication of the first edition of Les Fleurs du Mal in 1857 was followed by Baudelaire's prosecution for "offending public morals", with the judge ordering his publisher to remove six poems from the collection. Hugo supported Baudelaire after the prosecution in August 1857, telling him that "your Fleurs du mal shine and dazzle like stars", and, in 1859, that "you give us a new kind of shudder".

Baudelaire had, in his turn, dedicated three poems in Les Fleurs du Mal to Hugo, but the Pulitzer prize-winning poet CK Williams has written of how despite this, "Baudelaire secretly despised Hugo". Rosemary Lloyd, meanwhile, writes of the "corrosive envy" of Hugo revealed by Baudelaire in his letters, in her Cambridge Companion to Baudelaire.The author, while praising Les Misérables in public in an 1862 review in Le Boulevard, described it as "immonde et inepte" – vile and inept – in a letter to his mother, adding, "I have shown, on this subject, that I possessed the art of lying".

The first edition of Les Fleurs du Mal, tooled in gold and silver, colored inlays of flowers and symbols of death and evil, similiarly tooled. Photograph: Christie's
"Baudelaire, to his chagrin and perhaps as a factor in his ultimate self-destruction, had to contend with Victor Hugo: poet, novelist, essayist, polemicist of unreal energy and fluency … literally the most famous man in the world, with his own admirable social and political projects, his own vast ego, his domination of poetry and culture," writes Williams.

Williams has it that while Hugo praised Baudelaire, he "surely underestimated the significance" of his fellow poet's work, "and never in his dreams would have imagined that for the future Baudelaire would define the aesthetics of the century that followed him, and that he, Hugo, as an influence, as a genius, would become more an item of nostalgia than a symbol of artistic power and significance".

The 1860 letter is largely about Edgar Allan Poe, whose work Baudelaire translated. The mention of Hugo – "Hugo continue a m'envoyer des lettres stupides" – is in a postscript. Christie's is auctioning the book and letter in New York, alongside an edition of Walt Whitman's Leaves of Grass, valued at up to $150,000 and printed for the author, and a $120,000 notebook of Robert Louis Stevenson's poetry and prose.
Posted by Mollydee55 at 6:08 PM