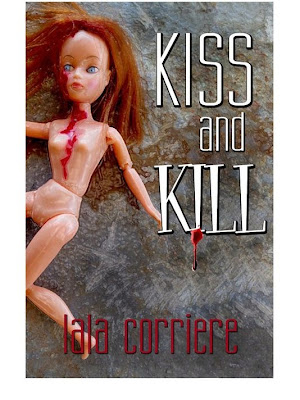 
HEA gets to chat with Lala Corriere, author of romantic suspense Kiss and Kill, about her new release and her connection to awesome author Sidney Sheldon.

Joyce: Welcome to HEA, Lala! Please tell us about Kiss and Kill.

Lala: The nefarious antagonist is delicious. Sulfurous. A fun character to write. Not so fun going inside his head.

I adore the duplicity within my main character. She's both smart and naïve. Headstrong, but dubious about her decisions. She's an open book about her own loveless life, but harboring a deep secret.

As an author, I was concerned about pulling off a second/first point of view, but my readers proved my worries to be without merit. Hmmmm … maybe I'm both headstrong and dubious!

The story unfolds just as romance author Chyna Blaze decides to give up her life of fear and anxiety, and the inevitable panic attacks that ensued. Now, she faces a new problem. Her peers are being knocked off, one at a time, and the persistent detective insists she's high on the list. This time, it's not the best-seller list.

When her publicist arranges for a couple of fake dates with the well-known literary giant, she finds the publicity stunt annoying, but harmless.

Orson Locke had given up writing years ago, but he isn't giving up any of his vices. He likes his sugar straight out of the cans of white icing, chased by plenty of bourbon. He likes his Edgar Allan Poe. And he likes his temptations well-sated.

Joyce: You have an interesting Sidney Sheldon connection. What can you tell us about that?

Lala: My father became steadfast friends with another famous author of non-fiction. Dad told me that, after approaching this writer, he realized the man lived in a shell, and not by his own devise. People assumed he was unapproachable.

As my first manuscript was ready to evolve in to a book, I took my dad's experience to heart. Almost fearless, I contacted the best-of-the-best. Authors writing in my genre. Two persons actually responded to my inquiries, and read the manuscript.

Andrew Neiderman, the author of The Devil's Advocate, offered me the advice to put my story in the first person. Sidney Sheldon offered me several blurbs, along with encouragement that turned in to long-term mentoring until he passed away in 2007.

AP_OBIT_SHELDON_14384577
Author Sidney Sheldon in 1997.(Photo: Joe Tabacca, AP)
My mother was a Sheldon super-fan, and I'm so glad she was still alive when Sidney and I started communicating. Mom didn't make it to see my first book in print, but I know she was proud of me and my relationship with one of her favorite authors.

The benefits of my friendship with Sidney Sheldon are those of priceless memories.

Joyce: What one piece of writing advice did Sidney give you that has always stuck in your head?

Lala: He told me to first learn the rules of writing, and then break them with purpose. I'm now a happy little rule-breaker. And he told me what we all hear, but somehow I gave it more credence when he said it. DO NOT LISTEN TO THE NAYSAYERS.

Joyce: Was there anything about Sidney that you can tell us that we might not already know? Like, his guilty pleasure or some of his favorite authors?

Lala: What I knew about him, and only after a period of time, was that he was severely, if not cripplingly, bi-polar. I would not hear back from him but for maybe a cryptic one-liner, and then suddenly I would hear volumes. He revealed this truth in his autobiography.

Joyce: Do you have a favorite Sidney Sheldon book? Mine would be Rage of Angels, which is actually the book that started me on my own writing journey.

Lala: Rage of Angels was probably the first Sheldon book I read, and I was hooked. The Sands of Time must have come next. One of my favorites was The Other Side of Midnight, followed by the later novel, The Best Laid Plan, with a delightful twist. I like twists, no matter where they come in the course of storytelling.

It was very difficult for me to read Sidney's memoir, aptly titled The Other Side of Me.

Joyce: What can readers expect to see from you next?

Lala: Bye Bye Bones introduces my readers to Private Investigator Cassidy Clark. I love this woman, even though she won't get out of my head. She's constantly nudging me and changing my words around. She's stubborn and bullish and calls them as she sees them. I think she'll be sticking around for a long while, if only because I know she won't go away.

In Bye Bye Bones women of success, and happiness, and high aspirations have disappeared in the Tucson area, all within about 18 months. There doesn't seem to be any common thread between five, and now maybe six women. Cassidy must find the connection, because whether it's a killer or a kidnapper, he's still out there.

Find out more about Lala and her books at lalacorriere.com.

HEA curator and contributor Joyce Lamb is a USA TODAY best-selling author of romantic suspense and three-time RITA finalist and has been a professional journalist for 25 years. You can reach her at jlamb@usatoday.com and follow her on Twitter (@JoyceLamb). You can also follow HEA on Twitter (@HEAusatoday).
Posted by Mollydee55 at 4:28 AM