The vampire, Lucian val Drasmyr, has been defeated, but not destroyed: Now he serves another evil: Korina Bolaris, a young and gifted sorceress bent on subverting the power structure of Drisdak. Only Coragan of Esperia can hope to stop them. But is even he prepared to face the dark cult who claims her as their own: the Children of Lubrochius?

Across from Ambrisia, Coragan placed his hands on the table and got right down to business. “Your note said someone’s life is in danger?” he asked.

“Possibly,” Regecon answered, leaning back in his chair. “We have another missing person issue. At this point, we don’t know if she is alive or dead or what.”

“Who is it?” Coragan asked.

“My student, Marissa,” Ambrisia interjected. “She disappeared a little over three weeks ago.”

“She disappeared during the day,” Ambrisia said. “Our best diviners are working on the problem—”

“Your diviners are always working on the problem,” Coragan said. “Why is it that your magic never seems to solve the missing person issues. All it does is create questions, and I’m the one who has to sort out the knots.”

“In this case, the vampire, although most probably not the cause of the disappearance is definitely a culprit in a number of complications,” Ambrisia explained. “As you know, a vampire generates an aura of black time that interferes with divination. This aura surrounds the vampire as it moves and disrupts attempts to access the temporal continuum in which it operates creating pockets of inaccessible time as far as divination is concerned. The stronger the vampire, the stronger the aura. Lucian spent nearly a week besieging our guild house. And, as we feared, there is a great deal of temporal distortion caused by his aura.”

“So, once again your magic is rendered useless and you must fall back on more mundane methods. Namely, me,” Coragan said. 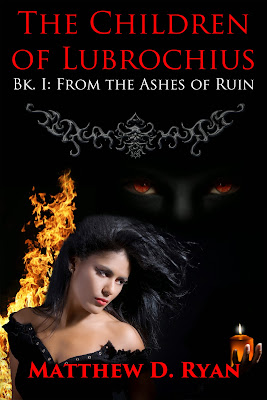 The prequel, Drasmyr, is currently available free as an ebook at Smashwords, Amazon, Barnes and Noble, and elsewhere.

Matthew D. Ryan is a published author living in upstate New York on the shores of Lake Champlain. Mr. Ryan has a background in philosophy, mathematics, and computer science. He has a black belt in the martial arts and studies yoga. He has been deeply involved in the fantasy genre for most of his life as a reader, writer, and game designer. He is the operator of the web-site matthewdryan.com which features his blog, “A Toast to Dragons,”a blog dedicated to fantasy literature, and, to a lesser extent, sci-fi. Mr. Ryan says he receives his inspiration from his many years as an avid role-player and fantasy book reader. He has spent many long hours devising adventures and story-lines for games, so it was a natural shift moving into fantasy writing.

Mr. Ryan is the author of the exciting dark fantasy novel, Drasmyr,, its sequel, The Children of Lubrochius, and a growing number of short stories. His first novel, Drasmyr, has consistently earned reviews in the four and five star range and serves as the prequel to his upcoming series: From the Ashes of Ruin. In addition to Drasmyr and The Children of Lubrochius, Mr. Ryan has published several short stories on-line, including: “Haladryn and the Minotaur,” “The River’s Eye,” and “Escape.” 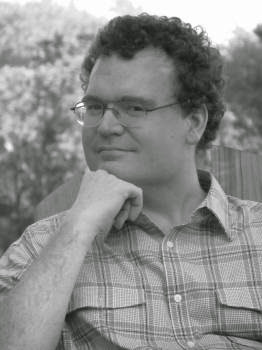 Why do I write fantasy? My first impulse to answer that question is pretty direct and simple. I see fantasy writing as a form of escapism. Other forms of writing are limited by the basic facts of reality: the Laws of Physics, Biology, and all the other sciences. In other forms of writing, everything must be justified both logically and scientifically. That is not the case with fantasy.

With fantasy you can have magic, talking animals, the overt intervention of deities, and other similar events that stretch the bounds of the possible in a manner that does not require justification. Although the story must still maintain a logical cohesion, it need not strictly adhere to the Laws of Science. Science, as grand and wonderful as it is, is a limitation to a story-teller. Fantasy represents the writer unbound. Any fancy can be fleshed out and made real. There are no limits beyond the cohesion of the story as a whole.

That last part cannot be stressed enough, though. A story must still cohere. That’s what makes it a story. Magic is permissible, of course, but it must follow its own logic. That internal logic is what makes the fantasy novel interesting; it makes it stand out. Modern fantasy is heading in the direction where every system of magic proposed by fantasy writers is supposed to be spelled out with a level of rigor compared to the rigor of science. No longer can a writer conjure up a magical effect to solve a plot problem. You know the situation: a writer writes herself into a corner and then conjures up some heretofore unmentioned magical ability or enchantment to get the character out of the problem. Internal consistency, like science: that’s the goal. In my view, though, that goal may be impossible to a certain extent. One author cannot elucidate a system of magic that rivals the many life-times of painstaking work and research that science represents. There is just too much quality work there. At best the writer can produce a miniaturized science-like magic system. Still, that is a commendable achievement and it provides a goal to shoot for. A goal of self-consistency. Rigorous fantasy can strive to be as meticulous and as internally consistent as rigorous science fiction. If it can reach that level, it has reached a hefty benchmark in the quality of its work.

I write fantasy because I enjoy the challenge of making fantasy real for the reader. I like having a coherent magic system and, once that has been established, the freedom that comes with fantasy writing. I can bring anything I can imagine clearly into written existence as long as it is structured and well-thought-out. Fantasy lets me work both my logical brain and my creative brain at the same time. I find such rewarding and fulfilling in a way that other forms of writing are not.

I don’t write fantasy all the time—other genres like philosophical non-fiction are creeping into my schedule—but fantasy dominates the bulk of my work and it is where the most of my expertise lies.