Roald Dahl Owned A Very Famous Piece Of Art, And Now It's Up For Sale For $20 Million

(from huffingtonpost.com
by Katherine Brooks)


When we reminisce about the late children's book author Roald Dahl, we usually conjure images of giant peaches, chocolate factories and fantastic foxes, filling our heads with beautiful illustrations plucked straight from the writer's many, many literary masterpieces.

We do not, generally, wonder about the man's personal art collection, and as such, we had no idea he had such great taste. Case in point: He owned a very famous portrait of Lucian Freud -- yes, Sigmund's grandson -- painted by the great British artist, Francis Bacon. And that same painting is now up for auction, expected to fetch between £8,000,000 and 12,000,000 (roughly $13 million and $20 million), Christie's stated to HuffPost. 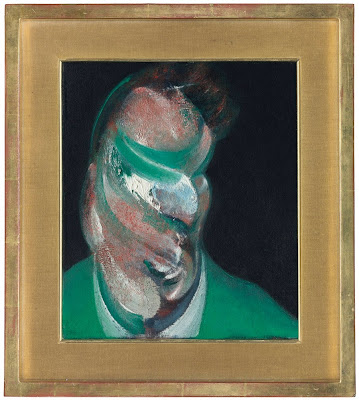 
The trio of renowned figures associated with this painting possesses its fair share of collective fame and intellectual cache. The two deceased artists, Bacon and Freud, were frenemies, to use modern parlance. They would often capture their friendship in portraits of each other; a friendship that later turned into a "well-documented" rivalry.

Dahl, on the other hand, was a longtime friend and fan of Bacon's oeuvre. They bonded over a shared love of Vincent van Gogh, one of many topics we can imagine them discussing over dinner at Dahl's Buckinghamshire Gipsy House in the 1970s and 1980s. "You cannot begin to appreciate any work of art in the true sense until you have studied the personalities involved and the struggles they had," Dahl mused to Architectural Digest in 1981.

According to The Guardian, Dahl bought "Study for Head of Lucian Freud" in 1967, the year it was completed, with the money he'd been paid for Charlie and the Chocolate Factory. That amount was just £2,850 ($4,800).

"All I can tell you about the work of Francis Bacon is that it stirs and excites me emotionally," Dahl reportedly proclaimed. "I know there are some people who are not moved by them at all, and to those unfortunates I would say 'jolly bad luck, I can't help you'."

The sale of the piece, planned for Christie's Post-War & Contemporary evening auction in London on July 1, will benefit the philanthropic work of Dahl's family's estate, including the Roald Dahl museum and story center and Roald Dahl’s Marvellous Children’s Charity.

Let us know what you think of today's random bit of literary and art history in the comments.