Eden Montgomery arrived in the lawless territory of Whistle Creek as a newlywed, but she quickly lost her husband to his mistress…gold, and the claim he called The Golden Angel. When a premature blast at the cave killed her husband, and took the life of her unborn baby, Eden closed the mine…for good. Now she runs the local supply store, and in her bitterness, looks down on the men who shirk familial responsibilities in pursuit of something as meaningless as gold.

Joseph Benton knows the crime, filth and disease of a mining camp is no place for a child. So when his young son Christopher suddenly arrives at his tent, he turns to Eden Montgomery to care for the boy. But the uppity and righteous Eden refuses. Joseph is shocked at what he thinks is her lack of maternal instinct. Now he’s torn between his need to strike gold…and his desire to be a father.

When a ruthless speculator encroaches on the camp, threatening Joseph and the other miners, Eden knows she must do the one thing she vowed never to do…for the one man she vowed never to love.
BOOK EXCERPT
It took several moments for Joseph to comprehend not only a female’s voice in the camp, but one calling out a Mr. Benton. By the time he got his bearings on the notion, his name had been called three times. Intrigued, he turned toward the whimsical voice and said with caution and curiosity, “I’m Joseph.”

In an instant, his heart fell like a stone as his eyes went from the shopkeeper to the little person at her side. Surely, his mind was playing with him and being cruel. It wouldn’t be the first time lack of nutrition did things to his head. But the apparition continued to move toward him. Then he heard a frightful word come from the boy.

He nearly choked and staggered backward. Questions assaulted him. Where was Katherine? Francis? Why is the storeowner frowning at him like she wanted to hurt him? And definitely, the man with her looked like he would carry out the deed.

The woman gave his son a small nudge forward.

Christopher ran, promptly wrapping his arms around his thighs. Joseph threw a confused glance at the woman, while planting his palm on top of his son’s familiar head. Before he could help it, he flung himself down and held on tight, likely to never let go. “I don’t understand, son. I was going to come home to you—why did you come?”

The woman emitted a sound of pity and Joseph looked up to see her turn away. Was she crying? Alarm shot through him. “Christopher, where’s your ma?”

Baby Nell? Who was Baby Nell? He sat hunched on his heels, unable to speak, and buried his face into his hands. What had he done?

He became aware that the rest of the camp was now at a standstill—a woman and child coming into their midst was highly unnatural. Now all attention was on him and he didn’t like it. Imploringly, he pierced the woman with a look as she began walking away with the man.

He found his voice and choked out, “Wait!” 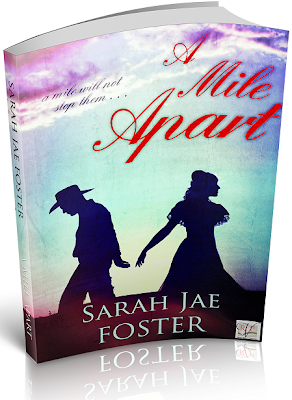 ABOUT THE AUTHOR
Sarah Jae Foster has a desire to portray a raw brand of inspirational stories. While she believes there is a purpose for guidelines of inspirational works, she also believes in portraying the reality of life, as it is today.

Sarah Jae is a Christian, a wife, and a mother, wholeheartedly yet imperfectly, loving God since she was a child. She wants to share stories about characters with faith who mess up big time due to the seductions in society. In doing so, she's willing to take a risk and be on the cutting edge of writing for the inspirational market, sharing what's in her heart and in the world today.


a Rafflecopter giveaway
Posted by Mollydee55 at 8:15 AM