(from usatoday.com
by Martha T. Moore) 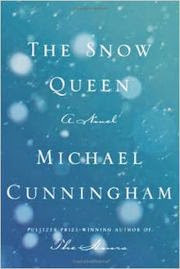 Despite its fairy-tale title, Michael Cunningham's novel about brothers and their search for authentic fulfillment clearly takes place in our current world.

The story's chronology coincides with George W. Bush's second term: Tyler Meeks, a fortysomething bartender and musician, is prone to the occasional rant about the failures of the "worst president in history.'' The setting is a ratty apartment in Brooklyn, where Tyler's brother Barrett works in a clothing and jewelry shop that's so hip it may stop selling skateboards because they're just too obvious.

But The Snow Queen wears its contemporaneity lightly, because the novel really concerns itself with eternal themes: the quest for love, the unfairness and inevitability of death and the hope of a meaningful life.

Barrett and Tyler are both looking for that meaning – Tyler in writing a song for his wedding to Beth when she is near death from cancer and Barrett by occasionally slipping into a back pew at church.

Barrett, the Ivy-educated shop clerk, is possessed of a "magic" by those who know him. En route from a dentist appointment, recently dumped by his boyfriend (via text), he sees a celestial light in the sky over Central Park.

Tyler has "the body of an aerialist," a penchant for standing on open windowsills; he adores and takes care of his cancer-stricken fiancée and feels guilty about the clarity and purpose this gives his life, but he is a thoroughgoing liar about his drug habit.

At the same time, the Meeks brothers try to come to terms with the freakish nature of their mother's death, and to live up to the charge she laid on each of them, separately, to look after the other.

Cunningham beautifully portrays the depth of the sibling bond — what they tell each other and what they don't — but also, as in his Pulitzer-winning novel The Hours, he explores relationships among threesomes: the brothers and Beth — Barrett adores her and considers himself her backup husband — the brothers and Liz, who owns the shop; and Barrett, Liz and Andrew, her handsome young lover.

While The Hours is told through the interior monologues of three women, The Snow Queen is more guy-friendly in its portrayal of brothers — "the talks and fights and farts and laughter over the farts.'' Also gay-friendly: Barrett learns to move on from his fixation on an exquisitely handsome young man and try again for a lasting connection with a man who says Coke is The Beatles but Pepsi is the Rolling Stones.

Cunningham's writing still loops the loop from quotidian to cosmic at top speed: a Formica table picked up from the street has "a ragged-edge gap the shape of the state of Idaho. When this table was new, people expected domed cities to rise on the ocean floor. They believed they lived on the brink of a holy and ecstatic conjuring of metal and glass and rubberized speed.''

The novel ends on the brink of the 2008 presidential election. Tyler is convinced the Republican ticket will win, and is dreading it even as he wants to be proved right. We readers know who won, and by the end of this thoughtful, intimate novel, we are hoping that victory is Cunningham's way of letting us know the Meeks boys will succeed in their quests, as well.