Steven Bannister – Fade to Black
Allie St Clair is young and brilliant and today she's been promoted to Detective Chief Inspector at New Scotland Yard. But the time for celebration is short. Something is wrong in rain-swept London. Very wrong.

John Paul Davis – The Cortes Enigma
1581: It appeared in the west as the sun was setting, a distant silhouette like a fire on the water. Twelve hours later it appeared again, this time much closer to the mainland . . . Who was on board or where they came from remained a mystery . . . No trace of the vessel was ever found . . .

David Leadbeater – The Razor’s
Edge Trent, Silk and Radford are the Razor’s Edge and the best spy team in the business – until the government they toiled, served and bled for, disavowed them.

Andy Lucas – Race Amazon
James Pace, ex-RAF helicopter pilot and amateur cameraman, is still trying to figure out what to do with the rest of his life when a child's bullet nearly kills him.

Karen Perkins – Dead Reckoning
A historical adventure of piracy, love and revenge in the Caribbean in the seventeenth century.

C K Raggio – Heron Park
A small Long Island town erupts in a panic when a woman and her dog are found savagely murdered on a popular hiking trail. 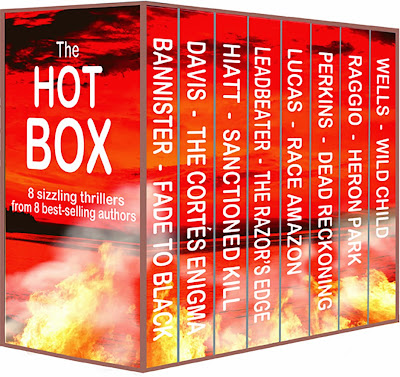