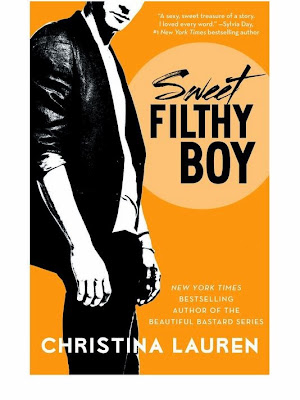 Sweet Filthy Boy by Christina Lauren (erotic contemporary). Oh, I enjoyed this book so much. As the title states, our hero is both sweet and filthy, a lovely combination. But first let's talk about our heroine. Mia Holland has just graduated college, and to blow off some steam before moving to Boston for business graduate school, Mia and her friends head to Vegas. They get a little drunk. OK, a lot drunk, and they meet pretty, sexy boys and have a really good night. And by really good, I mean, they all end up married. Oopsie! Mia wakes up with the mother of all hangovers and a ring on her finger. The sexy guy she marries is named Ansel. He is French and visiting Vegas with his friends before heading back to France, where he is a lawyer. Ansel likes to do spontaneous things, so his friends are surprised he "fell in love" in one night. Mia, on the other hand, is a little more freaked out. But during her drunken rampage, she wrote a letter to herself that urges her to stay married to Ansel for at least a month, to see where things go. Still not on board with all of it, Mia decides to just head home and get an annulment. But at the last second, she finds herself on a plane to France, and spending the summer with her new husband.

The set-up might sound silly, but this crazy marriage and flying off to France with a near stranger actually works really well in this book. These two have chemistry, and while things don't go all great once they start living together, their struggles are real. Ansel works a lot, Mia is home by herself a lot. They have to figure out ways to make the time they are together really count (staying in bed is one of these ways). Mia is a little more on the shy side and has to really put herself out there as she discovers her true self. There is conflict toward the end that I liked and I think it is resolved well. I smiled a lot in this one (Mia's scenes with her girlfriends made me laugh) and I blushed. A lot. Can't wait for the next one in this series. 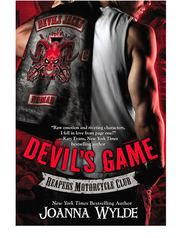 Devil's Game by Joanna Wylde (erotic contemporary). This is one of my favorite series. In Devil's Game we not only get a glimpse into the Reaper's Motorcycle Club, but also their rivals, Devil's Jack. Maybe rival is the wrong word, as these two are on a very frail truce, which gets tested when Em, the Reaper's president's daughter, gets kidnapped by Liam, who is with the Devil's Jack. Em and Liam had been texting and flirting for a long time and finally meet at a bar. Unknown to Em, while Liam is attracted to Em, he is really using her as leverage against her club. When bad stuff goes down that night, Liam kidnaps Em and holds her for ransom. But they still having feelings for each other, which makes captivity very interesting (and by interesting, I mean they make out a lot). Em eventually escapes and now in a Romeo and Juliet retelling, these two have to find a way to be together without starting an all-out war between the clubs.

Joanna Wylde writes such good motorcycle club heroes — alpha, gritty, not always moral. They are more rough and gruff. But who really shines in this book is Em. She has always been the good sister, trying to listen to her dad and follow club rules. When she falls for Liam, she gains maturity in the way she deals with her relationship. She is young but has a good head on her shoulders. I loved her growth and her maturity and how bad-ass she becomes. As a reader, I felt proud of her. Em's dad's book is next, and I'm so excited for it. I recommend all the books in this series. 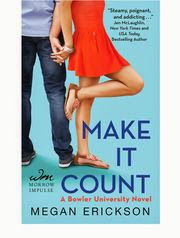 Make It Count by Megan Erickson (New Adult). This is a really cute story with a more nerdy hero and a heroine with an undiagnosed learning disability. Kat has always had trouble in school with reading and looking at numbers. Squeaking by in high school, she was hoping college would be a clean slate, but her grades are in the dumper. She is dating a guy named Max, who is a jock, and may care more about the hockey score than his girlfriend. Max's roommate and best friend is named Alec. He wears glasses, and his hair in a pompadour, and he is super smart. Alec and Kat have always had a friendly, joking around friendship, but things start to change between them. When Alec becomes Kat's tutor, they realize they can't ignore their chemistry. But Kat is still with Max and they both don't want to hurt him.

Sometimes I get nervous reading books where the heroine is dating someone other than the hero to start the book, but this one works out pretty well. It takes Kat awhile to break-up with Max, but I think it is done appropriately. The first half of this book is really strong. Kat's embarrassment over her grades and feeling stupid comes across so strong. I was really impressed. I also love how at first Alec kind of makes fun of her, but then realizes she truly wants to be a better student and he becomes her champion. He gives her confidence, and praise until she eventually discovers there is a deeper reason with her struggle to read. I found this book refreshing – so many of the new adults I read are so filled with angst and over the top emotion. This one is a little lighter and I enjoyed it.

Mandi Schreiner started romance review blog Smexy Books in 2009. She is obsessed with reading romance novels and collecting fictional boyfriends.
Posted by Mollydee55 at 4:18 AM