She thought she’d met the man of her dreams. She couldn’t have been more wrong.

His letters had won her heart. Leaving everything behind, Lisa Hanlon is ready to start a new life in the West. Sheriff Donald Skroch is attractive, influential, and eager to wed his mail-order bride. Shortly after arriving in Tate City, Lisa discovers that he's also short-tempered, violent and possessive…and she’s soon fleeing for California, desperate to escape the man she’s promised to marry.

Arriving at a broken-down ranch in the middle of nowhere, Lisa is only seeking a place to hide. She’s dismayed to discover a rugged drifter, Pearce Folsom, in one of the outbuildings. Burdened with secrets of his own, Pearce hides the truth of his past but not his attraction to Lisa. When he steals a burning kiss during the middle of a midnight storm, Lisa knows this handsome cowboy wants more from her than she is ready to give. She can’t truly offer her heart until she is finally and forever free from Donald.

Then, one terrible day, a telegram arrives: FOUND YOU.

“So you’re a mail-order bride?”

The question sent a shock through her body. “How did you know?”

“No other explanation for it. How else would a prairie dog like Ted have found someone like you?”

What is that supposed to mean?, Lisa wondered. Then it came to her: Pearce doesn’t know about Uncle’s death. Despite our age difference, he thinks Ted – he thinks Ted and I…

Outside, the storm was starting to lighten. Its drumming force was now light enough that she could lower her voice and still be understood. She said, “I think you’re confused.”

“I’ve been riding these parts for the last two years. If there was anyone like you in the vicinity, I’d have noticed.”

Despite his weariness, she couldn’t help but respond to his rugged attractiveness. “Well, thank you.”

He moved closer to her. “Don’t I get to kiss the bride?”

He leaned over to kiss her cheek. Startled by the boldness of his action, Lisa turned her head to protest. When she did, his lips brushed against hers. He pressed against her.

As their mouths touched, she felt a rush of heat burn through her body, unlike anything she’d ever experienced before. Need and desire took her by surprise.

The derringer started to slip from her hand, catching her attention as its grip rubbed across her fingers. What’s wrong with me? she thought. I don’t know this man! 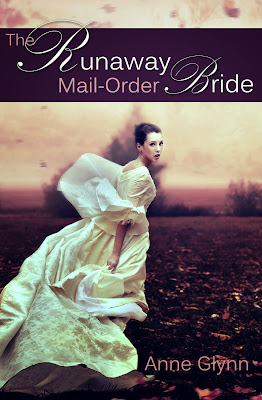 A collector of vintage Barbies and younger boyfriends, Anne Glynn currently resides in the American Southwest.

The truth is a little more complicated. I'm Anne and my S.W.P. (Significant Writing Partner) is Glynn. Together, we write as 'Anne Glynn'.

However, I am a collector of vintage Barbies and I have, on occasion, collected the younger boyfriend. Not so much these days.


There is a giveaway that goes with this blitz. Simply comment on the blitz and one lucky commentor will be choosen to win a copy of the ebook of The Runaway Mail Order Bride.
Posted by Mollydee55 at 2:39 AM