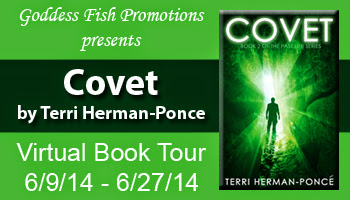 Even if it belongs to someone else.

And some will destroy the very thing they want, just so no one else can have it.

Professional soldier David Bellotti's latest mission seems simple: steal the key card to a drug lord's compound so the empire can be infiltrated and destroyed. But when David discovers evidence of his lover Lottie’s possible infidelity, his mission turns personal. He searches for answers others would kill to keep buried and discovers a link to the past he's been trying hard to ignore.

Ancient lives, twelve thousand year old secrets, murder, and primal instincts lead David on a journey through past lives and present danger—all to save the woman he loves.

Find your way back through history, when hunter-gatherers roamed and David and Lottie's past incarnations began. The Reading Café calls Covet, Book Two of the Past Life Series, "An amazing and fascinating storyline of suspense, mystery, betrayal, hatred and love."

Loud laughter broke out at a nearby table and I used the pulsating lights that illuminated the dance floor to scan the nightclub again. I watched the dealer, careful not to draw attention to myself. He sat on a sofa set back in a dark corner, surrounded by women, beefy bodyguards, and empty bottles of Cristal. And I waited for the lynch pin—the person who was going to set the wheels in motion for the night.

“She’s playing with her hair and she’s staring at you, Bellotti. I think she’s going to make a move soon.”

“Wipe that grin off your face or I'll do it for you,” I told Galen.

“I’m just waiting for the fireworks.” Galen laughed as he picked up his glass. “What line are you going to use this time? You have an arsenal that always seems to piss off women.”

“I don’t piss them off,” I said. “They just aren’t used to honesty. Which doesn’t say a whole lot for relationships or dating these days, does it?”

Galen shrugged. “I think you’re jaded. You walk in with attitude and Armani, turn heads, and then moan about the unwanted attention you get.”

I studied the two of us in the mirror, both in designer clothes, both trying to blend in with the upscale crowd. Only Galen didn't have the harshness on his face that I did. People probably looked at me tonight and saw someone who wanted to break a face. In reality, it was exhaustion. I really needed that damned vacation.

“You’re making too big a deal out of this,” I said.

I was going to say more but stopped when I saw our lynch pin walk into the club. She positioned herself near a granite column off to the side of the dance floor, all long legs, blonde hair, and killer body in a tight blue dress.

Lady in Blue slinked through the crowd, every man's head turning as she moved. Galen stilled and said, “Wow.” 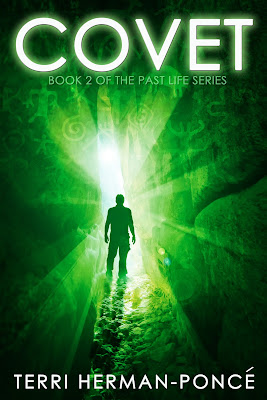 Terri looks for any opportunity to make stuff up. She thinks anything that can’t so easily be explained is worth an extra look and often makes a great story. She loves red wine, scotch, sunrises, Ancient Egypt, the beach—and a host of other stuff that would take too much real estate to talk about. The youngest of five children, Terri lives with her husband and son on Long Island. And, in her next life, if she hasn’t moved on to somewhere else, she wants to be an astronomer. Terri’s fascinated with the night skies almost as much as she’s fascinated with ancient Egypt.

Terri is a member of member of Sisters in Crime and Mystery Writers of America, and you can read about her at http://terriponce.com/.


I asked Terri about mixing romance with paranormal and this is what she had to say:

I have to tell you up front that I'm not a romance author. And I’m not even a paranormal author, at least not in the traditional sense. I don’t write about first meets, and I don’t write about werewolves or vampires. What I DO write about involves soul mates that are linked together through past lives, all wrapped around big suspense.

I know. Sounds kinda offbeat, but it’s what I feel passionate about when it comes to my storytelling. I’ve got two main characters, David and Lottie, who have known each other through several lifetimes. Since, like, the Paleolithic era! Theirs is a love that transcends time, that’s faced ups and downs, joy and sadness, promises and fear. In short–lots and lots of challenge. My books dig into their past. Discover the depth of their relationship. Pit them against enemies (and ex-lovers) that keep coming back, life after life, hell-bent on keeping millennia-old secrets buried at whatever the cost. Including murder.

See, I’m one of those writers (and readers) that love to see couples tested. As a reader, I enjoy the realistic feel of it. As a writer, I find it incredibly liberating because I can focus more on the suspense and mystery angle of my stories. The stuff that really jazzes me up. But—and this is the but that makes me want to sit at my keyboard every day—I lovelovelove challenging David and Lottie. The best romantic elements in a story, for me, are those that dare a couple into making decisions that could destroy their relationship for a greater good. That put them right in the middle of the hardest situations, that ramp up the suspense and the fear and the empathy, to the point that a reader isn’t sure what to be more worried about: the person whose life is at risk or the person who stands to lose the love of their life?

Makes me grin wider than a kid on Christmas morning.

And then, just as David and Lottie’s situation seems to settle down and their relationship is ready to take its next Really Big Step, I’ll throw in another twist that tests them again, and even harder. I guess part of wanting (needing?) to do this stems from my own fascination with real-life couples that, despite the odds, seem to find a way to work together and make things better for themselves. That can strengthen and deepen their love and their friendship to a level that’s…hmm, what’s the word I want…profound. Yeah. That’s it. Profound.

Now, here’s where I really get all charged up. I get to do that for David and Lottie in their current life, but also in every other life they shared previously, and in each and every story. So many possibilities! And not just with my two main characters, but with every other character whose life melds with theirs, from the distant past to the present.

Intrigued? I hope so, because I adore playing with all the different storylines with the hope that readers enjoy reading my stories as much as I enjoy writing them.

Thank you for having me here today! I look forward to chatting with you all, and maybe even making some new acquaintances!