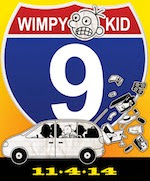 Will Greg Heffley be getting his kicks on Route... 9? Ahead of the Bologna Children's Book Fair, Abrams Books for Young Readers has announced the publication of the ninth title in Jeff Kinney's Diary of a Wimpy Kid series. And as the teaser art Kinney created for the book makes clear, the Heffleys are getting out of town.

"I’m taking the Heffleys out of their home environment and sending them out on the road,” said the author in a statement. “Writing about an epic family road trip has really got my creative juices flowing, and I think this could be the funniest book yet.”

The book is scheduled to be published in the U.S. on November 4 by the Amulet Books imprint at Abrams, with publication in 83 countries to follow shortly thereafter. As with the previous books, readers can expect marketing and social media campaigns for the new book later in the year, including the announcement of its title and cover color. There are more than 120 million copies of the Diary of a Wimpy Kid books in print, and the most recent title, Hard Luck, was the bestselling book in the U.S. in 2013 with more than 3 million copies sold.