Snoopy Returns to the Moon in New Graphic Novel 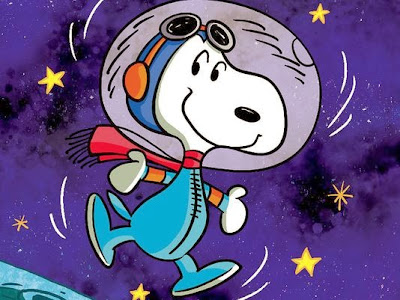 Laika may have been the first dog in space, but Snoopy is by far the coolest.

The famous dog from Charles M. Schulz's Peanuts comic strips and his bird pal Woodstock head off for a cosmic journey in the third Peanuts graphic novel from Boom! Studios, The Beagle Has Landed, Charlie Brown (due out in June). Vicki Scott, who's employed as an artist by the Schulz estate, illustrated the original graphic novel and co-wrote along with Andy Beall and Bob Scott.

Scott worked on the previous graphic novels Happiness is a Warm Blanket, Charlie Brown and It's Tokyo, Charlie Brown that focused on the entire Peanuts cast, with Snoopy providing the comic relief.

With Beagle, though, Scott loved putting him in the lead, she says, as well as making other changes. "As soon as you open the book you will see that this one is visually very different than the other books. A big section is set in outer space! The coloring style is really new and fabulous."

In the story, talk of space has Charlie Brown, Linus and the gang imagining themselves as astronauts, but it's only Snoopy and Woodstock who go to the moon, a sequence where Scott weaves in jargon and anti-gravity gags. (Snoopy's made a lunar jaunt before — in Schulz's strips, the adventurous beagle landed on the moon in 1969 a good four months before Neil Armstrong and Buzz Aldrin.)

Snoopy's biggest problem, though, isn't the emptiness of space or technical issues — it's actually The Cat Next Door who's stolen his food dish.

"The best thing about working with Snoopy and the Peanuts characters is that they are so rich and three-dimensional," Scott says. They are like real people, full of anxieties and dreams and hopes and quirks. Snoopy, too, is such a full character — he is so much more than a dog!"

While Schulz, whom Scott and others still refer to by his nickname "Sparky," spent 50 years with his Peanuts characters, Scott's found that the secret to her job is simply not screwing anything up.

"I pretend Sparky is looking over my shoulder," she says. "I try very hard for my drawings to be more his than mine. Maybe that makes me sound kind of odd, but I get a huge kick out of drawing these characters as 'on model' as humanly possible. It's a big challenge, and I love that. 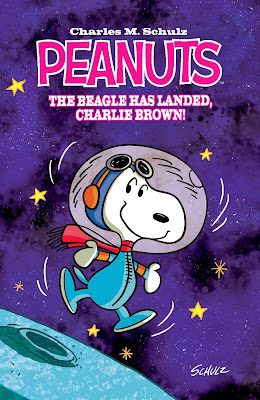