I love the cartoon network and I love their nighttime programming called "Adult Swim". What I noticed here and there, and a lot of these shows are on FOX like Family Guy and American Dad is that they pick on a lot of books. In fact, in one episode of "Family Guy", Peter said "Books are jerks". I laughed.

Let me start with what I can remember. And there are so many examples I would have to hold this blog piece up for days to try to catch the shows where Peter or Stan from "American Dad" or someone else in a cartoon says something about books. I know the Squibillies are not big on books.

Family Guy did a whole episode dedicated to Steven King. They did their own retelling of The Shawshank Redemption, Stand By Me, and Misery. It was really funny. If you know the show imagine Stewie as Annie and Brian as Paul. It was so funny. I tried to find the episode on youtube but had no luck. I wanted to post it in case you are not familiar with the show (live under rocks much? Just kidding!) or the episode. In fact I am laughing because I cannot believe in this day and age people still record onto a video camera a shot of their television and that is what I saw for the Shawshank Redemption. Someone taping the episode off of their television. I will not subject you to that.

Brian Griffin, the dog from Family Guy is writer. He wrote "Faster Than The Speed Of Love" which his publisher sent back to him. All copies back to him. Ups came to his door with 300 boxes. Poor Brian. And his award for Special Literary Excellence (you know I am interested in book awards as well) was not a special award but an award from special as in mentally handicapped people. Brian was not happy when one of the men asked Brian to smell his finger. Brian also wrote "Wish It, Want It, Do It" which hit number three on the New York Times Best Seller List in the episode. Pauly Shore had the first book on the list and Brian was so mad. Brian is always trying to write something. It is a constantly running joke on "Family Guy".

Family Guy recently redid the fairy tales Red Ridinghood, Jack and the Beanstalk, and Cinderalla. Red Ridinghood was my favorite.

Peter Griffin from Family Guy wrote erotica. It started as one story and he showed it to his friends and soon everyone wanted a copy. He got Carter Pewterschmidt (Lois, his wife's father) to publish the erotica. It was called Peterotica. Runny right there. Betty White narrated one of the books as a book on tape and one guy was listening in his car and crashed because he got so excited. Carter, as the publisher, got sued. I laughed so hard.

Stan Smith, the father from American Dad wrote books about an patriotic eagle. He actually wrote over 300 books and got all rejection letters. Then Steve, his son, wound up getting his book about an alien and his silly juice and adventures based on Roger(the alien they are harboring) published.

I know so many other cartoons have given examples of either their own book they made up, or made reference to a classic. I just love that books are so important in our culture that they are spoken of in parody or as reference, even if it is a funny reference.

I enjoy both my cartoons and my books just so we are on the same page. But books were around first and will always be around. I love to hear a book I know mentioned on a cartoon I watch and love when they talk about books in general. It reminds me to shut off the television and go read a book! 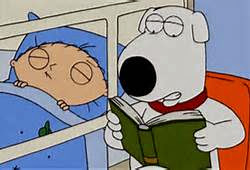