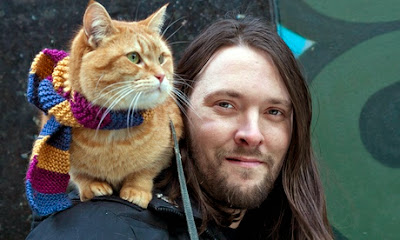 Samuel Johnson used to buy oysters for his cat, Hodge; Charles Dickens was so distressed when his own pet died that he had its paw stuffed and turned into a letter opener. Now, proving that there is nothing the British like more than a heartwarming story about an indomitable feline, the homeless busker turned author James Bowen, who wrote about how his cat changed his life in A Street Cat Named Bob, has joined an elite club of writers to have sold more than one million copies of their books in the UK.

In 2007, Bowen, a recovering drug addict, found an injured Bob curled up on a step when he himself was living in sheltered accommodation. "He gave me this look, almost saying, 'help', but also 'sort it out'," said the author today. Bowen nursed Bob back to health, only to find the cat following him everywhere he went, even joining him when he busked and sold the Big Issue. The pair became well-known in London, going on to attract the attention of a literary agent, who sold Bowen's story of how, with Bob's help, he would get over his addictions to heroin and methadone, to Hodder & Stoughton.

The publisher said today that in just two years, combined sales of A Street Cat Named Bob (written with Garry Jenkins), its sequel The World According to Bob and the children's book Bob: No Ordinary Cat, have now topped sales of 1m copies – 1,082,025 to be exact – in the UK, in all formats. The extraordinary sales bring Bowen into the company of publishing phenomena including JK Rowling, EL James, Stephenie Meyer and Dan Brown.

"It's incredible," said Bowen. "When I first saw Bob on this doorstep, I never thought this is where I'd be today."

Turning up for his first signing, Bowen had expected a maximum of 50 people. "I don't think even Hodder thought there would be much of a turnout, but when there was a queue around the block, when they were turning people away and we had sold over 300 copies, I thought, 'what?' This is just about me and Bob and my life, talking about how I'm not perfect. Why are people so in love with this little man who's come into my life?" he asked.

First published in March 2012, A Street Cat Named Bob has now spent close to two years in the UK top 10 bestseller list, and has also spent over a year on the Sunday Times bestseller lists in paperback – a feat that only 10 other titles have achieved since records began, said Hodder. Sold in 30 different countries, it has topped charts in the USA, Brazil, Portugal, and Turkey, while in Germany, it was No 1 for 27 consecutive weeks, said the publisher.

"I think I've opened people's eyes to things they never understood properly," said Bowen of the book's success. "I never ever thought I would be able to turn my life around … and be the voice of people who can't be heard."

The story clearly struck a chord with the UK's readers. "His book signings have been absolutely massive – attracting up to 500 people at times," said Emilie Ferguson at Hodder, while a poll for World Book Day saw A Street Cat Named Bob chosen as one of the top 10 most life-changing books for teenagers. The story has also been optioned for film, with a screenplay being developed by producer Adam Rolston.

Bowen's agent Mary Pachnos heralded the story's "massive international success", saying it "goes to show that this lovely story, of the mutual love and respect between a man and his cat, resonates around the world".

Bowen is far from the first writer to have had a special fondness for his pet cat. James Boswell, a cat-hater, wrote of the "indulgence" with which Johnson treated his cat Hodge, "for whom he himself used to go out and buy oysters". Mark Twain is also known as a cat lover – " If man could be crossed with the cat it would improve man, but it would deteriorate the cat," he wrote – as were Ernest Hemingway, Dickens and TS Eliot. "Lots of artistic people have cats," said Bowen. "The thing about artists and cats is that cats are the owners of their own souls. They don't have a master, and artists feel that way too sometimes. A person can find a cat their muse. Bob is my muse."

The cat, however, "isn't a deity – although he sometimes gets treated as one," said Bowen. "He gets the most fan mail of any author in the Hachette company, [but] he's still naughty. I've had to put child locks on the fridge."

Bowen, now living in a rented flat, is currently working on a new series of books for children - apparently Bob himself chose the artwork by placing his paw on his approved illustrator - as well as a children's adaptation of The World According to Bob.
Posted by Mollydee55 at 3:54 PM