(from usatoday.com
by Veronica Scott) 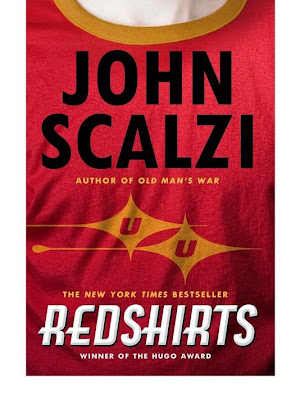 
I recently had a wide-ranging conversation with award-winning, best-selling, science-fiction author John Scalzi, who kindly set aside a portion of a recent afternoon to answer a few questions. I probably went a bit fangirl at some points and was undoubtedly lost in the pleasure of talking author stuff with such an accomplished storyteller, but I did remember to get my predetermined questions into the mix!

Mr. Scalzi was an attendee at the 2013 RT Booklovers Convention, where he accepted the 2012 Reviewers Choice Award in the science-fiction category for his novel Redshirts, which is going to be made into a TV series.

Here's a little background about the author (courtesy of Tor Books): John Scalzi is "one of the most popular and acclaimed SF authors to emerge in the last decade. His massively successful debut, Old Man's War, won him science-fiction's John W. Campbell Award for Best New Writer. His New York Times bestsellers include The Last Colony, Fuzzy Nation, and Redshirts, which won 2013's Hugo Award for Best Novel. Material from his widely read blog The Whatever (whatever.scalzi.com) has also earned him two other Hugo Awards. He lives in Ohio with his wife and daughter."

We began with a discussion about the striking cover for his new book, Lock In, which will be out in August.

The plot summary (courtesy of Tor Books): Fifteen years from now, a new virus sweeps the globe. 95% of those afflicted experience nothing worse than fever and headaches. Four percent suffer acute meningitis, creating the largest medical crisis in history. And one percent find themselves "locked in" — fully awake and aware, but unable to move or respond to stimulus.

One percent doesn't seem like a lot. But in the United States, that's 1.7 million people "locked in" ... including the president's wife and daughter.

Spurred by grief and the sheer magnitude of the suffering, America undertakes a massive scientific initiative. Nothing can restore the ability to control their own bodies to the locked in. But then two new technologies emerge. One is a virtual-reality environment, "The Agora," in which the locked-in can interact with other humans, both locked-in and not. The other is the discovery that a few rare individuals have brains that are receptive to being controlled by others, meaning that from time to time, those who are locked in can "ride" these people and use their bodies as if they were their own.

This skill is quickly regulated, licensed, bonded, and controlled. Nothing can go wrong. Certainly nobody would be tempted to misuse it, for murder, for political power, or worse ...

This led to our first question: What's Mr. Scalzi's favorite scene from the new book?

Turns out, the very first scene where he introduces the protagonist, Chris Shane, is his favorite because he "loves the writer's challenge of putting the reader directly into the world and into the plot." He used the analogy of a roller coaster, where at first you're sitting in anticipation and then suddenly the ride goes faster and faster and you take in that deep breath as the ride becomes super-fast. "If the opening of a book nails it for me," he said, "it's a testament to the author's intent to keep the reader directly engaged from the beginning."

We discussed how Old Man's War begins with John Perry at his wife's grave, which I found very moving and got me involved in the character's fate immediately. Mr. Scalzi said, "It was important to say first thing here is this man who still misses his wife because that will inform everything else that happens to him in that book and over the next four books, including everything that happens with Jane." He went on to say that these aren't books just about aliens and war and cool technology and outer space but about people readers will want to care about.

When I mentioned to a few people that I would be talking with Mr. Scalzi, the one question I got over and over (as in, "Pleeease ask him this!") was: Will we see new episodes of The Human Division? Will there be any more episodes with Dani and Harry? Can we hope for a romance there?

Mr. Scalzi said he would like there to be more with this particular couple and in fact, he's building out the story line for the second series right now. He's happy there's chemistry between the two characters, but he doesn't know whether there'll be more between them until he writes it out. He builds in the personalities as he did with Dani and Harry, and builds the back and forth between them, which shows a clear interest in each other. "So there's definitely something there, and if I can get back to it and explore more of it in the second series, I'm open to that."

He went on to say that it's important to have characters interested and engaged in each other or people won't care what happens to them. He feels the "tension and energy" are there and, depending on the circumstances of the plot, he's "not opposed" to more between Dani and Harry.

This led to a short discussion of writing style, in terms of plotting vs. outlining, and while he was very careful to say more than once that everyone should adopt the writing style that works for them individually, for himself, he "tends to have an idea of where [the plot] needs to go … but tends to make it up as I go along … exploration is important."

There's one episode in The Human Division (The Dog King) that I particularly enjoyed for the humorous aspects and which reminds me a bit of some old Christopher Anvil SF stories.

Mr. Scalzi mentioned a few classic SF writers, such as Harry Harrison, who also had a knack for capturing the humor in their stories. (I loved Mr. Harrison's Technicolor Time Machine and always wished someone had made a movie of it.) Mr. Scalzi says, "Humor is rare in science fiction … there's so little of it that it automatically reminds you of other heroes with that acerbic humor when you find it."

There are so many strong, wonderful female characters in Mr. Scalzi's books — ambassadors, ship captains, soldiers. I asked him if he draws inspiration from his wife and whether she reads the rough drafts.

"She reads as I write, a chapter at a time," he said, adding that she's a good reader for him because she wasn't a big SF reader when they met, so she wasn't used to the tropes and standard ideas in SF. This is useful to him because, he said, if she doesn't follow along on something he's written, he wants to know that. He wants his writing to be "accessible to everyone, so her reading the material is key."

She also "isn't willing to let me get away with crap," he said, and tells him he can do better. His wife's input is instrumental for the strong female characters that appear in his novels and for making sure the entire book and the entire cast of characters are interesting and worth his time to be writing it. "I can handle criticism," he said.

What book by another author would Mr. Scalzi recommend to readers who are new to science-fiction (or fantasy) and might want at least a hint of romance?

Mr. Scalzi said that the fantasy genre offers good relationships. He recommended Mary Robinette Kowal, adding, "Her Shades of Milk and Honey (Glamourist Histories) series provides what people love about the Regency romance novels and making those ideas accessible to modern audiences." He went on to say, "Those who love romances can read Mary for the flavor and the relationships while those who love fantasy can read her books for the magical system she put in place. I love the way she's constructed the world." He specifically mentioned Valour and Vanity, Mary's next book.

I've read Mr. Scalzi's Rough Guide to Sci-Fi Movies, so I asked him if he would recommend a movie for our readers. Several of the movies he discusses in the book are favorites of mine, including the original 1930s Flash Gordon serial starring Buster Crabbe (I keep a framed photo of him on my writing desk, in fact) and also the 1951 The Thing from Another World. We agreed that it was a pity the original movie was overlooked in favor of the more modern remake.

Eternal Sunshine of the Spotless Mind. "Two characters who are trying to forget, yet remember," he said. "Fascination for the way love connects you with someone even if you try to avoid it." The film won an Academy Award in 2005 for Best Screenplay by Charlie Kaufman, Michel Gondry and Pierre Bismuth.

Her. "Not your conventional romance," he said, "but the movie is about connection, what people need in terms of being important to someone and to know someone really cares about them. What makes you fall in love …" The film won an Academy Award in 2014 for Best Original Screenplay by Spike Jonze.

Mr. Scalzi observed that both movies were "really engaged in asking those questions about connection and were a mix of really good science-fiction with really good characters."

How does Mr. Scalzi celebrate when he finishes a novel?

"Sleep for two days," he said. "The more I want a book to be done, the faster I type because I just want to get it out. " He indicated he won't even sleep much for the final three or four days of writing a story, so then because of the fatigue and exhaustion, he sleeps for two days, gets up, eats and goes back for more sleep.

"I don't keep a Bucket List," he said. "I'm open to anything." He credits this to being disorganized, and also he feels it's "more interesting to take the experience of life as it comes and say, yes, I want to do things as the opportunity comes along, vs. just going along down a checklist. Do what you need to do and enjoy life as it happens." (Not that he has anything against other people's Bucket Lists!)

Thank you very much, Mr. Scalzi, for taking the time to chat!

Amazon best-seller Veronica Scott is a two-time recipient of the SFR Galaxy Award and has written a number of science-fiction and paranormal romances. Her latest release is Magic of the Nile. You can find out more about her and her books at veronicascott.wordpress.com. Please e-mail Veronica at scifiencounters@gmail.com about content related to this column. Due to the volume of mail, e-mails may not be answered personally, but all will be read. 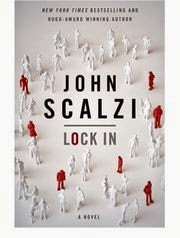 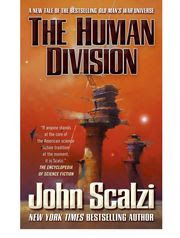