Blindingly White: BookCon, John Green, and Knowing When It’s Time to Speak Up

(from bookriot.com
by Dr. B)

We agree on that, right? As an internet community, we bookish people seem to be in general agreement that (1) there isn’t enough diversity on the BookCon agenda, and (2) BookCon has been basically a primer in how not to do PR in a crisis with their weird silence and increasing slate of white people. (If you have no idea what I’m talking about, catch up with this phenomenal post by Rebecca that explains the situation and the editorial position Book Riot is taking in response.)

Each moment seems to bring fresh idiocy from the BookCon organizers. For example, one of the most criticized panels is the “Blockbuster Reads: Meet the Kids Authors That Dazzle” panel, which Kelly already dissected for you last week. The problem, in a nut shell, is that it’s all white dudes. But then this happened:

Rachel Renee Russell, by the way, is a black woman. She basically handed BookCon an Unfuck Your Shit starter kit, and they didn’t open it. Not only did they not open it; bafflingly, BookCon remained silent through the ensuing bad press. So, a lot of us have been watching the unfolding nonsense with this basic range of facial expressions:

Because one of the headliners of BookCon is John Green, and because John Green was this week named one of Time‘s 100 Most Influential People, and because he’s been unfortunately silent on the issue of the first-major-snowfall-of-the-year level of whiteness of BookCon, there’s been a fair amount of side-eye at Mr. Green lately. Maybe even more so than usual. And there’s usually a lot. But when people are already, “Hey, John Green, it would be awesome if you would take a stand on this thing,” and John Green is really silent about the thing, and then Time tells us that John Green is a prophet in a universal, all-things-connected sort of context

… I kind of think anything less that side-eye would be surprising, don’t you? (Really, Time editors? “A prophet”? Not just a dude who really gets teenagers? Ok.)

Over at Glass Cases, Sarah LaPolla wrote a pretty persuasive defence of John Green in the vein of let’s-be-angry-about-the-issues-without-focusing-our-rage-on-John-Green:

Feminism is about mutual respect and equality. It’s not about tearing one side down to build up another. We should never stop fighting to get women the respect they deserve, and we should get angry and speak out when we see injustice.

An all-white, all-male panel that’s supposed to represent children’s fiction as a whole? Yes, demand answers. People being excited about a writer who happens to be a man? That’s not injustice. We’re all on the same side here. We should be thrilled someone who deserves fame is actually getting it! Like I said above, “book people” are a minority. If we can’t support each other, then who else will support us?

These are fair points. And before I go further let me say: I am a card-carrying nerdfighter (actually, that’s not true because I don’t know if there are actually cards). I am a fan of John Green’s writing (which I occasionally teach), of his vlogs (which I even use in class fairly regularly), and of him as a dude. Like, I think that on the whole, he is a pretty good dude. I like that when people pointed out, “Hey, you do this manic pixie dream girl thing a lot and it’s a crutch!” he responded by saying, “That is a thing I am going to work on!” I like that when people asked him if he thought Laverne Cox should be on the Time list he unequivocally said yes. I like that he champions other YA writers, many of them women. I like that he is often openly willing to be wrong on the internet. I like that he seems to be genuinely willing to listen to perspectives he hasn’t considered before and often allows his mind to be changed.

I think John Green is a talented man, a funny man, a clever man, a savvy man, and above all a decent man.

Sometimes I wish he would speak the hell up.

Sarah LaPolla is right that being a fan of John Green is not the same as being not a fan of another writer. John Green’s success doesn’t take away from other writers. Book people should support each other. I buy what you’re selling, Sarah LaPolla.

The thing is, we can’t pretend John Green’s whiteness, his maleness, and his heterosexuality aren’t central to his brand. They’re essential to his brand. The adorkable, young, slim, non-threatening, able-bodied, bookish, handsome guy who took YouTube by storm (with his adorkable, young, slim, non-threatening, able-bodied, bookish, handsome brother) would not have had the same response if he was a white woman (she’s a fake geek girl), or a black man (he’s angry/scary), or a fat woman (she’s unhealthy/a poor role model/gross), or a genderqueer person (think of the children), or a Muslim woman (let’s debate her hijab or lack of hijab), or a man with cerebral palsy (aw he’s so inspirational!), because he would not have been the fantasy. John Green is the fantasy boyfriend of nerdy girls everywhere, and he combines that with his not insignificant writing talent to be a BIG CULTURAL DEAL. I am not blaming John Green for these things. His success is not undeserved simply by virtue of his privilege. But we can’t divorce him and his success from these things, either.

John Green is aware of his privilege, and I think that’s rad. But, you know, unless he acts on it, that’s kind of like BookCon telling us all that they’re “committed to diversity.” It seems empty when all we’re hearing is silence.

Which is why what I have been desperate to hear over the last few days is John Green saying, “It is not okay that BookCon is so lacking in diversity. I am pulling my name from the event until this is remedied.”

Because really, what does he have to lose? He’s there to sell a movie (not even a book, PS) that literally every teenage girl in the history of time and 85% of their cool aunts is going to see anyway. Does he need the name recognition or exposure of a big convention? No one who is going to buy a John Green book doesn’t know who John Green is. I think, in NYC, it might be safe to assume a level of market saturation.

The thing about being a good ally is that sometimes you have to do the uncomfortable thing to make change, and indeed, one’s privilege in a situation sometimes makes that obligatory. John Green needs to be a good ally here and use his phenomenal power, his formidable reach, and his huge moneymaking self to stand up and tell BookCon that this is not okay.

If you’re going to be called a prophet, eventually someone’s going to expect you to lead us to the promised land. We don’t need John Green to save YA (it was fine before he got there), but we could use his voice and power now.

If I could talk to John Green, I would say, “John Green?” And he would say, “Brenna! Thanks for the constructive criticism. Call me John!” (Because he seems cool like that and because he would notice that I have typed out “John Green” a lot of times in this post.) And I would say, “Okay, John…” 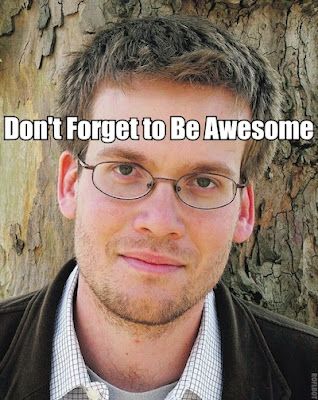