(from usatoday.com
by Madeline Hunter) 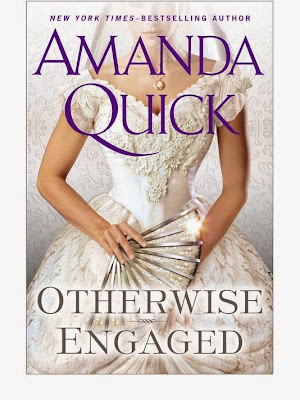 
I first learned about Amanda Quick some years ago from an article about romance novels in The Wall Street Journal. It mentioned her popularity and how she mixes romance with mysteries. I was a reader then, not a reader-writer, and the notion of a romance with a mystery plot sounded good to me. I got one of hers and — oh, my. That book was like a breath of fresh air. Her clever dialogue, her intelligent characters, her breezy style and her very distinctive voice were all revelations. If you have never read one of her historical romances, I urge you to try one. You will see what I mean. Did I mention that her heroes are to die for?

I met her a few years later at my first RWA conference. I had signed a contract, but my first book would not be released for over a year. All the same my publisher at the time had me sit at the signing so I could start meeting readers. Picture me stunned when they informed me I should take the chair next to Amanda Quick. I parked my rear end as ordered, next to this author whose personal style is a friendly type of urban artsy cool, and chatted up the very long line of readers who had come for her books. She was very gracious about my few hours of blatant coattail riding.

By now many readers know that Amanda Quick is one of the pen names of Jayne Ann Krentz. She has been a bestseller many times over. She has also been a strong voice calling for romance to be treated the same as mainstream fiction by reviewers, librarians, etc. She edited and contributed to one of the first books to discuss romance novels as literature. It remains a reference book that continues to help romance shed the derogatory treatment to which it has been so long subjected.

Amanda Quick's newest book, Otherwise Engaged, hit the shelves yesterday (April 22), and the paperback of her last historical, The Mystery Woman, is now available, too. She agreed to an interview.

MH: Please tell us about the new book. Is it a stand-alone, or part of a series, or connected to other books in some way?

AQ: Otherwise Engaged is a stand-alone. It is also the first historical that I have done in a while that contains no paranormal elements. Ahem, that said, the heroine, Miss Amity Doncaster, is a world-traveler who has acquired some unusual skills and a Japanese tessen — a weapon that happens to resemble an elegant fan. The tessen proves handy when she is confronted by a serial killer in London. But that is just the start of her problems. She finds herself embroiled in a great scandal because Society believes that she had a shipboard affair with the mysterious Benedict Stanbridge who turned out to be a spy for the Crown. Oh, and there is also a missing solar-powered device which everyone — the Russians, the Americans and the British — are after. The machine could be used to transform the nature of warfare and a great many other aspects of life as well. Also, the serial killer problem is still at large and still obsessed with Amity. Benedict arrives back in London with what he is sure will be a solution to all Amity's problems — a fake engagement. And then things really get complicated.

MH: Your heroines often have a vocation or avocation that brings them in contact with the hero. Often they are also independent. Have you ever had reviewers or readers claim a young lady would "never do that kind of work"? How do you respond?

AQ: Actually, no, I've never had reviewers complain about my heroines' hobbies or vocations. I think that one of the reasons readers love the historical romance is precisely because it does portray women who go against the expectations of the strict social conventions of the period. The best and most popular romance novels have always given us women who are infused with the ancient heroic virtues: courage, determination, honor and a fighting spirit.

MH: Your books are critically acclaimed and very popular. Is there any element in them that does not get mentioned, but of which you are really proud?

AQ: Well, sometimes I think my research gets overlooked. Maybe I'm a little too subtle about it. For example, the solar-powered device in Otherwise Engaged is based on a real machine that used solar energy. It was developed in the late 1800s and might have proven quite transformative had petroleum not come along …

MH: Does your background as a librarian influence your writing of historical romances? Does it generate story ideas?

AQ: I almost always get my plot ideas from my research. Got Victorian-era cameras in the story? In that case you've got cyanide — an ideal murder weapon — in every darkroom in London. Got an insane serial killer? Then you've got mysterious private asylums where the wealthy warehouse their crazy relatives. Etc., etc. There's no end to the plot twists provided by research.

MH: When in your career did you start writing full time? Any advice for new authors regarding that decision?

AQ: I started writing full time when I was making as much money writing as I did at my day job. Given that I was a librarian, it didn't take a lot of writing income to equal my salary. Today if I were starting over, I would try to build an audience online with indie publishing. At the same time I would take the traditional route and query publishers and agents. Today's new authors have options that were not available a few years ago.

MH: How many books have you published under all your pen names? How many bestsellers?

AQ: I have no idea how many books I've published. I never look back. I do know that I've had over 50 New York Times bestsellers because that's what it says in the bio my publisher puts inside my books.

MH: Do some of your books or series cross pen names and genres? Are there books that are more romantic mysteries or romantic suspense rather than romances with mystery plots braided in? Any Amanda Quick books like this?

AQ: I have always written romantic suspense. I am convinced it is a genre of its own. That said, some of my earlier titles were weighted more toward the romance because that was the market I was writing for at the time. My books have more suspense in them now but on the whole my core story hasn't changed much. And, yes, I also believe that every author has a core story. It has nothing to do with fictional landscapes and everything to do with the underlying themes, values and conflicts that the author works with in the story.

MH: At the risk of feeling like a slacker after reading your answer, I have to ask: What is your writing schedule like? Do you have a page count per day? Do you write more than one story at the same time?

AQ: I don't force myself to hit a certain page count every day. I think in terms of scenes, not pages — but I can't get any sleep if I don't finish a scene each day. No, I don't write more than one story at a time — I can't multitask that way. When I'm working on a story I'm obsessed with it, I can't think of anything else.

MH: Will you share a favorite line or bit of dialogue from your new book?

AQ: After the first love scene in Otherwise Engaged …

"I assure you I am not going to suffer a fit of the vapors just because of what happened in the stables," Amity said. "Couples do that sort of thing quite frequently, do they not?"

Benedict narrowed his eyes. "I believe you remarked that it was no worse than riding a camel."

"Not to worry, sir. One soon grows accustomed to a camel's stride. With time and experience, the jostling and swaying become second nature."

MH: Please share one thing about you that most readers do not know.

AQ: My recipe for Brussels sprouts is so much better than Susan Elizabeth Phillips' recipe. She is still steaming hers. Can you believe it? I roast mine.

MH: You were one of the first writers to publicly raise her voice about the disparagement of romance by the press and the cultural elite. Do you think we have made progress in that area?

AQ: Oh, yes, indeed. There has been a great deal of progress. The romance reader has come out of the closet and the academy now studies the genre with the same attention it used to devote to the mystery genre. However, I think that our culture still has a problem with popular fiction in general because it doesn't really understand the role of popular fiction. Climbing onto my soap box here: The job of popular fiction — a job it has always done well — is to transmit and affirm the core values of our culture. We all know how real heroes and heroines are supposed to act when the chips are down. No matter how flawed or how messed-up they are, in the end they must use the ancient heroic virtues at least long enough to do the right thing. Deep down that is the standard against which we judge our own actions and the actions of others. We learn those lessons from popular fiction. They are at the heart of all the popular fiction genres, including romance.

Find out more at www.krentz-quick.com.

In the last column I shared a video I had stumbled across that showed historical hair-styling techniques. Since then I have been combing the Web and collecting others. I like the one below because it is not long, but shows how all those layered dresses in the 18th century were put together. Enjoy!


USA TODAY and New York Times bestseller Madeline Hunter is the two-time RITA winning author of 24 historical romances. Her next romance, The Accidental Duchess, will be published on June 3. You can find her at www.MadelineHunter.com.