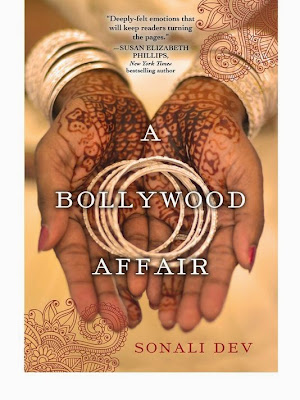 
Today HEA gets to give readers their very first look at the awesome cover to A Bollywood Affair (which comes out in October) by debut author Sonali Dev. Sonali explains both the excitement of seeing the cover for the first and what the cupped hands mean in Indian culture. (To see a larger version of the cover — so you can read that amazing quote from Susan Elizabeth Phillips — click on the blue arrow in the lower right corner of the image.)

Sonali: The best part of being a debut author has got to be this feeling you get of your heart being too big for your chest every time a "first" happens. And seeing the cover of a book you've spent years working on? Everyone should get to feel this way at least once in their life.

From the time I had signed my contract to the time I got to see the cover took a good year, as is common in traditional publishing for a first book. In that time I had imagined a thousand different covers, I'd Photoshopped images with my name emblazoned across it, I'd stopped at bookstores just to caress other covers and closed my eyes and imagined my book there, and then pretended to be thinking when other customers looked like they were going to call security. And then one day my e-mail beeped and there it was. The real thing. My daydreams given visual form.

Just by itself it would've been a perfect moment, but for me it was one I'll never forget. I was at a friend's chemotherapy session and she was doing brilliantly well. The nurses had just told her that her numbers were great and she had this huge happy-overachiever smile on her face as we chattered away while I worked on my laptop. And then it happened. And I forgot what we were talking about, the image on my laptop sending the buzz of voices in the room into silence. I turned it toward her. And then we were both silent together (another first) until the squealing started. My editor had sent me choices. Gorgeous choices.

Once we'd squealed some more and teared up and I'd flashed it at everyone who'd look, the vote was unanimous, this was The One.

In the cover concept sheet I had done for the art department, I had pasted together a whole lot of pictures that represented freedom and yearning to me in the context of Indian culture. My heroine is an abandoned child bride who doesn't let her circumstances hold her back. Like all women all over the world she's trying to walk that tightrope between the roles and expectations society thrusts on her and finding the freedom to be whoever she wants to be.

Somehow, the artist took what I had sent her — a hotchpotch of dancing feet, henna on bridal hands, and cutesy Bollywood posters — and gave me this.

What you see on the cover are hands making an offering, or accepting one, depending on your point of view. It's an age-old Indian concept and there's actually a word for it — Anjali (which, by the way, is a popular Indian girl's name and also happens to be the name of the heroine of M.M. Kaye's The Far Pavilions, one of my favorite books of all time). It is a gesture that symbolizes opening yourself up — giving and accepting gifts with both hands, with devotion and thankfulness. It symbolizes reaching for things, praying for them, but also honoring what you are given, cherishing it. It symbolizes giving without holding back. And it's perfect for Mili and Samir's story.

But also almost lyrically perfect for me as a debut author. What with the fact that the cover is also graced by a quote from an author I idolize.

I'd love to hear what you think about the cover. What does it say to you? Comment and I'll enter you in a drawing to win an e-book of A Bollywood Affair when it comes out. And thanks so very much for stopping by. I hope you'll come see me at SonaliDev.com.

Here's the blurb for A Bollywood Affair (courtesy of publisher Kensington):

Mili Rathod hasn't seen her husband in twenty years—not since she was promised to him at the age of four. Yet marriage has allowed Mili a freedom rarely given to girls in her village. Her grandmother has even allowed her to leave India and study in America for eight months, all to make her the perfect modern wife. Which is exactly what Mili longs to be—if her husband would just come and claim her.

Bollywood's favorite director, Samir Rathod, has come to Michigan to secure a divorce for his older brother. Persuading a naïve village girl to sign the papers should be easy for someone with Samir's tabloid-famous charm. But Mili is neither a fool nor a gold-digger. Open-hearted yet complex, she's trying to reconcile her independence with cherished traditions. And before he can stop himself, Samir is immersed in Mili's life—cooking her dal and rotis, escorting her to her roommate's elaborate Indian wedding, and wondering where his loyalties and happiness lie.

Heartfelt, witty, and thoroughly engaging, Sonali Dev's debut is both a vivid exploration of modern India and a deeply honest story of love, in all its diversity.