I have consistently loved books that I've read when I've been sick in bed.
-Tracy Chevalier

FACE THE MUSIC
A Life Exposed
by Paul Stanley

Few who experienced the power of a KISS concert during the 1970s could have imagined that one of the preening men commanding the exploding stage in makeup and high heels was actually an anxiety-riddled loner from Queens hiding a rare facial deformity called microtia. Growing up, the condition left Stanley half deaf with a "stump of an ear" that prompted sensitive neighborhood kids to jeer him as "the monster." The axe-slinger behind some of KISS' most anthemic songs displays a laudable frankness in discussing those troubled times, made all the more trying thanks to a set of emotionally unavailable parents and a mentally disturbed sibling. The bleakness of the music-obsessed teen's existence eventually drove him to seek out his own psychotherapist. Still, the author possessed an almost uncanny certainty that music would be his life. That unconquerable drive, coupled with a deep and abiding desire to belong to something, brought him into the orbits of three decidedly disparate characters: Gene Simmons, Peter Criss and Ace Frehley. Stanley describes the halcyon days of KISS' formation as the realization of his dreams—but there were problems from the inception. Despite a dynamic conceived as a sort of fun-house reflection of the Beatles, the KISS brotherhood, as Stanley regards it now, was always built on suspect fortifications. Those weaknesses would come to light at the end of the 1970s, after the band had already conquered the world and intra-band friction took hold. Stanley recounts the worst of it—the 1996 reunion tour that, while successful, fell woefully short of the bombastic comeback the Starchild had envisioned. None of Stanley's band mates escape his withering criticism, but Criss is clearly his favorite target. At peace with the state of KISS today, Stanley reveals that the most precious things in his life now are his sense of enlightened awareness and cooking elaborate meals with the wife and kids.

An indispensable part of KISStory. 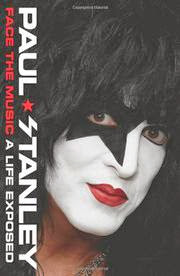 25 Books Ever Writer Should Read