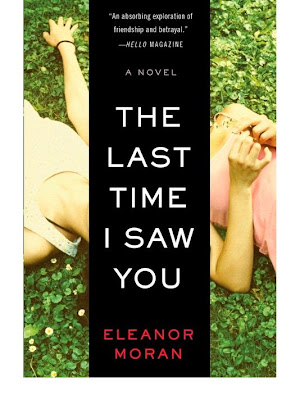 
Eleanor Moran, author of The Last Time I Saw You (reprint comes out today!), joins HEA to share her top 10 love stories — I bet we'll see lots on this list that mirror our own top 10!

I read this when I was 14, and loved it (like hundreds of other hormonal, lovesick 14-year-olds before me). I was asked to speak about it at the Shoreditch House Literary Salon, only to discover that Maxim de Winter is a million miles away from the tragic, soulful romantic hero I'd thought he was back then. He's furiously camp (see the scene where he files his nails and eats a tangerine whilst proposing) and also just plain furious, murdering his first wife to protect his house. No one seems to mind: It is Manderley, after all. For all its flaws, it is still wonderfully atmospheric and suspenseful. The Last Time I Saw You is definitely influenced by it. Haven't we all had our own Rebecca? The ex we can never live up to?

Sense and Sensibility by Jane Austen

My fave Jane Austen. The impoverished Dashwood sisters have wildly divergent philosophies on love; Marianne's a born romantic whilst Elinor is all about keeping her heart in check. Both of them have a lot to learn. One of the few books where the film is almost as good.

Calling this a love story is a bit of a stretch. It's a thinly veiled fictionalisation of Ephron's discovery that her political journalist husband was having an affair whilst she was heavily pregnant. She pulls off the incredible feat of staying funny whilst conveying the agony, all delivered in her uniquely acerbic style. Ephron wrote the battle of the sexes like no one else could (see also When Harry Met Sally). Her irreplaceable voice was lost last year when she died of cancer at the age of 71.

Lots of the great romances have heroes who are total arses, and this book is no exception. Heathcliff's a world of trouble and Cathy's not much better, but you'd have to have a heart of stone to not be transported by their torturous romance. No wonder Kate Bush thought it ballad worthy.

The Wonder Spot by Melissa Bank

I love Melissa Bank. This a bit of an anti-romance, too, in that it's as much about the way love can turn us into self-deluded fools as it is about the moments of unadulterated joy. It makes you feel like you're walking the streets of Manhattan with its lovable, flawed heroine, Sophie, and you can't help but root for her every step of the way.

As romantic obstacles go, your boyfriend being trapped outside the space/time continuum has to rank pretty highly. This one's a total tear-jerker, and worth every sodden Kleenex. Don't touch the film with a bargepole.

Gone With the Wind by Margaret Mitchell

Love against the backdrop of the American Civil War. Scarlett O'Hara is every bit as infuriating as Heathcliff, but it doesn't stop you willing her and Rhett Butler to stop fighting and abandon themselves to their grand passion. One of the most vivid, atmospheric books I've ever read (although not madly politically correct, it has to be said).

After You'd Gone by Maggie O'Farrell

I love the visceral immediacy of O'Farrell's writing, and the mystery that sits alongside the love story makes for a real page-turner.

The Go-Between by L.P. Hartley

Forbidden love is often the best kind. In this instance it's between an Edwardian lady and a tenant farmer, told from the point of view of the impressionable young boy they entrust with their billets-doux.

The Fault in Our Stars by John Green

This book was published as a Young Adult novel, but has been a deservedly huge breakout hit. Time magazine called it "damn near genius," and they're not wrong. It's told by Hazel, a teenager with terminal cancer, who meets the love of her life in the church hall support group that she loathes. Without much time, she and Augustine have nothing to lose, and the journey they go on will see you racing to the end.

Find out more about Eleanor at www.eleanormoran.co.uk.
Posted by Mollydee55 at 9:56 PM