Review of "Vamplets Volume One: The Nightmare Nursery" 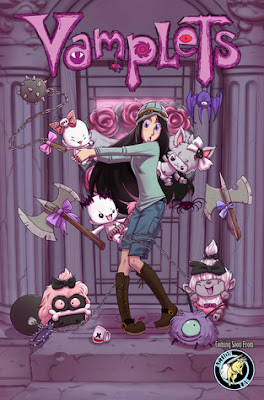 I picked this up at NewYork ComicCon 2013. It was such an interesting cover and the girl who was there signing (the illustrator) was so cute and exciting in explaining it I could not resist.

I am a comic book collector, as well as a book reader so this was perfect.

It is 23 pages and two chapters. It is about a teenager, Destiny Harper, who has her High School graduation coming and nothing on the horizon. So she goes to her favorite place - The Knight Pawn - an antique store, where she feels at home and free. It is here she purchases a special locket that will open up a whole new world to her.

A world overrun by Vampyre babies called Vamplets. A world where she is transported to after answering and ad for "The Night Care Nursery". Which happens to be in Gloomvania where creatures lurk about, and everything is opposite. For example, cute dogs are horrors, but large talking insects are cute.

She thinks she is dreaming and that this cannot be real. Luckily she has Rasket to watch out for her.

As she decides she no longer wants this job, especially after seeing what the babysitting entails, she is told if she does not comply, she cannot go home. So she does her best until one of the babies gets away at a fare and we have a to be continued.

I cannot wait for the next issue to come out!! I do not know if they are doing hardcover (I was lucky to get a signed, limited edition cover from ComicCon). Although it may seem like I told you everything, comic book readers will understand you have to look at the illustrations and pick up the story line to get the full effect. There is nothing even written here that is someway or another not already written on the back of the book.

I would pick this one up it is very interesting and graphically very well done.
Posted by Mollydee55 at 5:52 PM