The Only Gifts We Have To Give Are Our Stories

(from venturegalleries.com
by Caleb Pirtle III) 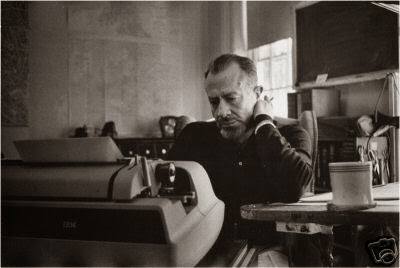 
John Steinbeck had it all figured out.

He didn’t sweat over his words.

He didn’t fight with his Muse and beg his imagination for a new idea.

For Steinbeck, it all began and ended with sheets of paper.

A typewriter was optional.

“There is nothing difficult about writing, he said. “All you do is take a blank piece of paper and fill it up.”

After knocking out several million words in a lifetime, I’m about to believe he was right.

Each day, I sit down to write.

That’s what I do, and my imagination, ragged with age, may as well come along for the ride.

Those of us who spend our lives re-arranging fragmented words on a blank page often forget what we are and, more importantly, what we do.

If that is the case, then we live drab, dull, uninviting, and unimportant lives.

We fail to recognize what we really do.

We forget who we really are.

We’re not novelists, although we may write novels.

We’re not book writers, although we may produce books.

We are storytellers, plain and simple.

And if we aren’t, we should be.

I leave others to produce great literature.

I have no interest in writing great epics.

So is the rhythm and poetry of the language.

And we strive to find a distinctive voice that is our own.

But, in the end, only the story counts.

A decade or so ago, Time Magazine published an article that said, and I paraphrase, the reason why the South has produced so many great writers is that Southerners don’t grow up carrying on conversations. Southerners sit around on the front porches of their homes in the shank of the evening and tell stories.

I tell you a story about my pig.

You tell me a story about your pig.

And we think we’ve had a damn fine conversation.

A story drives home the point that no one forgets. As Philip Pullman wrote: “After nourishment, shelter, and companionship, stories are the thing we need most in the world.”

Nicholas Sparks may not have said it first, but he said it best: Every great love starts with a great story.

A boy is in love.

A girl is in love.

We don’t care until we understand what roads they had to travel, what obstacles they had to overcome, and what struggles they had to endure in order to meet by chance instead of merely pass each other by on a dark and lonely night.

But Nicholas Sparks was only half right.

Every great love also ends with a great story.

And when our time on earth is over, the only real gift we have to leave for those who follow are our stories.

A few we live.

The rest we write.