'Serpent of Venice' Slithers From Clever to Crude

(from usatoday.com
by Charles Finch) 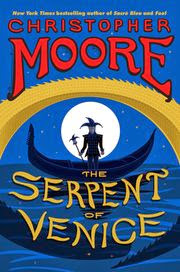 During the reign of Queen Elizabeth, an Englishman set down the stories of characters so memorable that their names endure to this day: Macbeth, King Lear, Richard III. No, not William Shakespeare — Raphael Holinshed, a minor historian who is chiefly remembered now for providing the source material for Shakespeare's plays.

So it is that, in a sense, the playwright himself, always first to every idea, inaugurated the literary tradition of appropriating and re-imagining his characters.

Four centuries later, the most recent offering in this tradition, and far from the worst, is The Serpent of Venice, a mash-up of Othello and The Merchant of Venice by Christopher Moore. It's a book that manages the lovely feat of revering Shakespeare by forswearing any hint of reverence — instead emulating the swift, foul-mouthed and perennially modern tone of the plays themselves.

The hero of The Serpent of Venice is Pocket, an acrobatic and acerbic jester who was also the hero of Fool, a similar retelling of King Lear. Still flanked by a dimwitted giant named Drool and a monkey named Jeff, he finds himself now not in England but in Venice; there, two sets of adversaries are facing off simultaneously: the merchant Antonio against the Jewish moneylender Shylock, and the general Othello against his malevolent subordinate, Iago.

Pocket, who is acidic but good-natured, manipulates these familiar situations toward more satisfactory conclusions than Shakespeare was willing to offer, punning and swashbuckling his way out of a dozen different tight spots in the process. He does so partially by an alliance with the enormous serpent of the book's title, which is patrolling Venice's canals, killing people in gruesome style. Luckily for Pocket, the beast is in love with him.

Amid all of this affable intricacy, Moore's greatest asset is his skill with language. Readers of a certain Monty Python nerdiness will rejoice in its hundreds of insults — "thou treacherous coal-souled wank-weasel" is a printable one — and jokes.

On the other hand, Moore's reading of the characters is uneven, sometimes witty and wise, at others reductive and dully crude. Iago, in particular, defeats him. It must have seemed like a clever idea to make him a madly jealous husband, since that's the fury he sparks in Othello, but in fact, having a motive makes Iago merely banal, a diminished version of the single character in all of Western literature who most chillingly represents the enigma of evil, of malice.

The comedy in Moore's books often depends on an inversion I dislike, by which the people of the past are made to look stupid because the author and the reader, arriving later in history, can snicker together at their ignorance. What's funny is that by the end of The Serpent of Venice, Shakespeare almost seems to have inverted the inversion again.

Serpent is a bright, quick novel, but throughout it, I had the sense that the real Iago might have been standing just off the page, assessing its antic passage coolly and silently — fully aware of all the ways in which the modern world has yet to tell us anything that his creator could not.

Charles Finch is the author of The Last Enchantments.

The Serpent of Venice

Three stars out of four