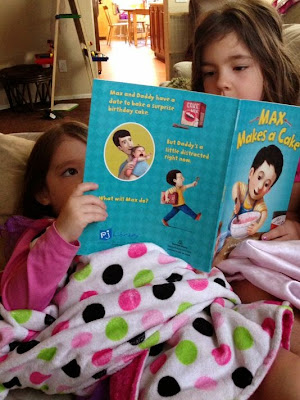 As Passover is celebrated this week, Barry and Barbara Zemel are delighted that their five grandchildren in Phoenix have a deeper understanding of the holiday's meaning because of the books they receive from PJ Library.

The Zemels are among 1,400 Valley families taking part in PJ Library, which sends them free Jewish children's books each month. This year, when the grandchildren went to their mailboxes and tore open the envelopes, they found titles such as: "What I Like About Passover," "The Matzah That Papa Brought Home," "Stone Soup with Matzoh Balls,"and "The Story of Passover."

Their grandchildren — Bella, 6, Charlotte, 5, Julia, 4, Melissa, 3, and Sarah, 1, are growing up in interfaith families so the books help teach Jewish values, ethics, traditions, customs and about life in Israel.

"We love opening up their minds to the vast Jewish heritage through story and song," said their grandfather, Barry, a prominent donor and supporter of the Phoenix program with his wife, Barbara. "It's something fun we can do together as a family."

Passover is the most widely observed of all the Jewish holidays. It is also a time when Jews, "The People of the Book," share the story of their history with the next generation.

"Passover is all about telling the story of the Jewish people," said PJ Library Director Marcie Greenfield Simons. "PJ Library gives the gift of Jewish stories all year long, stories that promote pride and inspire meaningful conversations between parents and children."

In 2005, it was Jewish philanthropist Harold Grinspoon's vision to give children's books to families so the stories could become a centerpiece for celebrating Jewish culture, tradition and heritage. PJ Library, a non-profit based in Massachusetts, now sends books to more than 130,000 children each month in 200 North American communities.

In Phoenix, the program is supported by local donors including the Bureau of Jewish Education and the Jewish Community Association of Greater Phoenix and the Harold Grinspoon Foundation, as well as local synagogues and Jewish community centers.

"It completely reinforces Jewish traditions into everyday life where we do most of our teaching," Barry Zemel said.