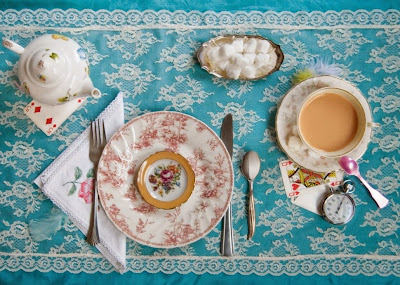 
Famous novels are filled with memorable meals and iconic eats.

Herman Melville’s “Moby-Dick” has an entire chapter dedicated to chowder. “Please, sir, I want some more,” which is perhaps the most famous line from Charles Dickens’ “Oliver Twist,” is about gruel. And who could forget the ‘mad’ tea party from “Alice’s Adventures in Wonderland?”

The project started as a small part of Fried's thesis when she was a graduate student at the Rhode Island School of Design.

“I remember delicious or disgusting, well-described food scenes in books,” she told the Daily News. “I tried it with five photos to see if I could do it and if other readers would respond to it.”

They did, and soon people she knew — and people she didn’t — started offering up suggestions for book-related food photos.

Works Fried wasn’t already familiar that had photogenic meals started making their way onto her night stand, and the project continued after she graduated. It even altered the way Fried reads.

“I notice with greater clarity than ever when anything is consumed in the book,” she said. “I pay more careful attention to the way food is described or cooked or eaten.”

Among the 50 fares featured in the book but not online are the kidney from James Joyce’s “Ulysses” and the Turkish delight from “The Lion, the Witch and the Wardrobe.”

“Fictitious Dishes: An Album of Literature's Most Memorable Meals” is published by Harper Collins and was released on Tuesday.