Love in the Stacks: Romance at the Library

(from usatoday.com
by Christyna Hunter) 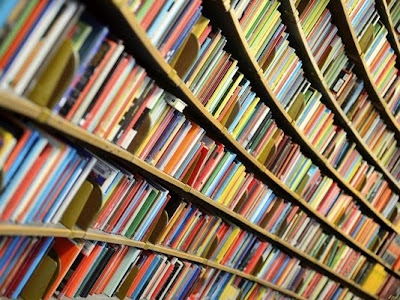 I didn't realize this early in my life. Sure, they were good for book reports and high school research papers. They were even good for (in my case) learning about the birds and bees. But it was in the mid 1990s, while I was in college, that libraries made all the difference.

A college roommate and friend, Marie, showed me my first adult romance novel. Actually, the first passage she had me read was one of the steamy love scenes. (She handed the book to me, told me to read the page with the flipped corner, and winked.) Once all my hormones stopped tingling and pumping, I took a deep breath. My curiosity kicked in. How did these two characters get to this place? And, more important, how did they move on from it?

Enter the public library. When I made weekend treks home, I went to my local public library branch and carefully reviewed titles to find one that shouted romance to me. During my methodical search, I found amazing authors such as Julie Garwood, Nora Roberts, and LaVyrle Spencer. And even if I read a book I didn't end up liking, it allowed me to understand the genre all the more.

By the end of college, Marie had moved away, but we communicated via e-mail, the hip technology of the time. I had by that point surpassed her in the number of romance novels read. And as a joke, she and I ended up exchanging personally created romance stories via that new mode of communication. One day, one off-hand comment had me switching gears. "You're good at this," Marie wrote. "Maybe you should write a romance novel."

Off I went, back to the public library. Titles of different authors and subgenres were read, allowing osmosis of story arc and character development. I learned the Dewey Decimal system, including especially the 808 section. Writer's Market and other reference material on writing and publishing were checked out. And that's where my dreams shimmered, glowed. Were born.

These dreams were not easy. Like any new birth, excitement waned as hard work and frustration flooded my senses. As a bearer of new life, I was unsure of my talents and skills. Sure, dreams were born and nurtured every day. But watching a new creation grow, struggle, thrive was not for a weak heart. Rejection and critique were sometimes constant. Sacrificing time, energy, and sanity was part of it all.

When my dream didn't flourish as I had hoped, I made a new path. The first dream born was The Butterfly's Dance. In 2005, self-publishing was still questioned, but after spending five years learning about the maze of writing, storytelling, and publication, I was dizzy and exhausted. I went my own route and published my book and another one, Wildfire, in 2009.


Even though it was altered, it was still my dream. It came to light because of my public library. Since then, the public library continues to influence my dreams. I am writing this post because of my role as a librarian assistant. I have made connections with librarians who are romance genre enthusiasts.

Co-workers ask me for advice on what good romance novels to read. I get the awesome opportunity to recommend some of my favorite titles, such as The Quinn Brothers series by Nora Roberts (Sea Swept, Rising Tides, Inner Harbor and Chesapeake Blue). I absolutely love this series because all of the men in it have come from very abusive childhoods but have surpassed that to become successful men. And it's the love of one man, Ray Quinn, who adopted these troubled boys and who made them into successful human beings. Now all Cameron, Ethan, Phillip and eventually Seth need to complete their success is the love of good women. And believe me, Anna, Grace, Sybil and Dru are damn good women. Family loyalty and love displayed in this series made me long to be a member of the Quinn family.

Another favorite of mine that I get to recommend is The Gamble by LaVyrle Spencer. Agatha Downing owns a millinery shop in 1880 and is a self-pronounced spinster whose limp was the result of childhood abuse. She despises the town's saloon owner, Scott Gandy, who dares to encourage the town's men to drink and party to the wee hours of the night. Sworn enemies, these two butt heads more than once until an orphaned boy teaches them both about what true family and true love is. I re-read this book at least once a year because it's such a lovely story of how enemies can really have a lot in common if only they took the time to stop arguing.

Phantom Waltz by Catherine Anderson is another favorite. Anderson writes about several people with varying disabilities in her books, which I like to see. (More on that later.) Bethany Coulter and Ryan Kendrick learn together that some limitations can be handled in such a way as to not limit life's dreams, including love and sex.

All of this has been possible thanks to public libraries. Dreams I didn't even know I had have come true.

What dreams are waiting for you at your local library?

Despite being born with a disability, Christyna Hunter has surpassed all perilous predictions. She graduated from college where a friend introduced her to romance novels, started a freelance writing career, self-published two romance novels, and worked at a non-profit organization. Currently she works as a library associate with Loudoun County Public Libraries in Virginia, reads romance novels in her free time, and prays often to her writing muse. Check out her blog at christynahunter.wordpress.com.
Posted by Mollydee55 at 5:17 AM