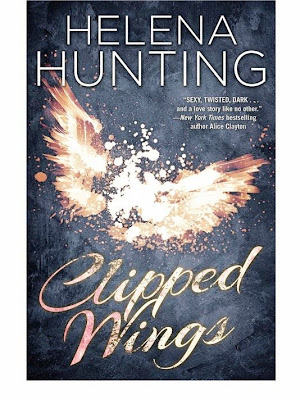 
Body art, namely tattoos have become common in mainstream society. In fact, it's almost as if folks who don't have a tattoo or two are in the minority. In her debut novel, Clipped Wings, and its sequel, Inked Armor, author Helena Hunting explores tattooing as art and the importance of this form of body modification for those who use it as a form of expression chronicling emotional and life-changing events. Helena joins us today to talk about her books, tattooing as an art form and how for some it has significant emotional meaning. Clipped Wings is available now, and Inked Armor will be released on May 13.

Helena: Thanks so much for inviting me to chat!

Lea: The art of tattooing is an overarching theme in Clipped Wings and Inked Armor. Your characters reveal that, for them, body art has far more meaning than just ink designs on skin. You provide a detailed picture of the actual process of tattooing, preparing clients, etc. You seem very knowledgeable regarding tattooing and the psychology behind it. Did you talk to tattoo artists and people who are invested in this form of expression as part of your research?

Helena: I'm fortunate to have a close friend who worked in a tattoo studio. When it came to editing the manuscript, I passed it over to her to read for additional feedback. She's been an amazing source of information.

I've always been intrigued by alternative art forms, particularly that of body modification. I have an affinity for tattoos and piercings. It's wearable art, and in the case of tattoos, the permanency reflects a commitment to the design.

I wanted Inked Armor to feel authentic, allowing the reader a visceral experience of what the shop would smell like, feel like, look like. People who work closely together — in any environment — often have tight professional and personal relationships. Hayden and his colleagues are very much a family, and their shop is a reflection of that.

Lea: Hayden, the hero of your books, is a tattoo artist, and I say "artist" in the truest sense of the word, because he sees tattooing as an art form and is very gifted. Hayden talks about clients who pick out standard tattoo designs from the array pictured in the shop and those who look for something more unique and bring him a drawing or he creates a "piece" from their musings and ideas. Are all tattooists artists like Hayden?

Helena: As in any profession, there is a range of talent. Those who stand out are easily recognized. Their portfolios are extensive; their client base is devout. Above all, they create and foster a professional relationship with their clientele.

I don't know that Hayden represents every tattooist, but I think he's fairly indicative of an "artist." Hayden thrives on the uniqueness of his creations. There's a certain degree of pride associated with a design which speaks to the person for whom it's intended. Unlike paintings, tattoos don't just hang on walls. Those that are displayed in places easily seen beg to be discussed, like any masterpiece.

Hayden is passionate about his art form, and he seeks to fill the desire for artistic individuality through his work.

Lea: Hayden is covered in extraordinary and meaningful inked designs and he also likes piercings. He has a number of facial piercings and essentially defies convention. People see his exterior and assume the worst. It's a case of appearances are deceiving, isn't it? Hayden is in his 20s, and at this point in his life, he doesn't fit the tattooed bad-boy stereotype at all, does he?

Helena: Society dictates standards and norms of behavior, which most people adhere to. Although today the definition of what is deemed acceptable is much broader, thanks to our ever-changing value system. Hayden definitely defies social convention, which was purposeful. I sought to challenge the tattooed bad-boy stereotype with his character. Too often, people see only what's on the outside and apply a negative label to "otherness." Through Clipped Wings, I wanted to step away from the stereotypes associated with body modification and explore the catharsis in committing art to skin.

At 25, Hayden owns his own business. He's driven, intelligent, passionate, and sensitive. But he's a complicated man with a complicated past. His immersion in the body-modification culture allows him to embrace his artistic side. It also provides him with the right tools to identify those who aren't able to see past his unconventional exterior. By covering himself in ink and steel, he's guaranteed to keep intolerant people on the periphery.

Lea: I have to ask: What are viper bites?

Check out this link for a list of common lip piercings and their placement.

Lea: Hayden is psychologically damaged due to a heartbreaking tragedy that occurred when he was a teenager. Tenley is equally traumatized due to her involvement in a catastrophic plane crash. How do these two meet, and how does tattooing affect their relationship?

Helena: Sometimes events in our lives lead us to people with whom we otherwise may not have crossed paths. Tenley seeks to escape her past when she moves to Chicago to begin her graduate program at Northwestern. Her apartment is far from campus, which makes it easy for her to keep a safe distance from her peers. Across the street from her apartment is Inked Armor, the tattoo studio where the very gorgeous, very intriguing Hayden Stryker works. With persistence and persuasion, Hayden eventually convinces Tenley to show him her tattoo design.

Had Tenley not sustained such extreme emotional and physical trauma, she might never have sought to commemorate her losses with ink. Tenley's tragedy allowed her to explore a side of herself she had repressed. Hayden's own past gives him the ability to empathize with her. Through the tattooing process, Hayden is able to uncover the reasons behind Tenley's design, and they form a connection which transcends that of client and tattooist.

Lea: Clipped Wings has a cliffhanger ending, but thankfully Inked Armor, Hayden and Tenley's continuing story, is following quickly on its heels. The titles of your books have special significance. Can you tell our readers why?

Helena: If there had been a huge lag between the release dates, I might have reevaluated the way Clipped Wings ended — although, in the essence of the story, it was the natural break in the books. Not all stories are tied up with a neat little bow. In Clipped Wings, the characters must fight for the future they want, rather than continue to let their past dictate the present.

Clipped Wings is a reflection of Tenley's perceived and literal fall. It's also representative of the tattoo she wants to memorialize her losses. In her former life, Tenley is like a caged bird. Her lack of experience and her choices keep her tethered to a safe and comfortable existence. It isn't until she puts the ghosts that haunt to rest and comes to terms with the guilt that rules her, that she can finally spread her wings.

Inked Armor is a representation of Hayden in his truest form. He is a testament to rebellion, renouncing convention. His predilection for difference keeps most people at arm's length. People are either fascinated by or uncomfortable with his strange beauty. Having lost his parents to a violent death, Hayden is tragically flawed. He wears his loss in permanent art, serving as a reminder of his choices. It becomes a metaphorical barrier with which he can keep people from getting too close. Hayden lets Tenley in past the armor and in doing so, makes himself vulnerable.

Lea: There are strong secondary characters that are awarded significant roles and assist in advancing the plot of these stories. Can readers look forward to returning to the Inked Armor world?

Helena: I would love to revisit some of the characters in the Inked Armor world. Cracks in the Armor, which releases June 23, is a novella featuring Chris and Sarah. I enjoyed writing those two. Chris is a loyal and well-intentioned man who doesn't always think through his actions. For being as smart as she is, Sarah often makes choices that aren't in line with her goals.

Lea: What other projects are you working on Helena?

Helena: Currently I'm gearing up for the Inked Armor Blog Tour. I have an outtake from Chris' point of view that takes place between Clipped Wings and Inked Armor that I hope to share with readers soon. I also have a couple of manuscripts I've been working on which are more humorous than angsty. I look forward to spending time with those characters in the future.

Lea: Thanks so much for taking time out to join us today, Helena. Good luck with Inked Armor and your future work.

Helena: Thank you for the amazing opportunity. It was a pleasure!

Find out more about Helena and her books at www.helenahunting.com. 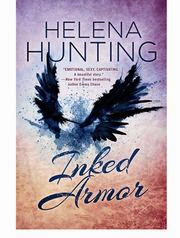