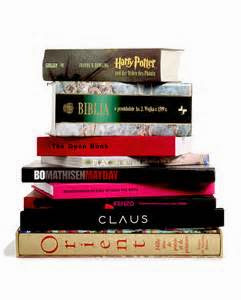 That Girl at 76: Marlo Thomas is 76, but to older Baby Boomers she'll always be associated with That Girl, the hit 1960s sitcom about a single woman in the big city. Now, she's written a book, It Ain't Over...Till It's Over. Click here to watch a video and read Thomas' interview with USA TODAY's Jocelyn McClurg

World Book Night: Wednesday is Shakespeare's birthday. It's also World Book Night U.S. when 25,000 volunteers will give away 500,000 copies of books in a program aimed at people who don't read much or lack access to books. At one of the kickoff events Tuesday night, Garrison Keillor, Malcolm Gladwell and Esmeralda Santiago will discuss their love of libraries and books at the New York Public Library — live streamed at 6:30 p.m. ET at http://new.livestream.com/theNYPL/worldbooknight. On the eve of the first World Book Night U.S. in 2012, I interviewed several of the "book givers."

Bechdel honored: The Lambda Literary Foundation will give its "Award for Excellence in Literature" to Alison Bechdel, author of the graphic memoir Are You My Mother: A Comic Drama, which USA TODAY's Deirdre Donahue praised for "posing an infinity of thought-provoking questions." Bechdel also wrote Fun Home: A Family Tragicomic, which was adapted into a musical and drew the comic strip Dykes to Watch Out For.

Harry does Osaka: Deadline.com reports that Universal Studios Japan plans a July 15 opening for its Wizarding World of Harry Potter theme park in Osaka. Attractions include Hogwarts castle and Hogsmeade, already well known in the imaginations of J.K. Rowling's readers.

Wallace film dispute: In a joint statement, the David Foster Wallace Trust as well as the late author's relatives and publisher Little, Brown have expressed their disapproval of the movie-in-progress The End of the Tour, based on Rolling Stone reporter David Lipsky's 2010 book Although Of Course You End Up Becoming Yourself. The book was based on a five-day road trip Wallace took with Lipsky in 1996. Wallace committed suicide in 2008 at the age of 46. No release date has been announced for the film that stars Jason Segel as Wallace and Jesse Eisenberg as Lipsky.