Gillian Flynn Has Fun Going to Some Very Dark Places

(from usatoday.com
by Joceyln McClurg)

Despite fan hysteria, Gillian Flynn isn't about to give away the ending she wrote for the movie version of her hit thriller Gone Girl, due in theaters Oct. 3, or say how it may differ from the novel.

"But I can assure you it was in my good and dark and evil hands," the novelist-turned-screenwriter says with a bit of a wicked laugh. "It's not turning into a frothy musical or anything."

The release of the movie trailer has sparked all kinds of speculation on the Web, and even Flynn says she gets "goose bumps" from the pulsating peek at the David Fincher-directed feature.

Flynn's darkly twisted 2012 novel about a husband suspected in his wife's disappearance has sold more than 4 million copies, and it was released in paperback this week. The movie stars Ben Affleck and Rosamund Pike as Nick and Amy Dunne, whose fifth anniversary is no cause for celebration.

Flynn, 43, attired in vibrant blue and sporting a baby bump (her second child is due in July), is also aglow over her experience in Hollywood, calling it surprisingly "collaborative and fun." A former TV critic for Entertainment Weekly magazine, Flynn says she and Fincher (The Girl With the Dragon Tattoo) "clicked really well" because they share the "same dark sensibility and same dark sense of humor."

(Some of us are convinced that Gone Girl is a very black comedy about marriage.)

Flynn spent time on the set in the Missouri river town of Cape Girardeau, where scenes from Gone Girl were re-created with such accuracy, she says, "I kept telling David, 'Are you a witch? It's like you pulled this out of my head and made it real.' "

The simpatico pair are reuniting for the new HBO show Utopia, based on a BBC series. "It's a very cool conspiracy thriller with a graphic novel at its heart," says Flynn, who's working on the script now.

Her second novel, Dark Places, about a woman who survived the murder of her mother and sisters as a child, also has been filmed (Flynn didn't write the screenplay). It stars Charlize Theron and Chloë Grace Moretz and is due this year.

Flynn compares her recent success to being "strapped to a rocket," and she has a deal to write more adult novels, as well as her first young-adult novel.

Gillian Flynn for the middle-school set? "Yeah, when I told my husband, he's like, 'Have they read your books?' " She says she grew up loving the books of Lois Duncan, and her YA novel will be in that traditional mystery-suspense vein. No vampires.

And for adult readers clamoring for a Gone Girl follow-up, it might be awhile.

"Last year was all Gone Girl screenplay, and I'm just getting those awful Dunnes out of my head to start writing about different awful people. Different New Awful People: That should just be the title of it."

And she laughs that wicked little laugh. 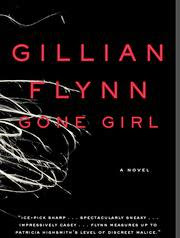 If you want to see and hear the interview, click here.
Posted by Mollydee55 at 12:48 PM