CJ Lyons and Toni Causey: Creating the Cover for 'Farewell to Dreams'


Writers often label certain books as "a book of the heart." For CJ Lyons, her latest release, Farewell to Dreams: A Novel of Fatal Insomnia, has been a true labor of love, starting six years ago when she first encountered the real and horrific disease the book is based on, to now when it is finally being published.

When you've devoted that much time and energy to a book, who do you trust to create the perfect cover art?

If you're CJ Lyons, you turn to fellow author and accomplished artist/photographer Toni McGee Causey.

Here's a peek behind the scenes of the creation of the artwork for Farewell to Dreams.

CJ: What elements from the story inspired your choice of visual images?

Toni: There was a scene so compelling, the image came to life for me. It occurs when Dr. Angela Rossi plays the fiddle with her family. Her health is deteriorating and she doesn't know why, so hasn't told anyone. It's something we can all relate to, that feeling of secret terror that your life is collapsing and you're powerless.

Despite Angela's isolation, her music is her strength. And there was this moment that was so eloquent when the love interest watches her play and he sees into her soul, essentially. We see that he's falling in love with her … and so are we.

That moment was my starting point. Juxtaposing the beauty of her music against the ugliness around her became the inspiration of the image.

CJ: I loved the way Angela comes to life in the art, she feels very real and human — even vulnerable — yet the chaos around her is so surreal that you sense both hope and despair very poignantly. How did you create that tension visually?

Toni: Having been through grief and loss myself, especially with the passing of my brother last year, I understood it on a level I haven't before. This kind of understanding doesn't come from an analytical place; it comes from a gut instinct. For example, I knew with Fatal Insomnia, Angela's time is ticking away. Having the clock as part of the landscape and having it erode away from her it both grounds her and creates that surreal feeling I was searching for.

The hyper-saturated elements around her — the car, the fire, and the doll, your eye goes to them and says, "OK, each element is real — but in an almost ugly way." Because of their positioning and saturation, you feel, I hope, as Angela does, caught between reality and a nightmare. 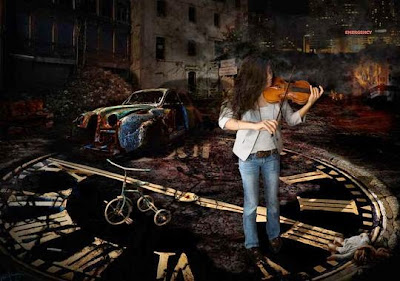 Artwork for the cover of CJ Lyons' "Farewell to Dreams."(Photo: Toni McGee Causey)

From my own experience, I know that when we are mired in grief and loss, the objects around us, objects that should be our touchstones, can often feel distant and part of a foreign landscape. I wanted to create that feeling of loss and isolation in that moment.

CJ: I think you evoked that feeling brilliantly. And yet, there's also hope communicated in the image — just as the story itself also is very empowering and hopeful, despite the fact that the main character has a fatal disease.

Toni: What I saw when I was shooting the model, who is a real-life amazing street musician, was her vivacious energy — and that was the same energy I got from Angela's character. I love music, I play the piano, and there is this ability to get lost in art that protects us from the ugliness of the world and creates a sense of hope.

I don't believe in pessimism. It's too easy to be pessimistic; it's too easy to be cynical in this life. What's hard is to look at what you're facing and to face it with courage and hope. To say, "Even if I don't have much time left, I'm going to do everything I can to the best of my ability, I'm going to go all-out" — and that's exactly what Angela does in the book. She treats every single minute as valuable, and she refuses to give up without a fight.

I loved that about her and wanted that to come through with how the model was shot. I lit the model differently, more brightly, than the background elements to set her apart from the stark and deteriorating world around her.

CJ: I love that visual conflict you created! In fact, one of our early conversations inspired me as I finished the book. You said you saw Angela's music as her weapon to fight the chaos her life was falling into and that it gave her the strength she needed. It was so cool to see that feeling come to life in the final art.

You're an artist. Was it difficult going from a conceptual piece of art to a commercial cover, adjusting for editorial elements, like words, titles?

Toni (laughs): I'm probably one of the weirdest people in the world, but it actually made it easier for me. Since I'm also an author, I understood what the parameters were, so it was easy to create within those parameters.

Approaching this piece, I knew I was still telling a story. It's not enough to be pretty or edgy — the art needs to tell a story that conveys the same emotion to the viewer as the book does to the reader. 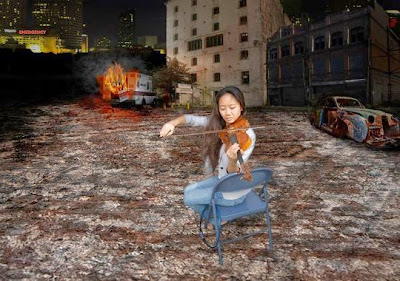 When I began, I was already thinking in those terms. There were several drafts as I got the elements in place — re-sizing them as needed, moving them around. Simple things, like realizing that I had the buildings where the title textual elements would need to go, so I reversed the background image.

Angela's character is so strong and her music brings her such power, that I switched to a shot of the model standing instead of sitting. But for the most part, those decisions enhanced the creative process. I looked at each element, I asked myself: What will this convey? What emotion will it evoke? How does it interact with the other elements of the composition? What story is it telling? Can I tell that story in a better way?

CJ: I love that, because as humans we're hard-wired for story and search for it in any piece of media or art — it's how we make sense of the world around us. So by combining visual story telling with literal story telling, it creates a compelling and powerful multisensory experience.

I want to thank Toni for taking the time to not only create a true work of art for Farewell to Dreams, but also to take us behind the scenes of her creative process.

If you want to learn more about Toni's work, you can find her at www.ToniMcGeeCausey.com.

Here's the blurb about Farewell to Dreams:

In the chaos of the ER, functioning without sleep is a prized skill. But even Dr. Angela Rossi will admit that five months is far too long, especially when accompanied by other worrisome symptoms: night sweats, tremors, muscle spasms, fevers. Then a dead nun speaks to her while Angela is holding the nun's heart in her hand.

"Find the girl," the nun commands—although no one else in the trauma room can hear, the words drilling directly into Angela's brain. "Save the girl."

Falling into catatonic states where she freezes in the middle of a resuscitation and hears dead nuns talking to her? Not good. Maybe she should check herself into her own hospital…except a lost girl's life depends on Angela.

Because the girl IS real. The threat to her is deadly.

Aided by a police detective fallen from grace, Angela searches the midnight catacombs beneath the city, facing down a ruthless gangleader and stumbling onto a serial killer's lair. Her desperate quest to save the girl leads her to the one thing she least expected to find: a last chance for love.

As her symptoms escalate in bizarre and disturbing ways, Angie realizes exactly how serious her illness is. She might be dying, but she's finally choosing how to live…

Find out more at www.CJLyons.net.
Posted by Mollydee55 at 3:31 AM