(from theguardian.com
by Gillian Flynn and Dave Gibbons) 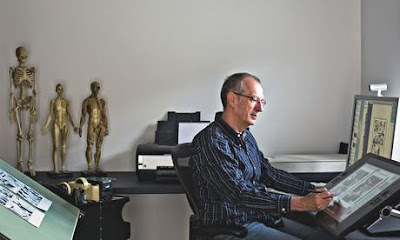 Dave Gibbons: ‘Gillian’s comic was as sinister as I was hoping it would be.’ Photograph: Harry Borden for the Guardian


Working on a comic with a writer is an exercise in collaboration, and the first rule is to leave your ego at the door. That wasn't a problem with Gillian – as soon as we spoke we found we were kindred spirits.

She had a couple of fragments of ideas and I was immediately drawn to the one about masks. It had a chilling quality, and gave me something really fun to draw. I sent her examples of written comic scripts – although I'm known largely for drawing I have written some, too – for ideas of how to do it. You have to be really economical. Gillian took to it well and pared the story down to the essentials. Because comics are such a visual medium it helps if writers have a strong visual sense. It's not like a novel where you have interior monologues.

I'm very pleased with the final comic. It starts off very non-threatening and builds to a fairly horrifying climax. Of course it was Gillian who made the decision that the last page should be one huge image. That shows her understanding of the way it works.

I was expecting a twist because that's what I loved about her novel Gone Girl, which also seems so straightforward and then messes with your mind. Gillian's comic was just as dark and sinister as I was hoping it would be. As a prose story it may not have worked, but as a comic it works very well.

We did lots of working together over Skype. The internet has revolutionised the way you can work with someone. When I first started working for American comics, 30 years ago, there weren't even fax machines. But now I can finish a drawing and it can be on the editor's screen moments later. Of course, that also means artists have been robbed of our old excuses – we can't blame the post office being closed.

I also love interacting with the comics community online. I get feedback directly on Twitter and Facebook – which can sometimes make things difficult, of course. But the reason I'm in the business is because I was a huge fan of comics. I've seen the San Diego Comic-Con grow from 3,000 people in the 1970s to 150,000 people. It's a nice feeling – many of us were the only kid in town who loved comics. You go to San Diego and you think, "This is it, this is my nation. Everyone here is a geek like me." And everyone tells me, geek is the thing. That's what we all aspire to be now. It's very strange. It turns out that Gillian is one of us, too – she absolutely nailed the comic, she has obviously got it in her DNA. I'm thrilled to see what she does next. 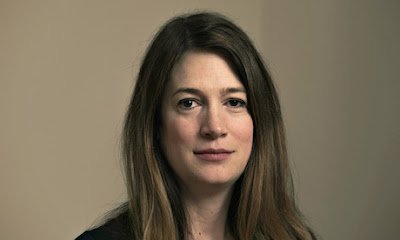 Gillian Flynn: 'Writing a comic is a disciplined art form.' Photograph: Peter Hoffman for the Guardian


Ever since I was a child I've been a huge comic and graphic novel fan, but I've never tried writing one before. Being a novelist you can roam around with a story and indulge yourself. Now I know that it's a real luxury, because writing a comic is a disciplined art form. You just don't have much space to tell the story. I actually found that very freeing. I knew the panels and pages I had, and I had to find a great story for it.

I have a full library and one whole wall is all my bound graphic novels and comic books, so when I spoke to Dave Gibbons (who drew Watchmen among many other comics), I tried not to get too "fan girl" on him. He was very gracious. I had grown up particularly liking the Arch Oboler Lights Out stories – radio serials from the 1930s. You spent a lot of time trying to figure out the story, and at the end there was always the big reveal. Once Dave and I started talking we found we had a mutual love of this kind of story, and I knew that I wanted one where the final page had a big "POW!" ending.

I have a three-year-old son and another child on the way, and I find people's different levels of parenting and how much one tends to hover over a child and worry really interesting. I wanted to investigate, as I tend to do, what happens when that instinct can go bad.

I've thought to myself many times, if I ever saw a child bullying my child, I would go crazy. I've already felt that strong instinct of "do not mess with my child". So the idea came to me to start from there and ask: what if a woman went very far with that?

It was thrilling to see it come to life as Dave sent me the images. As an author, you're used to everything existing in your head. His drawings made my surreal creepy story feel much more real.

I have been collaborating a lot recently – I am working on an HBO series with David Fincher called Utopia, based on the Channel 4 series, which has a graphic novel at its heart. I also worked with him writing the screenplay for the movie of Gone Girl. That helped me switch to working on a comic as it's a very visual way of thinking. What I have loved about working with others is the feeling of being surrounded by people, all with the same aim, and all at the top of their game. It's so far from the usual scenario, where I am alone, down in my office, writing. Of course, occasionally you have moments where you feel like shouting: "This is mine, mine, mine, mine, back off!" But they pass.

I would love to do a full-scale graphic novel. Working on this has only got my excitement up.

Gillian Flynn is the author of Gone Girl. The film version is released in October. Dave Gibbons is an English comic book artist, best known for his collaborations with writer Alan Moore, which include the Watchmen miniseries
Posted by Mollydee55 at 9:27 AM