Visiting Libraries akes Us As Happy as a £1,359 Pay Rise 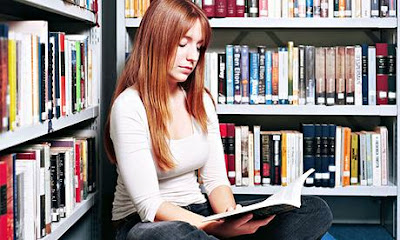 Going to the library is like getting a pay rise, says the survey from the Department for Culture, Media and Sport. Photograph: Alamy


Great news for book lovers. The results of a study commissioned by the Department for Culture, Media and Sport to measure which activities make us happier are in – and the top joy-inducing spots are occupied by dancing, swimming and … wait for it, wait for it ... going to the library. Apparently, the uplift it gives people is equivalent to a £1,359 pay rise.

I know. It's fantastic. Faced with figures like that, especially from research it demanded and paid for its very own self, a ministerial department would have to be mad not to look again at any policy that had, since last year, resulted in an estimated 493 libraries around the country being closed, palmed off to volunteers or facing closure. It would have to be stuffed to the gills with fools, or people who are so unfeeling that they remain unmoved in the face of increasing, quantifiable human unhappiness.

Clearly neither of these things can be the case, and yet no U-turn on the municipal budget cuts that have prompted such closures has yet been forthcoming. Curious.

Perhaps the answer lies in the fact that, as with most social surveys, the results show only correlation, not causation. Maybe libraries, swimming and dancing simply attract happy people rather than making people happier.

This is certainly the explanation the report prefers when it comes to activities associated with lower wellbeing. Going to the gym, for example, was correlated with a level of unhappiness equivalent to a pay cut of £1,318, but the researchers concluded this was probably down to gym-goers already feeling bad about themselves (for being unfit, overweight, unable to control themselves around buns, etc) rather than because exercise or fitness produces misery.

So. To sum up. Nobody knows anything. Common sense – which is to say, massed personal experience, memory, empathy with and knowledge of the propensities, behaviours, motivations and interior lives of human beings – tells us that sploshing about in water, letting the rhythm getcha or being allowed to roam through great rooms full of books containing stories, adventures and the accumulated wisdom of ages, for free makes you happier, while, in itself, the fundamentally unnatural practice of dragging your weary and/or lazy arse to a gym does not. Thousands upon thousands of taxpayer pounds spent on a survey that takes us no further on from what a moment's thought would provide, however, would probably be very strongly associated with making people unhappy.

In other words, the DCMS either commissioned a valid, useful study that proves its ongoing policies are immoral, or it has pissed a lot of dwindling funds up the wall. Could someone commission research into the answer please? I think we should find out.
Posted by Mollydee55 at 2:06 PM