This week, Elizabeth McCracken's outstanding story collection, a true story of a changing brain, and a toy figurine with hidden meaning. 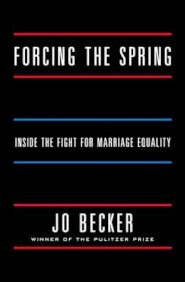 Forcing the Spring: Inside the Fight for Marriage Equality by Jo Becker (Penguin Press) - Channeling the extended legal battle over California's Proposition 8 ban on same-sex marriage into an engaging narrative, Pulitzer Prize-winning journalist Becker presents a thorough, perceptive read. Beginning with private conversations among friends and moving all the way to the Supreme Court, Becker constructs the legal story with the privilege of generous access to the plaintiffs and legal team that fought for marriage equality. Along the way, everyone from President Obama to director/actor Rob Reiner and current Human Rights Campaign President Chad Griffin find their way into the action. 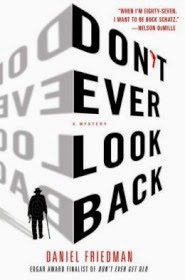 Don’t Ever Look Back by Daniel Friedman (Minotaur) -Edgar-finalist Friedman injects a darker tone into his alternately humorous and moving sequel to 2012’s Don’t Ever Get Old. In 1965, a master thief known as Elijah, a Jew who survived the Holocaust by doing whatever he needed to, invited series lead Buck Schatz, then an officer with the Memphis, Tenn., police department, to join a plot to rob a bank, hoping that their shared religion would make him agreeable. Schatz declined, but despite his best efforts to foil the robbery, and despite a seemingly impregnable bank vault, Elijah pulled off the heist. In 2009, Elijah resurfaces and tells the 88-year-old Schatz, who now resides in an assisted-living facility, “I need you to keep me safe as long as you’re able, and if I am killed, I want you to rain vengeance upon my enemies.” 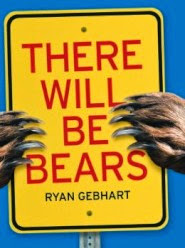 There Will Be Bears by Ryan Gebhart (Candlewick) - Debut novelist Gebhart reveals an uncanny knack for getting inside the brain of a teenage boy wrestling with changing relationships and an onslaught of disappointments. Thirteen-year-old Tyson’s onetime best friend is spending all his time with his football teammates, but that’s nothing compared to Tyson’s fury when his parents cancel his much-anticipated elk-hunting trip with his grandfather, due to Gramps’s health and grizzly bear attacks in Bridger-Teton National Forest. Gebhart gives readers lots to chew on, including Tyson’s realization that life isn’t fair, his recognition of Gramps’s frailty, and lingering questions about manhood. 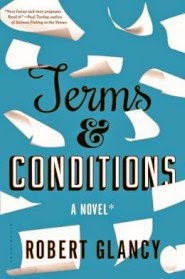 Terms & Conditions by Robert Glancy (Bloomsbury) - Frank Shaw wakes in a hospital bed with amnesia, unable to remember his family, his job, or the car accident that landed him there, in Glancy’s debut novel, a clever office send-up that depicts one man questioning (quite literally) who he is, and who he wants to be. Frank’s memory does slowly return: he’s a lawyer in a London-based family-owned firm, living with his corporate-career-climbing wife, Alice. But as the story progresses, Frank begins to doubt whether everything is as it seems. There’s a secret new group within his firm that resides behind a door no one else seems to see. Alice made her name by writing a bestselling business book, but the mere sight of it makes Frank furious. And why does he have such a fondness for the children’s figurine with detachable organs that he found in the closet at home? 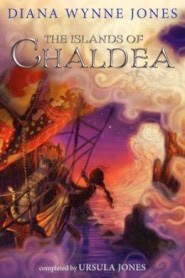 The Islands of Chaldea by Diana Wynne Jones, completed by Ursula Jones (Greenwilllow) - Set in a luminous and beguiling magical land, this standalone novel was begun by acclaimed fantasist Wynne Jones before her death in 2011 and has been seamlessly completed by her sister Ursula, an actress and writer. Just a day after Eileen seems to fail her initiation into her family’s magical tradition, she and her Aunt Beck—a fully-fledged Wise Woman—are sent on a quest to breach the mysterious barrier that separates the islands of Skarr, Bernica, and Gallis from the enemy land of Logra. Accompanying Eileen and Beck are Ivar—the haughty prince whom Aileen plans to marry (“Until then I feel free to admire him greatly in secret”)—and Ogo, an awkward Logran boy. 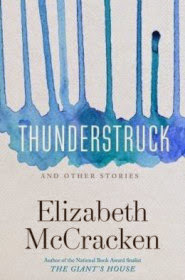 Thunderstruck & Other Stories by Elizabeth McCrackern (Dial) - McCracken’s short stories are like no others. Her distinctive voice, her slightly askew manner of looking at the world, her mix of mordant humor and tenderness, her sense of life’s ironies, and the jolt of electricity at the end of each tale make her work arresting and memorable. In this collection of nine short narratives, a feckless, improvident father mourns the unwitting example he has set for his son; a grieving mother finds solace in a neighbor’s child, while that child’s mother is about to undergo a tragic loss; and a librarian has to live with a disastrous memory. McCracken transforms life’s dead ends into transformational visions. 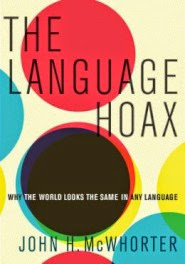 The Language Hoax: Why the World Looks the Same in Any Language by John H. McWhorter (Oxford Univ.) - McWhorter, a linguistics professor at Columbia University, celebrates the diversity of languages and the cultures that speak them in this persuasive rebuttal to the Sapir-Whorf hypothesis, first advanced in the field of linguistics in the 1930s. That hypothesis holds that language channels the way a culture views the world—that Russians, who have two specific words for blue, are more sensitive than other cultures to nuances of color; that the Amazonian Pirahã tribe, whose language has no numbers, don’t know how to count; and so on. 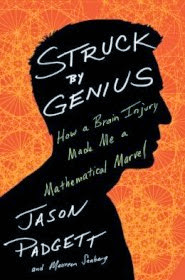 Struck by Genius: How a Brain Injury Made Me a Mathematical Marvel by Jason Padgett and Maureen Seaberg (HMH) - Padgett was, at 31, a man who seemed to care more about his biceps than his career—until a brutal mugging completely changed the floundering course of his life. What initially manifested as an altered, more intense experience of visual phenomena developed into dizzying synesthesia and a newfound, savant-level capacity for mathematics. Pi quickly replaced partying in Padgett’s life. But there were physical ramifications, too: Padgett’s muscles withered into a leaner frame and the former gadfly became almost dangerously prone to isolation, the outside world too stimulating for his new senses. 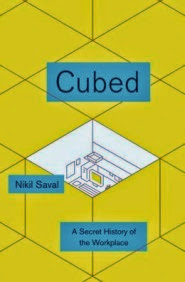 Cubed: A Secret History of the Workplace by Nikil Saval (Doubleday) - Saval offers a detailed social and cultural history of the white-collar workplace. He narrates the evolution of the office in the first decades of the 20th century and tells how “administration and bureaucracy [took] over the world of business.” Along came the typewriter, vertical file cabinet, managers, and efficiency experts to organize this new class of workers. The most influential and ultimately terrifying of these is Frederick “Speedy” Taylor, the father of the time and motion study, who was responsible for “vast caverns of bull pens and steno pools” and “eventually [gave] workers the impression that their work was routine and dead-end.” 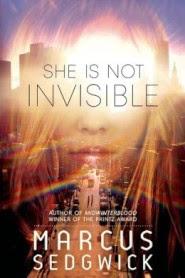 She Is Not Invisible by Marcus Sedgwick (Roaring Brook) - Printz-winner Sedgwick (Midwinterblood) again demonstrates his remarkable versatility, trading the generations-spanning horrors of his recent books for an equally tense contemporary story about coincidence, obsession, and the ways in which we see the world. When 16-year-old Laureth Peak learns that a notebook belonging to her father, a well-known author, has surfaced in New York City, she’s sure something is wrong. Using one of her mother’s credit cards, she buys plane tickets for herself and her younger brother, Benjamin, and flies from London to J.F.K., embarking on a search that takes them across three boroughs. 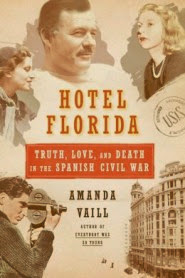 Hotel Florida: Truth, Love, and Death in the Spanish Civil War by Amanda Vaill (FSG) - During Spanish Civil War of the 1930s, American reporters Ernest Hemingway and Martha Gellhorn blustered around with a sometimes daring, often obnoxious self-confidence in their separate quests to get the latest scoops from the front. Vaill (Everybody Was So Young) combines their professional and personal stories with those of their European colleagues, partners Robert Capa and Gerda Taro, and the Madrid Foreign Press Office’s Arturo Barea and Ilsa Kulcsar. Mentioned only rarely, the formerly sumptuous Hotel Florida served as a Madrid base, allowing the courageous, ambitious journalists to interact with Barea and Kulcsar, who convinced their superiors to cease censoring the journalists’ reports. 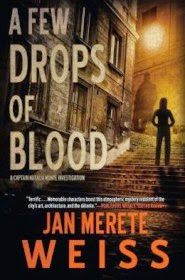 A Few Drops of Blood by Jan Merete Weiss (Soho Crime) - Weiss’s terrific second mystery featuring Capt. Natalia Monte of the Naples Carabinieri opens with a bizarre double murder—the bodies of senior museum curator Vincente Lattaruzzo and gossip columnist Carlo Bagnatti are found naked in a homoerotic pose in the garden of Countess Antonella Cavazza. As Natalia digs into the associations of the victims, she uncovers a welter of relationships that illustrate the ties between the Camorra and the populace and bring into question her friendships with people like Suzanna Ruttollo, who was once married to a violent Camorra boss. 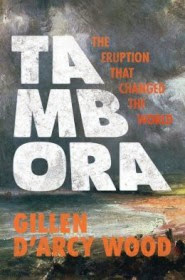 Tambora: The Eruption That Changed the World by Gillen D’Arcy Wood (Princeton Univ.) - The greatest volcanic eruption of modern times occurred in 1815 on the small island of Tambora in the East Indies. It spawned the most extreme weather in thousands of years. In what contemporaries described as the “year without a summer,” its immense ash cloud encircled and cooled the Earth. While historians have mostly ignored the decades of worldwide misery, starvation, and disease that followed, Wood, professor of English at the University of Illinois, remedies this oversight, combining a scientific introduction to volcanism with a vivid account of the eruption’s cultural, political, and economic impact that persisted throughout the century.
Posted by Mollydee55 at 4:31 PM