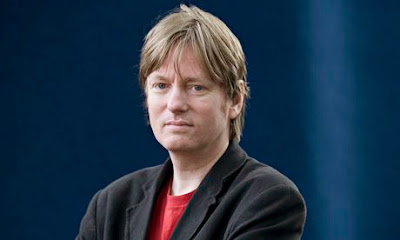 (Michel Faber: 'Nothing beats an artist firing on all cylinders.' Photograph: Colin McPherson/Corbis)


When asked for his thoughts on the comic story we did together, Roger Langridge said, "I generally try to take a back seat as much as I can in any collaboration I'm involved with, as I find a ship usually sails better with only one captain." This reminds me of the vast spectrum of collaborative modus operandi in the comics world, ranging from Alan Moore's habit of writing several pages of directive script for each page ("moss growing in the chinks between the bricks and a slight deposit of soot and grime adhering to the brickwork", etc) and Stan Lee's vague Marvel Method (no typescript, just a chat). In the ship captained by me and built by Roger, I steered a middle course. My original vision for the artwork was a clash of two styles, the ultra-realistic modern American superhero comics and the two-dimensional British slapstick comics. Instead, Roger delivered a more unified style throughout, and it was a delight. Nothing beats an artist firing on all cylinders.

Roger told me: "I went back to Jack Kirby, whose style is the foundational one for the whole genre, and built it from there."

While I dictated the panel layouts, Roger had freedom to turn the politicians into comics characters of his choice. Identifying Ronald Reagan with Modok (Google him if you're not a Marvel fan) is deliciously apt, and imbuing Clint Eastwood's cowboy poncho with "Kirby crackle" is inspired. I love the way one of Arnie/Punisher's guns seems to be shooting Obama in the back. Blair's manic eye, the Widdecombe blimp… For days after receiving the strip, I couldn't stop smiling.

Roger did confess that, despite having fun with the story, he didn't agree with its premise, "but then it's such a tongue-in-cheek idea that I doubt you believe it either! It's a satisfying conceit to hang the story on." I agree that the UK and US were not necessarily shaped by their comics heroes. I do think there's a case to be made for the US's foreign policy having been informed partly by the way heroism has been portrayed in US comics (and movies) – the idea that the solution to all problems is to blow up the bad place and "take out" the bad guy. But that's a discussion beyond the bounds of our wicked little satire.

• Michel Faber is the author of Under The Skin and The Crimson Petal And The White.
Posted by Mollydee55 at 9:35 AM