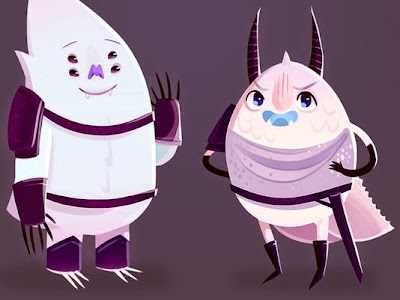 
At San Diego Comic-Con, Arch Enemy Entertainment is all business when it comes to finding new comic-book creators.

"The parties are cool, but we go there to work," says Arch Enemy president Percy Carey.

"You're going to now see a creator at Arch Enemy who draws it, letters it, colors it, writes it, and it's all from their head," says Arch Enemy CEO and founder William Wilson. "We're nurturing that vision and it makes us very excited."

Go back to Seastone City on Mondays for the third issue of writer Michael Sarrao and artist John Broglia's Unmasked, a superhero mystery revolving around reporter Paige Cruise and the enigmatic New Age Heroes.

Tuesdays feature a new chapter of The Counselor, the story of a masked man with a book of all-knowledge created, illustrated and co-written by Thomas Leopold with Robert Heracles.

Wednesday features the 10-page debut of Nicole McEvoy's The Conquering Heroes, a monstrous buddy comedy with an Adventure Time vibe. Then on April 30, that day's slot switches to weekly adventures from Jean-Paul Deshong's samurai epic Sons of Fate.

Toshi's Box, written and drawn by Alexander Lee, is a fantasy series on Thursdays that taps into a love for board games, toys, video games and nostalgia.

The second issue of The Urban Legend — created and written by Josef Yohannes, with art by Stevie "Newtasty" Copter — rolls out on Fridays and continues the adventures of the title hero, a high school teacher by day and masked martial artist by night.

While you're watching cartoons on Saturday mornings, also look out for the third issue of Game Boys, the continuing tale of teenagers trying to survive an invasion, by writer Neil Herndon, artist Eric Moore and colorist Miranda Leiggi.

And Sundays feature the fourth issue of one of Arch Enemy's most popular titles to date, the supernatural thriller The Big Bad Wolf illustrated by Deshong and written by Wilson, Jason Stevens and actor Shane West. 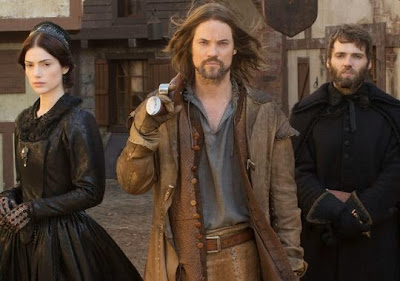 Shane West (center) stars in the new WGN series "Salem" and is also one of the creators of the comic book "The Big Bad Wolf."(Photo: WGN)

Arch Enemy has worked with celebrities in the past, according to Carey, but West, star of the new WGN witch drama Salem (premiering Sunday night 10 ET/PT), leads the way in getting the word out on his series about brother-and-sister bounty hunters — one of whom is slowly becoming a full-fledged werewolf.

"He loves being creative, he loves his fans, he loves comic books, and it all comes from a genuine place," Wilson adds about West and his "Wolf Pack" followers.

"The running joke between me, Percy and Shane is we can't create enough content to quench that thirst of the fan base. They continue to want to see more insight and where Shane and I will take the characters as well as him on this creative journey."

Carey feels that all of the Arch Enemy titles, new and old, are like children.

"We're watching them grow," he says, "and we're proud of them and we've got tears in our eyes because they're about to go out to the world and make their impact on society and become who they're supposed to be."

For more info on past issues and new projects, visit the Arch Enemy website
Posted by Mollydee55 at 8:37 PM