(from barnesandnoblebookblog.com
by Lemony Snicket) 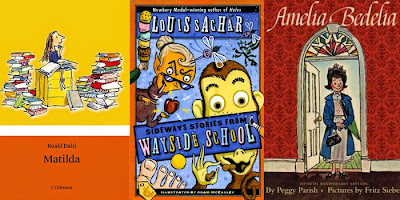 Remember how our parents used to tuck us in at night and send us off to dreamland with stories of a woman the size of a mastadon punishing kids by placing them inside a tiny cupboard studded with nails and broken glass? Or the eccentric proprietor of a magical candy wonderland…that just might kill you? Or women who seem regular, but in reality, they don’t have toes and want to turn you into a mouse? Or every creepy character by Roald Dahl ever? In honor of bedtime stories that give you nightmares instead of pleasant dreams, here’s a collection of our favorite actually insane children’s book characters. Good night, sweet princes. Forever.

Miss Trunchbull (Matilda, by Roald Dahl)
Straight up, this lady is trying to kill kids. She picked up a girl by her braids, whipped her around in the air a few times, and then launched her into a nearby field. Launched. Her. Into. A. Nearby. Field. How is local law enforcement not involved here?! How is The Chokey even a thing?! Why not just waterboard the children instead?! Oh wait, she kind of did that, only instead of water, it was chocolate cake. Trunchbull is bringing everyone a whole world of pai,n and the only thing that can stop her is a haunting.

Count Olaf (A Series of Unfortunate Events, series by Lemony Snicket)
Um. Wow. Well, where do we begin? Count Olaf casually starts fires at every opportunity. He will slaughter anyone for any reason, nbd. He is totally okay with marrying a 14-year-old child for her inheritance. He releases pathogens. He crashed your car into a bridge and watched and let it burn. He doesn’t care. He loves it.

Mrs. Gorf (Sideways Stories from Wayside School, by Louis Sachar)
Lots of people wanting to turn kids into other things on this list! In Mrs. Gorf’s case, when her students do something bad, she turns them into apples. When the students eventually realize how seriously effed this is, they hold up a mirror and she accidentally turns herself into an apple. She then gets eaten by the groundskeeper Louis. The children have no remorse, and Louis is now kind of a cannibal. Everyone is on a slow path to destruction.

The Man in the Yellow Hat (Curious George, by H.A. Rey)
Pop quiz: what’s actually the most curious thing about this book? Someone please look at the getup on this man. He wears a full yellow jumpsuit every day WITH a large matching hat, and treats a monkey like a human. Why is he dressed like that? What is his job? He definitely has a basement full of bones.

The Grand High Witch (The Witches, by Roald Dahl)
Here we go again. Was Roald Dahl okay? No, but seriously. Every book he wrote had a psycho person in it. He was ALWAYS trying to off a bunch of kindergartners—or at the very least scare the crap out of them. And the Grand High Witch is no exception. She can pull her face off. She has talons.

Amelia Bedelia (Amelia Bedelia, by Peggy Parrish)
If you told someone to dress a turkey and they went and put baby clothes on it, you would avoid making sudden movement so as not to agitate this person, right? You wouldn’t take unnecessary risks around them, you’d remove the knives, etc., etc. Because regular, non-insane people understand how to interpret requests. Maybe if you don’t cook, you don’t know what “dress a turkey” means, but you sure wouldn’t put a onesie on it. That’s what a crazy person would do. Or someone who has had a serious head injury. Actually, maybe that’s it? Okay, we take it all back if that’s what happened.

Eeyore (Winnie-the-Pooh, by A.A. Milne)
No, not “literally insane,” but still worth a mention. This poor lil’ guy is struggling with clinical depression and we get the impression he thinks this is just the way it always has to be. Plus, there’s no known means of getting help in the Hundred Acre Wood. He’s on this list not because we’re afraid of him, but because we’re afraid FOR him and don’t want him to fall through the cracks. Why so blue, Eeyore? We notice you, we swear! Seriously, WHO HURT YOU!?

Beth Ellen (The Long Secret, by Louise Fitzhugh)
In this companion to Harriet the Spy, Harriet’s friend Beth Ellen totally goes off the deep end and starts writing anonymous notes to people in crayon. She’s 12 years old, she could use a pen. But no: she uses a red crayon, which is far more sinister.

Miss Frizzle (The Magic School Bus, series by Joanna Cole)
Hear us out. This lady gets into a “magic bus” (which already sounds like a euphemism for doing all the drugs) and then drives it into people’s bodies and the Earth’s crust and stuff. A school bus is in no way equipped for those kinds of trips! How does she know the magic won’t just suddenly wear off one day while they’re checking out the inside of a volcano? Also, did she get parental permission before she stole their children and then got lost in space? No! She is essentially kidnapping these kids every single day of their lives. There will be repercussions for this. Trust issues, probably.

Willy Wonka (Charlie and the Chocolate Factory, by Roald Dahl)
And why not close out this list with yet another batshizz creation from the mind of Roald Dahl. Willy Wonka lives in a candy factory with a bunch of tiny slaves he stole from Loompaland. He watches, expressionless, as children are slowly picked off one by one—and their parents, too, in some cases. He is the original “Come into my van, little boy. I have candy!” monster your parents warned you about. Only instead of a van, he has an entire factory. OF HORRORS.

Who’s the craziest character in kids’ lit?
Posted by Mollydee55 at 10:06 AM