(from bookriot.com
by Derek Attig) 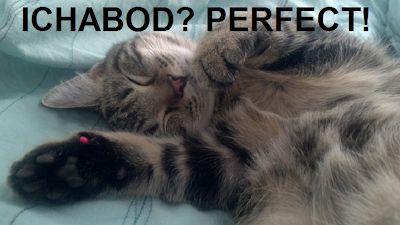 In telling the story, I also suggested a passel of awesomely literary cat names. But over the past year, I’ve felt like I left all my dog-people friends out of the fun. So here are some amazing, incredible, sometimes ridiculous names, all bookish. Wouldn’t one of them be perfect for your next dog?

The Obvious (but still pretty awesome)

There seem to be more named canine characters in literature than feline, so you can pretty easily go down an obvious route and name your dog after a literary dog. There’s Pongo, Buck, Tock, Cujo (if you’re a risk-taker), Blue, Clifford, Pugnax (perfect, obviously, for a pug), Zar, Dogmatix, Snowy, Toto, Wellington, or Searchlight. If you want a more fanciful (or at least more complicated) obvious name, try The Hound of the Baskervilles, Disreputable Dog, or Know-Nothing Bo the Non-Wonder Dog.

All the World’s a Stage (for your dogs’ antics)

Where cats often don’t seem to care whether you pay attention to them or not, dogs live to perform and for applause. A theatrical name is thus ideal. As might be expected, if you want to go in that direction, Shakespeare’s a font of naming options. There are elegant ones (like Timon, Horatio, Oberon, Fortinbras, Lennox, Cymbeline, Gertrude, Laertes, Mercutio, and Titus), mildly goofy ones (like Ajax, Banquo, Macduff, Iago, Rosencrantz, Guildenstern, Snug, Benedick, and Mopsa), and just plain gonzo ones (like Bottom, Dogberry, Gobbo, Peaseblossom, Oatcake, and Doctor Butts). If your theatrical tastes run more minimalist, and more modern, there’s Pozzo, Estragon, and Godot. Or if you’re in the market for something really spectacular, you should try Topdog/Underdog. Come on. You know you want a pet with a punctuated name.

Classics (in several meanings of the word)

Geeky (and nerdy, too)

Dogs aren’t, I think, quite as geeky/nerdy as cats, to be honest. But they do—like their cousins wolves—pop up with some regularity in fantasy literature. And there are some good options in this geeky direction. In a nod to my partner, who loves the still-abortive Exiles trilogy, what about Glenin, Ambrai, Maichen, Cailet, Agatine, Val, Falundir, or Gorynel? Or, since what are dogs but even furrier little hobbits, we could go with Took, Flambard, Bungo, Jolly Cotton, Proudneck, and Nob. And then there’re the geek-a-riffic authors themselves. Try Russ, Ursula, Abbott Abbott, Ballard, Bradbury, Rawn, Janusz, Scalzi, Aldous, and more.

Bookish (in another way)

I’ve always been a fan of dogs named after things. (I’ve long wanted, for example, a corgi named Lunchbox.) So what about dogs named after bookish things? Like Folio, Atlas, Database, Index, and Stacks. Or Pages, Paperback, Dewey Decimal, Endpapers, Bookmark, Dogear, or Interlibrary Loan.

What am I missing? What other literary names would be perfect for dogs?


*Blogger's note: I would love to hear your literary dog's names. I have a few good ideas but my dog is already named. My next dog will be from a Neil Gaiman book you betcha!
Posted by Mollydee55 at 7:54 AM