Joe Satriani Surfs Through His Career With Box Set and Book

(from usatoday.com
by Marco della Cava) 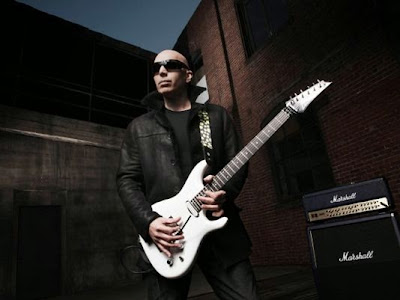 
For a guy who can shred like a demon, guitarist Joe Satriani comes off like the mellowest of angels.

Walk into his house in the tony Pacific Heights neighborhood of this hilly town, and you're greeted by a smiling bald man exuding an aura of calm. Shuffle downstairs to his small home studio, and the only sounds are those of feet on creaking floorboards. His voice rarely rises above librarian levels.

"Can I get you anything?" he asks.

Well, yes — how about the real Joe Satriani? The raging maestro whose 1987 instrumental Surfing With the Alien won him ax-god status, who channeled every guitarist the Rolling Stones ever had while touring with Mick Jagger in 1988 and who most recently helped classic rock supergroup Chickenfoot race up the charts?

Turns out, Smokin' Joe — as Chickenfoot bandmate Sammy Hagar calls Satriani, 57 — is there, he just needs a stage to let loose.

"I'm basically a very shy person," says Satriani, who insists that his guest take the comfortable home-studio chair while he sits on a stool. "But as a kid, I was bitten by that thing called 'being onstage.' And that was it."

Satriani's musical journey is now on full display in a new 15-disc box set (Joe Satriani: The Complete Studio Recordings, out Tuesday) and an autobiography (Strange Beautiful Music, with co-author Jake Brown, due May 6).

That trip started on Long Island, where young Joe recalls being mesmerized at age 6 by the opening riff of the Stones' Satisfaction. "My reaction was visceral," he says. "It's like a cosmic chiropractor said, 'OK, now you're aligned.' "

Next, cue up a familiar brew of future rock-star influences, from older siblings passing on the day's hot records (lots of Beatles, Jimi Hendrix and Led Zeppelin) to hours of practice giving way to cover-band duties — the most incongruous of which was his teenage time in City Funktion, an all-African-American funk band.

I had a vision that I wanted to live on the edge a bit.

"I played anywhere I could," Satriani says. "But pretty soon, I came to a crossroads. I loved being in a band, but sometimes, it was worse than having a day job, finding clubs, being turned down, doing it again. I had a vision that I wanted to live on the edge a bit more."

That led Satriani to move cross-country in the late '70s to Berkeley, Calif., where he began a decade-long teaching gig to help pay the bills.

"Joe quickly became the dude in the Bay Area when it came to teaching," says Michael Molenda, editor of Guitar Player magazine. "Getting lessons with him was the holy grail for many players."

The last of which was none other than Kirk Hammett, then a new member of Metallica who was desperately searching for solos to play over the decidedly strange chord progressions conjured up by his band.

"Kirk and I would sit there and deconstruct what James (Hetfield) was doing, because he couldn't play traditional blues riffs over that music and make it work," says Satriani, hauling out one of his signature Ibanez guitars to demonstrate.

Meanwhile, what worked for Satriani was turning into a wild mix of things. After enjoying significant local success with a short-lived band called The Squares, he used credit cards to finance a five-song EP (on a label he named after his wife, Rubina; they have one son, Z.Z., 21). He escaped going into debt by taking a job with the then-hot Greg Kihn Band (hit single: 1983's Jeopardy).

"Greg saved me," Satriani says. "I was a moment away from being broke."

Then came Alien, an infectious rock instrumental that made Satriani's name, along with tender hit Always With Me, Always With You, followed by the invitation from Jagger.

"It was crazy," Satriani says. "One day I'm not sure what's going on with my career, and the next, I'm up there (onstage) with Mick, and he's letting me do my two hits in the middle of his show."

Satriani shakes his shiny head. The next decades saw him solidify his status as an instrumental master in the deliberate vein of his idol, Jeff Beck.

Albums followed, as did his G3 tours, which paired him with other guitar virtuosos, including Kenny Wayne Shepherd, Eric Johnson and, notably, Steve Vai (formerly of Frank Zappa's and David Lee Roth's bands), who grew up with Satriani and was among his first pupils. "I knew very early on that this kid was going to be way better than me," Satriani says.

That's like arguing who's the better painter, Monet or Matisse. Point is, "Satriani has helped move the instrument forward, crossing over into the mainstream without dumbing things down," Molenda says. "He doesn't just hit the right notes, but he plays those notes perfectly, like (Frank) Sinatra phrasing a line." 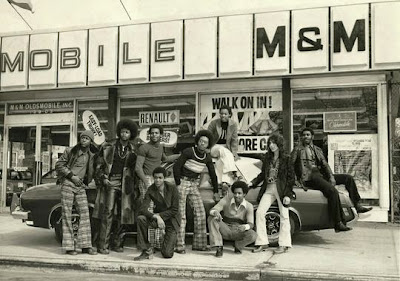 
Frontman Hagar, who knows a thing or two about epic guitarists, thanks to his time in Van Halen, says, "Joe is the only shredder I know who can tell you every note he's playing. He's a unique person, a genius musician who can also rock as a player."

"Joe loosened up," he says. "When you're playing with me and Michael and Chad, if we hit something perfect, we aren't doing it again."

Bring up Chickenfoot and, if it's possible, Satriani gets even quieter. He wants nothing more than for the gang to reunite for a third album, but he has been told that's not likely in the cards.

"I get it. They're all Rock and Roll Hall of Famers, they've done it already. But for me, this was my dream come true," he says. "It's the band I never got in as a kid."

Satriani pulls out his iPhone and plays a dozen audio clips — most are wildly catchy power-chord progressions. "Don't you think these would be great stuff for Sammy to sing against?" he says hopefully.

For now, Chickenfoot isn't walking into the studio. So Satriani will pick up his guitars and Marshall stacks and hit the road, with June gigs back East (including a June 9 performance at the Iridium Club in New York that PBS is recording) and a G4 guitar summit in Cambria, Calif., Aug. 11-14.

What about another book?

"Maybe. It was cathartic to write it," he says. "I saw all the things I did wrong."

"I should have spent more time hanging out with my friends and having fun, instead of practicing guitar in my room all the time," Satriani says with a laugh.