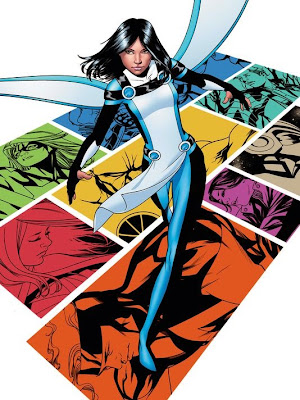 
Back in the day, superhero names came pretty easily with Superman, Batman, Captain America and their ilk.

Not so for writer Jeff Lemire and the brand new heroine he introduces Wednesday in DC Comics' Justice League United, debuting with a zero issue illustrated by Mike McKone. Ultimately, Lemire settled on Equinox because it avoided other cliché Native American monikers such as Shaman but also reflected the teenage girl's personality and her powers.

It was just tough finally finding a name that wasn't one Google search away from being an obscure Spider-Man bad guy.

"After 75 years of Marvel and DC publishing superhero comics, every single possible iteration of a name has been used as a hero or a villain," Lemire says.

"You can't predict which new characters you create will stick around and which ones won't, but if you try to create something you actually like and you want to read, chances are someone else will, too, and you go from there."

A part of the central hero group including Adam Strange, Martian Manhunter, Hawkman, Stargirl, Supergirl and Green Arrow, Equinox is important for Lemire because she is the first major DC character he's created, hails from his native Canada and also is part of the Cree, one of the Canadian indigenous people in the First Nations.

From a storytelling point of view, Equinox is the reader's way into the new adventures of this superhero crew, starting at a pop-culture convention in Toronto and leading to splitting time between Northern Ontario and the planets such as Rann and Thanagar with the group's new cosmic modus operandi.

The first five issues of United are "like a snowball," Lemire says. "They head to Canada and things happen so fast that no one has time to catch their breath or really figure out what's going on until the end of the arc."

He adds that the quest they'll have in space "really sets up some things for the next arc, which has pretty wide implications for the DC Universe in terms of new cosmic threats."

For Equinox, though, she'll have to wait a whole story arc to see the galaxy. That's just one aspect of many ways the teen's life is changing in a big way.

"She's from a small community and has never really been outside of that, let alone seen any of this fantastic superhero stuff going on around her," Lemire explains. "But she's got a good sense of humor and she's become the most relatable character in the book so far."

Equinox will be dealing with her new powers, which change with the seasons and connect to both the land and the weather. Her family's history is part of the secret around her abilities, and like most young people, she struggles with leaving home for the first time.

Add all of that on top of being introduced to a busy universe full of good and evil, and "it's going to be a pretty emotional experience for her," says Lemire, who also writes DC's Green Arrow comic.

In the group dynamic, Equinox won't fit in well with the other teenage girls, at least at first — then again, Stargirl and Supergirl aren't too fond of each other either, Lemire says. "Stargirl is really eager and optimistic and trying, and Supergirl doesn't have much time for her."

They're a contrast to the bromance of Green Arrow and Animal Man. "They pretend to hate each other and they're obviously in love with one another," the writer says with a laugh.

Instead, Equinox will be spending quality time learning from Adam Strange's wife, Alanna — "There's an interesting connection," Lemire says. "They're both Canadian characters and women of color" — as well as Martian Manhunter, a favorite of Lemire's since he was a kid.

"Manhunter is the heart of the team, and he has a relationship with everyone," the writer says. "He's the most alien character in a way and probably the most shocking to (Equinox), but also the most warm and welcoming."

Big stuff is on the way for Hawkman — "He will not be the same character he has been (since the New 52 relaunch) by the time the first arc's done, that's for sure," says Lemire, who's leaning into the character's spacebound background and reintroducing his old villain Byth as the main baddie of the first arc.

But, the writer adds, Byth's "the tip of the iceberg. There's something bigger at work there that he's a part of."

The first appearance of the original Justice League lineup in 1960 brought disparate heroes together to fight Starro, and the Justice League United group have a similar moment that unifies them in issue 3.

Before and after, Lemire is promising humor to go along with all that adventure.

"I've grown tired of the ultra serious, grim and gritty superhero stuff that's become prevalent lately," he says. "I want to get back to having some fun." 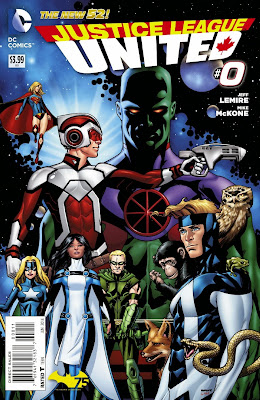